Words matter. And when you are the director-general of ASIO, and one of the few people in the Australian Security Intelligence Organisation that can talk to the public about what you do at work without being in breach of the law, then your words really matter. To his credit, Mike Burgess has made it his mission to “to make ASIO more open and transparent”.

His second annual threat assessment, for all its droll, candid delivery, was provocative and revealing in its carefully chosen words. And yet, on one point, it was also unexpectedly perplexing.

Read more: ASIO to avoid 'left', 'right' and 'Islamic' in an overhaul of its descriptions of extremism

When Burgess delivered his first annual threat assessment in February last year, shortly after assuming the leadership of ASIO, he spoke with refreshing frankness about the rising threat posed by right-wing extremism:

Right-wing extremism has been in ASIO’s sights for some time, but obviously this threat came into sharp, terrible focus last year in New Zealand.

In Australia, the extreme right-wing threat is real and it is growing. In suburbs around Australia, small cells regularly meet to salute Nazi flags, inspect weapons, train in combat and share their hateful ideology.

His deputy director, Helen Cook, continued this pattern of plain speaking when she addressed a parliamentary inquiry last September. She pointed out the parallels between the ways in which right-wing extremists were recruiting online and the methods used by Islamic State. 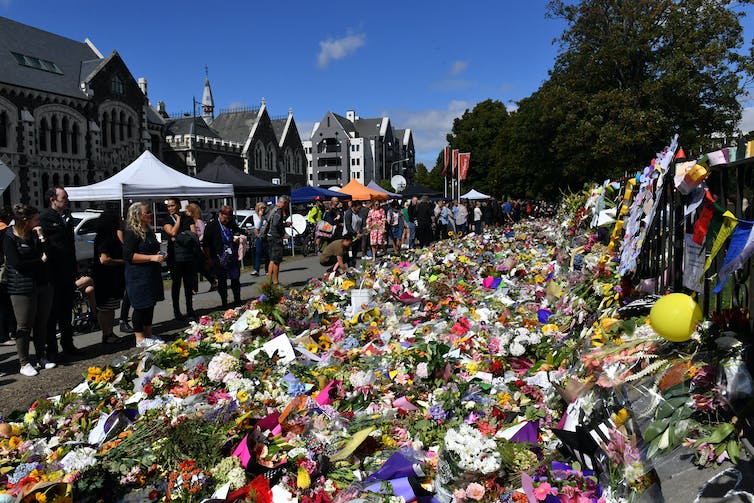 The rise of right-wing violent extremism came into terrible focus during the Christchurch terror attacks in 2019. Mick Tsikas/AAP

Last week, Burgess said that proportion was now 40%. Internet recruitment had spiked during during pandemic lockdowns:

For those intent on violence, more time at home online meant more time in the echo chamber of the internet on the pathway to radicalisation.

Given the recent spate of right-wing extremist incidents, and a spike in anti-Asian racism and Islamaphobia, this was not particularly surprising. As Burgess said,

The online environment is a force multiplier for extremism; fertile ground for sharing ideology and spreading propaganda.

Ideological extremists are now more reactive to world events, such as COVID, the Black Lives Matter movement and the recent American presidential election.

What was unexpected, however, on the second anniversary of the Christchurch terror attack, was a radical pivot in ASIO’s official terminology for terrorist threats.

Why are we making a change?

Put simply, it’s because the current labels are no longer fit for purpose; they no longer adequately describe the phenomena we’re seeing.

That “our language needs to evolve” makes sense. There are very clearly some threats that we need to do a much better job of recognising, such as “the violent misogynists who adhere to the involuntary celibate or ‘incel’ ideology”.

Read more: To shut down far-right extremism in Australia, we must confront the ecosystem of hate

And clearly many extremists are, as Burgess said, “motivated by a fear of societal collapse or a specific social or economic grievance or conspiracy”. But the argument that they “don’t fit on the left–right spectrum at all” is much less convincing. What he is describing very much does fit with what is well recognised as far-right extremism. Despite being eclectic and variegated, it nevertheless coheres around a central core of victimhood and conspiratorial fear of replacement by dangerous, unclean outsiders.

Some are concerned this shift in language reflects pressure from political conservatives who have been vocal in their rejection of the term “right-wing extremism”.

Read more: Two years on from the Christchurch terror attack, how much has really changed?

It is also possible Burgess wishes to shine a light on this and subject the issue to greater scrutiny.

Nevertheless, there is a clear and welcome case for taking greater care to avoid burdening the Muslim community with prejudicial language when so many are working so hard to counter extremism. As Burgess said,

Understandably, some Muslim groups — and others — see this term as damaging and misrepresentative of Islam, and consider that it stigmatises them by encouraging stereotyping and stoking division.

It also needs to be recognised that the shift in terminology that Burgess introduced relates to “umbrella terms – and there may be circumstances where we need to call out a specific threat that sits underneath them”.

This specific reference came on the same day that two brothers, just 19 and 20 years old, and a 16-year-old relative, were arrested in connection with an arson incident in bushland north of Melbourne in mid-February, and a violent assault in the Melbourne CBD weeks later.

Police had responded to these incidents as regular crimes but subsequently found evidence of links with IS and engaged the joint counter-terrorism task force. The brothers have since been charged with trying to plan a terrorist act.

It is important that the director-general and others in positions of power and influence continue to speak clearly about the threats they are dealing with every day.

We should welcome the statement that

At ASIO, we’re conscious that the names and labels we use are important.

Informing and educating the public, and building trust and fostering social cohesion, are vitally important aspects of their work.

To be effective, this needs to be done without fear or favour and with respect and sensitivity. Words have a significant effect on how we think about, and respond, to issues.

Read more: Journalists and security agencies don't need to be friends. But can they at least talk to each other?