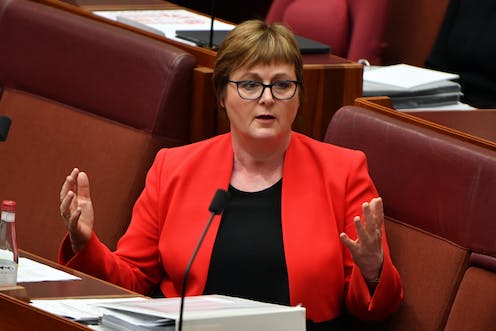 Defence Minister Linda Reynolds will miss a week of the Senate and a week of Senate estimates, after getting a medical certificate to extend her leave until April 2.

Reynolds was due back to work this Monday but the extra leave means she is not scheduled to face parliament (which resumes March 15) again until the May budget session.

The extended leave has fed speculation about her future.

Her office said in a statement she was reassessed by her cardiologist last Tuesday in relation to her pre-existing medical condition.

This condition led to her taking leave after she felt unwell when under parliamentary pressure over the Brittany Higgins issue. As a result of her medical problem, she pulled out of a National Press Club appearance.

Her statement said that last Wednesday she was “issued a medical certificate which extended her leave until April 2.

"Senator Reynolds is recuperating well and looks forward to resuming her duties as Defence Minister as soon as possible,” the statement says.

Last week Reynolds had to apologise after it was reported she had described Higgins as a “lying cow”. She made the remark within her office, and it referred to Higgins maintaining she had not been given enough support after she made her allegation of being raped in Reynolds’ office in 2019.

Labor frontbencher Kristina Keneally said Reynolds should resign. “ Is [Reynolds] trying to pretend that she is well enough on the one hand to continue as defence minister but not well enough on the other to front up and answer questions in Parliament in estimates? Her position is untenable.”

Labor’s defence spokesman Brendan O'Connor said: “While I fully support the minister taking health advice regarding her medical condition, her absence is not a reasonable excuse for the government to avoid answering valid and ongoing questions regarding hugely expensive defence contracts.

"We expect the acting Defence Minister Marise Payne must be accessible and cooperative with the Senate, especially during the upcoming Senate estimates session.

"There are serious questions that remain unanswered about a range of defence issues, including the mishandled $90 billion submarine program.”

Attorney-General Christian Porter, on leave to deal with the mental health stress from an allegation of historical rape, has no set date for returning to work.

The ABC’s Four Corners will air a program on the issue on Monday night.

Meanwhile the government is scrambling to try to deal with its industrial relations legislation in the Senate next week.

A spokesman for the acting Industrial Relations Minister Michaelia Cash said: “The government remains committed to passage of the bill at the earliest opportunity”.

The government was aiming to get the legislation through in the week.

But this now seems highly unlikely. Independent crossbencher Rex Patrick said Porter had been so engaged with the legislation that he did not think it possible for the acting minister to deal with the detail in time.

Centre Alliance’s Stirling Griff also thought the legislation would not be finalised in the week.

The government needs three of the five crossbenchers and negotiations involving various issues will be complicated.