The world was excited by the news last week that NASA’s Perseverance rover had successfully landed in a Martian crater. The rover will now set about collecting samples from what scientists say was an ancient lake fed by a river. The name of this exotic Martian crater is Jezero.

As a South Slavic linguist, I immediately recognised the word. In several former Yugoslav countries, including Bosnia and Herzegovina, Croatia, Montenegro, Serbia and Slovenia, “jezero” (pronounced “yeh-zeh-ro”, with the stress on the first syllable) means lake. Fair enough — but why a Balkan lake on Mars?

The task of providing names for places of interest on Mars falls to the International Astronomical Union (IAU). They apparently named the Martian crater Jezero in 2007, well before earthlings had paid any attention.

I later discovered the name was not, in fact, intended simply as a generic “lake”, but refers to a specific village called Jezero. With a population around 500, it is located in western Republika Srpska, the Serb-dominated part of Bosnia and Herzegovina. It is very near a river-fed lake called Veliko Plivsko Jezero, or Great Plivsko Lake.

First views of the Jezero crater from NASA’s Perseverance rover.

According to the Balkan Insight news service, the mayor of Jezero first learned of NASA’s plans in a letter from the US ambassador in Bosnia and Herzegovina, informing her the village and its name were to be honoured by the spacecraft landing in the Jezero crater. 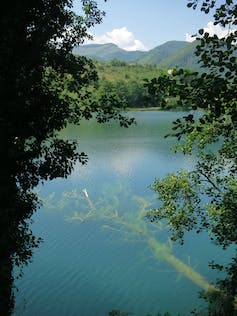 The villagers apparently first dismissed this as fake news. But, to their later amazement, people all over the world have now been learning to pronounce Jezero properly.

The landing was broadcast live at the village’s only school, with the Balkan Insight reporter describing the villagers as “star-struck” and justifiably proud of their connection to the mission.

There was also cautious optimism about the prosperity that might flow from tourists discovering their sleepy hamlet (at least after the pandemic). Famous on Mars, might Jezero be celebrated on Earth as well?

The alternative to be avoided, one hopes, is that a minor Balkan conflict breaks out over language and designated names. Every one of the former Yugoslav countries can claim the word “jezero” in their respective dictionaries. And any traveller to the Balkans knows the region is rich with lakes.

But only one village carries this generic word as its name. Was it politically advisable for one village in the Serb-dominated entity of Bosnia and Herzegovina to be singled out? For many, this part of the country is still associated with the nationalism and ethnic cleansing of the Bosnian war in the 1990s.

Read more: '7 minutes of terror': a look at the technology Perseverance will need to survive landing on Mars

How would the members of other communities in the country — Bosniaks (the country’s Muslim population) and Croats — respond? Could they support the Serbs of Jezero receiving such positive media coverage?

As my book about the break-up of the Serbo-Croatian language explored, language rifts in the Balkans are endemic and have long been both a symptom of ethnic animosity and a cause for inflaming it.

Will people quibble over whether the crater is named for the village or for its nearby lake, or any lake within the region? Or should all who say “jezero” feel proud the word is now in the global lexicon? 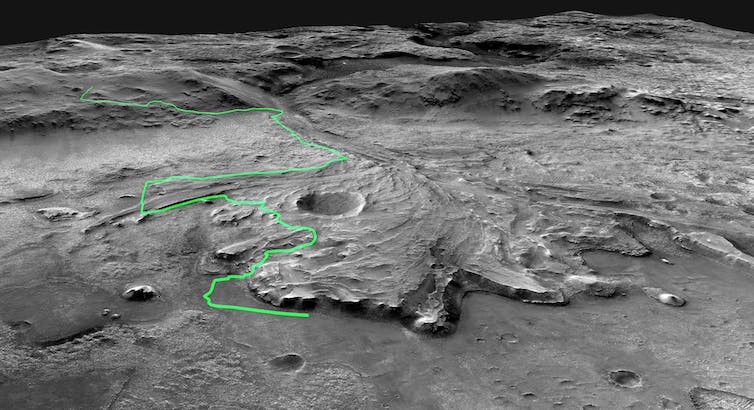 Jezero crater on Mars, showing a possible route the Perseverance rover could take as it investigates several ancient environments. Nasa

During the time of Tito’s rule in Yugoslavia, such matters would not have been as contentious, since many people believed the dominant common language of the country was Serbo-Croatian.

Ethno-nationalism was forbidden and people mostly got along. However, since the violent break-up of Yugoslavia, people in the newly independent states now speak separate languages: Bosnian, Croatian, Montenegrin and Serbian.

Over the years, speakers of the four languages have slowly drifted apart, but they all agree a lake is called “jezero”. Further complications arise with peoples and governments even further afield. The Slovenes and Czechs also say “jezero”, and the Macedonian and Bulgarian form is the almost identical “ezero”.

Any similarity between the landscape around Jezero in Bosnia and Herzegovina and the crater with the same name on Mars may end with the name. And I doubt the scientists at NASA or the IAU ever considered the potential implications of using a common word shared by so many nations to name an important site on Mars.

But, as we know, words have power. It would be a shame if a distant, silent crater on another planet caused envy and resentment here on Earth. So far, however, the political situation in the Balkans remains almost as calm as that on Mars, and that is cause for hope.