Review: Whale Fall, written by Ian Sinclair and directed by Melissa Cantwell for The Kabuki Drop. Commissioned by PICA and co-presented with Perth Festival.

Whale Fall follows the emotional journey of a 12-year-old boy, Caleb (Ashton Brady), and his family grappling with Caleb’s desire to medically affirm his gender: letting go of the daughter they had; accepting and getting to know the son he has become.

We are immersed in an ocean setting. Ian Sinclair’s script carries a strong marine undercurrent from beginning to end: the beachside house, the young boy’s dream of becoming a marine biologist, his excitement in recounting his readings about intriguing sea creatures to his mother, Nadine (Caitlin Beresford-Ord), and the parallel theme of whale fall sewn into the story. This is the new life borne out of a dead whale when it reaches the ocean floor.

The play is as much about a young trans person’s journey as it is about Australians’ strong connection to the ocean and ever-increasing awareness of our ecological responsibility for its preservation.

In death, and life

Sinclair drew inspiration for his play from Rebecca Grigg’s 2015 essay of the same name, which she later developed into the book Fathoms (2020).

Contrary to common belief, most whales’ bodies are slightly higher in density than seawater. Unless their lungs are filled with air, whales will quickly sink to the bottom of the ocean.

Once decomposition of a dead whale sets in, the carcass’ density decreases and gas is produced through putrefaction. In marine environments over 100 meters deep, hydrostatic pressure is sufficiently high to hold carcasses on the seafloor. 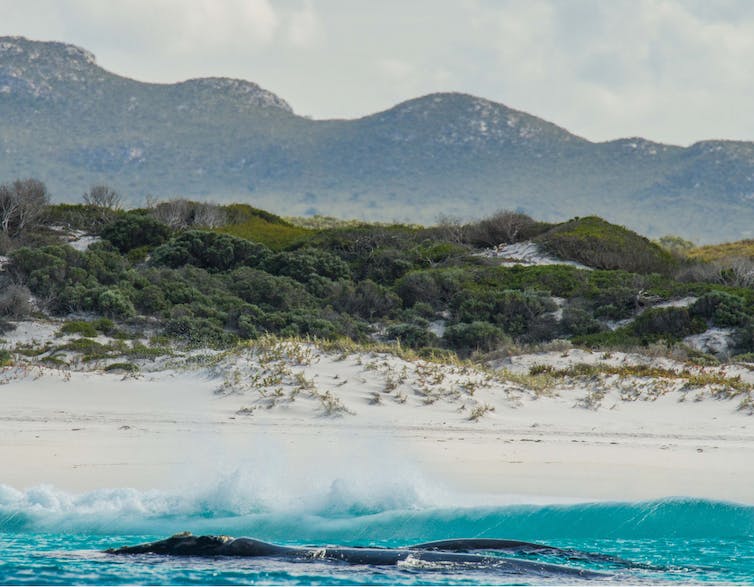 On the seabed, the carcass transitions to what is scientifically called a “whale fall ecosystem” – a unique habitat island inhabited by a biodiverse and highly specialised range of marine organisms subsisting on the dead carcass.

Since their discovery in the late 1980s, it has become clear that whale fall ecosystems are abundant in certain regions of the deep sea. They support extraordinarily rich communities of species, which can be supported by one whale fall for decades.

Caleb explores the whale’s journey as a way of both escaping the emotional toll of his situation, and finding his path forward.

He sees the whale — a mammal like himself — living and dying in deep-sea darkness, before emerging and giving life in a new form.

The boy’s account of the whale’s journey into the abyss and transforming into whale fall is a delightful mixture of poetry and accurate scientific detail, conjuring images of what it might be like to undergo such a change. 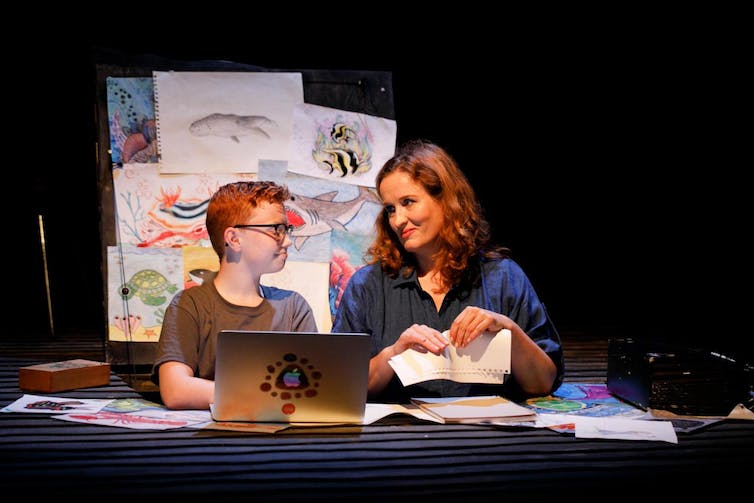 Ashton smoothly rolls the scientific poetry off his tongue to describe the “buoyancy of the meat” of the sinking whale, “weighed down by bones, with white worms clinging to a parachute of muscle, a macabre marionette”.

He then takes us into the complex ecosystem of isopods, polychaetes, crustaceans and deep-sea fish that eventually scavenge and inhabit the carcass: incredible new life in the abyssal depths of the sea.

The dynamic tempo (sound design and composition by Rebecca Riggs-Bennett) is sometimes playful, intensifying to a climax and then releasing, only to be followed by a new wave of dynamic emotion, leaving you caught up in the journey.

Whale Fall highlights our internal battles to adapt to life’s challenges, its humanity, and important social issues regarding gender identity — all while communicating a message about ecological responsibility for safeguarding the ocean.

Only by exploring these issues through powerful, emotionally engaging and thought-provoking artistic works such as this one can we create the cultural changes required for a healthy society.

Whale Fall is at PICA Performance Space until 27 February.