Talk about returning the economy to normal after the crisis is misguided. Before the crisis, normal was nowhere near good enough.

Australia did indeed manage to go 28 years without a commonly-defined recession. But the expansion had three distinct stages.

The first, from the end of the early 1990s recession to the early 2000s, saw dramatic economic growth fuelled by dramatic productivity growth. In fact, Australia led the developed world in productivity growth — a remarkable development given that it had spent most of the twentieth century at the bottom of the developed country league table. Much of it was driven by the Hawke government’s economic reforms in the 1980s.

I call this first decade of the long expansion the productivity boom.

Australia continued to experience rapid growth in incomes for another decade, until 2013, this time driven by extraordinarily high export prices for metals and energy and the resources industries investment booms that followed.

I call this second boom the China resources boom. It drew its strength from the world’s most populous country experiencing the strongest, longest and most resource-intensive economic growth of any developed country, ever.

During the China resources boom, as the world fell into the global financial crisis and bold fiscal and monetary stimulus in Australia and China made Australia one of only two developed countries to avoid recession.

Throughout these first two decades of the long boom, from 1992 to 2012, average Australian incomes, measured in international currency, rose from the bottom half of the developed country league table to the top-most tier. By 2013 Australian incomes were one-quarter higher than in the United States.

Then the dog days

Economic growth continued after 2013, but much more slowly, with stagnant output per person and decline in the typical household’s real wages and income. I call this third period the dog days. In the seven years from 2013 to 2019, while the whole developed world experienced slow and grumpy times, Australia drifted to the back of the slow-moving pack.

Unemployment has never again fallen to anywhere near the 4% it reached on the eve of the global financial crisis. Underemployment has grown and grown. Average household disposable income per person ended the seven lean years where it began — a period of income stagnation for ordinary Australians unprecedented since (and starting to challenge in longevity) the Great Depression.

By 2019, average Australian incomes, again measured in international currency, were one-quarter below those of the US.

Many Australians are accustomed to thinking of Japan as something of an economic basket case. They might be surprised to learn that from 2013 to 2019 Australia underperformed Japan on the most important indicator of economic performance: output per person. If Japan is a basket case, on this measure Australia has been a worse one since the dog days began.

We need to lift our ambition higher

Returning to those dog days is deeply unattractive, but it is what is almost certain to happen if the treasurer and Reserve Bank are as good as their words.

Josh Frydenberg has said he will maintain an expanded budget only until unemployment “is on a clear path back to pre-crisis levels”. He defines pre-crisis levels as “comfortably back under six per cent”.

That is nowhere near what Australia is capable of.

Our bank should buy our bonds

Oddly, to not run the budget as hard as we can until we are at full employment could condemn us to endless increases in our public debt to GDP ratio because we wouldn’t be producing the GDP we were capable of. And it could damage our commitment to a liberal democratic political system.

The extra bonds needed to finance ramped up Commonwealth and state government spending should be bought by the Reserve Bank through expanding its balance sheet (creating money) rather than bought on the private market where they are likely to unhelpfully push up the value of the Australian dollar.

It should not be afraid to push rates negative

The Reserve Bank’s holdings of Australian government bonds are low by international standards, and they should be expanded. We should avoid running higher interest rates than other developed countries unless our economy is clearly stronger — even if that means negative short term interest rates.

Much contemporary economics presumes that negative or near-interest rates are impossible, or short-lived if they ever appear. The Reserve Bank treats them as anathema, to be avoided at all costs.

Read more: The Reserve Bank might yet go negative

That view has been challenged by the twenty-first-century reality of very high savings and low investment on a global scale. There is no reason to expect a return to “normal” higher interest rates soon, or, with certainty, ever. 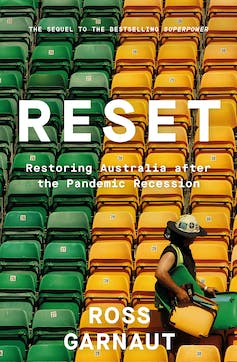 Reset, by Ross Garnaut, to be released Monday.

Some (most likely new) businesses will do well in an ultra-low interest rates environment. Other more-established businesses will cling to guarantees of old rates of return and withhold investment, eventually being weeded out by Darwinian processes.

In my new book Reset: Restoring Australia after the Pandemic Recession, to be released on Monday I outline plans for a new business tax system that would reward businesses that invested and penalise those that lived off “economic rents” — over-high profits maintained by lobbying and barriers to competition.

Australians with established wealth have done extraordinarily well out of the low interest rates, rising asset values and high profit shares in the twenty-first century.

We are kidding ourselves if we think an extreme and growing divergence of fortune with less well off Australians is consistent with social cohesion and effective democratic government as we deal with intractable domestic and international problems.

And we should pay near-everyone a basic income

In my book I propose a form of basic income, I call it Australian Income Security, that would help stimulate the economy until full employment was achieved. My calculations suggest it is economically realistic.

Nearly all resident adult Australians would receive an unconditional fortnightly payment at the JobSeeker rate (about $15,000 per annum), indexed to the consumer price index. Extra would be paid to people who currently qualify for payments in excess of JobSeeker. The payment would attract no tax.

Read more: 'Whatever it takes' should now include a universal basic income

Receipt of the basic payment would not depend on passing a bureaucratic test of whether the recipient had put sufficient effort into the search for a job.

Recipients could choose to look for a job in the knowledge they would keep 63% of every dollar of income from employment.

It would create a much stronger incentive to find work than the high effective marginal tax imposed by the present system as benefits are withdrawn.

Non-Australians and Australians who had not been resident for at least half a year would be excluded, as would people with taxable income above $250,000 or with net assets including super and a house of $2 million.

We will make earlier and stronger progress towards full employment and boosting living standards if we restrict our immigration program and refocus it on valuable skills.

Here I am not referring to the humanitarian component of our immigration program which is too small to be of much economic significance.

Read more: With our borders shut, this is the ideal time to overhaul our asylum seeker policies

Immigration increases both the number of people available to work and the demand for workers. Nevertheless, economic prudence argues for holding net immigration in the decade ahead to about the level in the first stage of Australia’s three-stage recession-free expansion – the productivity boom phase.

Immigration was then about 0.5% of the population per year, half what it was in the dog days that preceded the COVID recession.

Our reset should do much better than return us to the economy we left, but there’s no need to turn our backs on the best of our past. We have faced difficult challenges before and shown we are more than capable of meeting them, often by doing more than we have done before. This is one of those times.