There aren’t many parts of the world where you can discover a completely new assemblage of living creatures. But after sampling underground water in a remote, arid region of northern Australia, we discovered at least 11, and probably more, new species of stygofauna.

Stygofauna are invertebrates that have evolved exclusively in underground water. A life in complete darkness means these animals are often blind, beautifully translucent and often extremely localised – rarely living anywhere else but the patch they’re found in.

The species we discovered live in a region earmarked for fracking by the Northern Territory and federal government. As with any mining activity, it’s important future gas extraction doesn’t harm groundwater habitats or the water that sustains them.

Our findings, published today, show the importance of conducting comprehensive environmental assessments before extraction projects begin. These assessments are especially critical in Australia’s north, where many plants and animals living in surface and groundwater have not yet been documented.

When the going gets tough, go underground

Stygofauna were first discovered in Western Australia in 1991. Since then, these underground, aquatic organisms have been recorded across the continent. Today, more than 400 Australian species have been formally recognised by scientists. 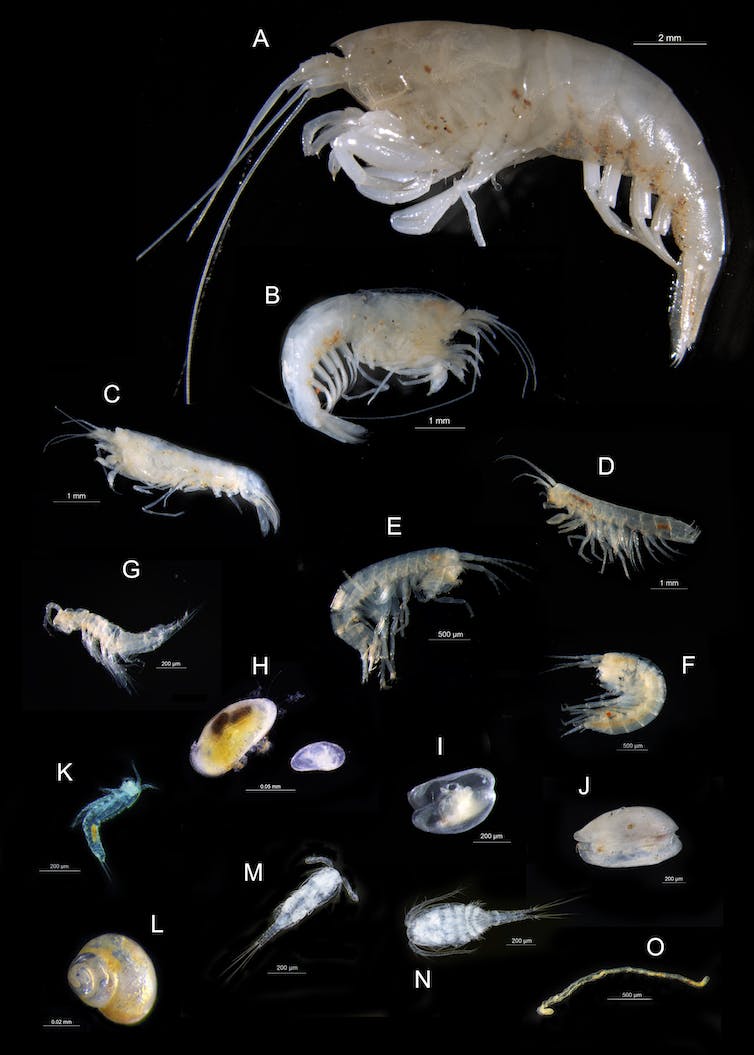 The subterranean fauna we collected from NT aquifers, including a range of species unknown to science. A–C: Atyid shrimps, including Parisia unguis; D-F: Amphipods in Melitidae family; G: The syncarid species Brevisomabathynella sp.; H-J: members of the Candonidae family of ostracods; K: the harpacticoid species Nitokra lacustris; L: a new species of snail in the Caenogastropoda: M-N: Members of the Cyclopidae family of copepods; O: The worm species Aeolosoma sp. GISERA, Author provided

Stygofauna are the ultimate climate change refugees. They would have inhabited surface water when inland Australia was much wetter. But as the continent started drying around 14 million years ago, they moved underground to the relatively stable environmental conditions of subterranean aquifers.

Read more: Hidden depths: why groundwater is our most important water source

Today, stygofauna help maintain the integrity of groundwater food webs. They mostly graze on fungal and microbial films created by organic material leaching from the surface.

In 2018, the final report of an independent inquiry called for a critical knowledge gap regarding groundwater to be filled, to ensure fracking could be done safely in the Northern Territory. We wanted to determine where stygofauna and microbial assemblages occurred, and in what numbers.

The stygofauna we found range in size from centimetres to millimetres and include: 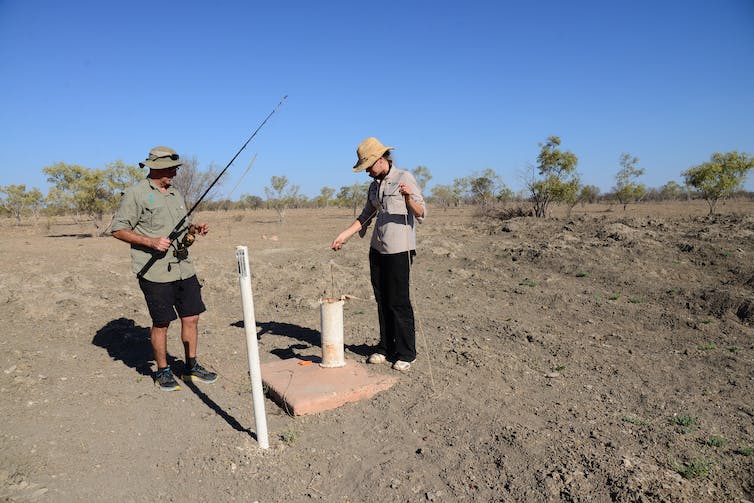 A thriving stygofauna ecosystem lies beneath the surface of northern Australia’s arid outback. We sampled water through bores to measure their presence. Jenny Davis, Author provided

These species were living in groundwater 400 to 900 kilometres south of Darwin. We found them mostly in limestone karst habitats, which contain many channels and underground caverns.

Perhaps most exciting, we also found a relatively large, colourless, blind shrimp (Parisia unguis) previously known only from the Cutta Cutta caves near Katherine. This shrimp is an “apex” predator, feeding on other stygofauna — a rare find for these kinds of ecosystems. 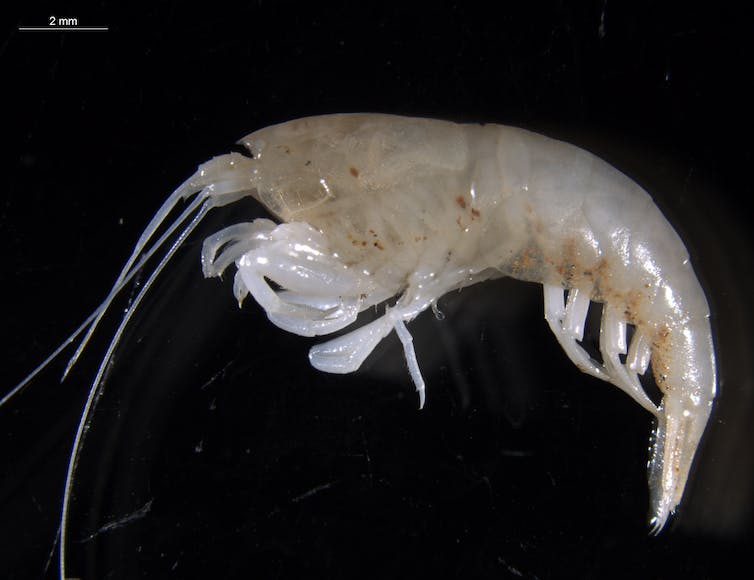 Protecting groundwater and the animals that live there

The Beetaloo Sub-basin in located beneath a major freshwater resource, the Cambrian Limestone Aquifer. It supplies water for domestic use, cattle stations and horticulture.

Surface water in this dry region is scarce, and it’s important natural gas development does not harm groundwater.

The discovery of these new NT species has implications for all extractive industries affecting groundwater. It shows the importance of thorough assessment and monitoring before work begins, to ensure damage to groundwater and associated ecosystems is detected and mitigated. 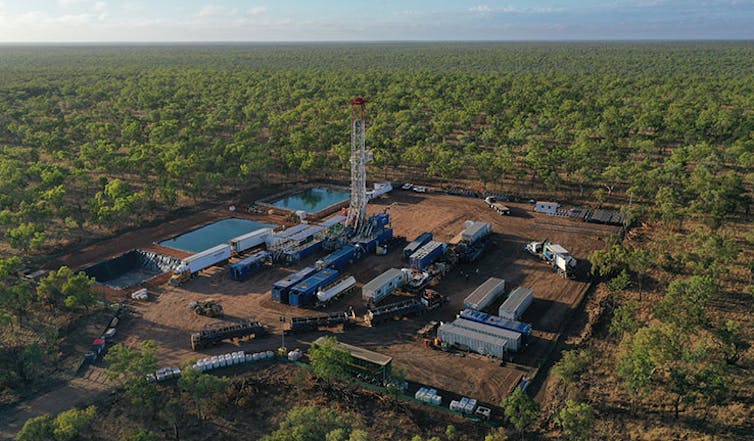 The Beetaloo Basin is part of the federal government’s gas expansion strategy. Department of Industry, Science, Energy and Resources

Groundwater is vital to inland Australia. Underground ecosystems must be protected – and not considered “out of sight, out of mind”.

Our study provides the direction to reduce risks to stygofauna, ensuring their ecosystems and groundwater quality is maintained.

Comprehensive environmental surveys are needed to properly document the distribution of these underground assemblages. The new stygofauna we found must also be formally recognised as a new species in science, and their DNA sequence established to support monitoring programs. 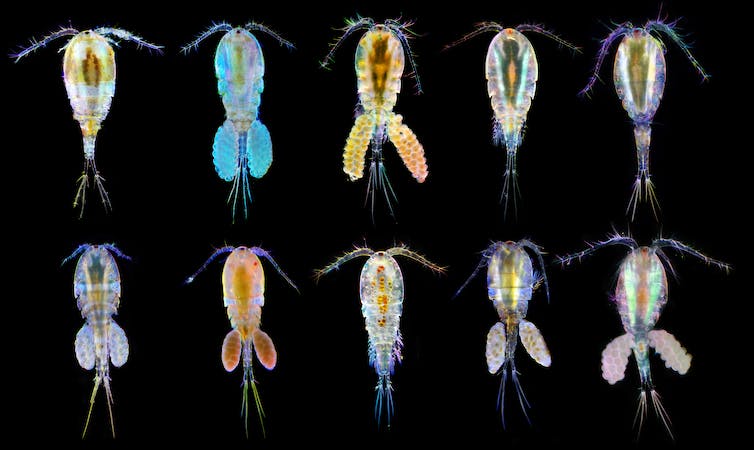 Many new tools and approaches are available to support environmental assessment, monitoring and management of resource extraction projects. These include remote sensing and molecular analyses.

Deploying the necessary tools and methods will help ensure development in northern Australia is sustainable. It will also inform efforts to protect groundwater habitats and stygofauna across the continent.