Ask anyone the identity of the world’s most famed turtles, and the answer is likely to be those legendary heroes in a half-shell, the Teenage Mutant Ninjas. Since first appearing in comic book form in 1984, the pizza-eating, nunchuk-wielding characters have shown the world the tougher side of turtles.

Part of the appeal of the Teenage Mutant Ninja Turtles is that, as animals, they seem to be playing against type. Turtles in the modern day are usually considered placid animals, an image exemplified by the easygoing surfer-turtle, Crush, in Finding Nemo.

To humans, the dawdling turtle is generally perceived as non-threatening. (An important exception here is made for the turtle with an accomplice. The Greek poet Aeschylus is said to have been killed by a tortoise dropped from the sky by an eagle). Indeed, the turtle’s “gentle” image may partially explain the animal’s enduring popularity with children.

Yet, as Aesop may have warned, there is more to the turtle than meets the eye, as a hungry tiger shark recently discovered when its turtle prey fought back with “aggressive, biting lunges”.

Rather than being a recent anomaly, the image of the turtle warrior is common to many ancient and modern cultures. Indeed, the first known depiction of a turtle warrior is found in ancient Mesopotamia (modern day Iraq), in some of the world’s oldest known literature.

Dexterous flippers and shells as shields

The fictional ninja turtle draws on the creature’s many remarkable biological features. The sea turtle’s flippers are useful for propelling the animal through water, but recent research has revealed the surprising dexterity of its limbs.

Turtles can use their flippers for a variety of tasks, such as rolling a scallop across the sea floor, tossing their prey into the air to stun it, or even striking the prey in a chopping action. The discovery of the turtle’s ability to “karate chop” prey made international headlines, likely due to comparisons with their comic book avatars.

There are 360 known species of turtle, including seven species of sea turtle. Turtles have survived and thrived for many millions of years, colonising every continent except Antarctica, and inhabiting every ocean but the Arctic and Antarctic.

The astonishing physical endurance of some turtle species has seen them setting records for marathon swimming, deep diving, and longevity.

The turtle’s distinctive shell provides a kind of natural body-armour. As well as shielding the animals from predators, shells also provide protection from the natural elements. Shells are a living part of the turtle, and can offer a handy store of minerals such as calcium. For some tortoises, the defensive use of the shell is accompanied by an offensive one, used for battling rivals. 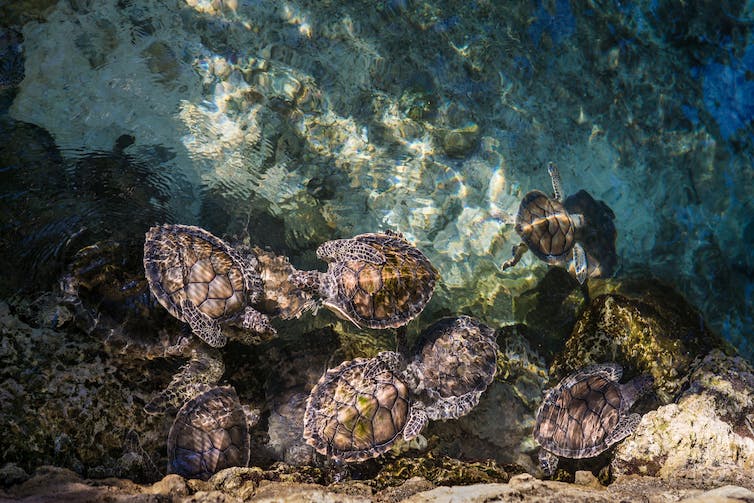 Shells are a living part of the turtle. Ricardo Braham/Unsplash

This combination of defensive and more aggressive elements in the turtle’s physiology has likely inspired the animal’s reception in human culture from the earliest time of civilisation.

The little-known Sumerian myth of Ninurta and the Turtle sees a warrior turtle fight against a legendary hero for the fate of the world. This Mesopotamian myth dates to early in the second millennium BCE.

Read more: In ancient Mesopotamia, sex among the gods shook heaven and earth

The eponymous turtle in the narrative is created by the god of wisdom and fresh water, Enki, to retrieve a stolen tablet from the hero, Ninurta, and to teach him humility. The tablet holds special powers that control the path of fate for whomever holds it. 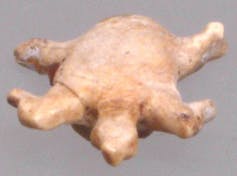 A turtle amulet from Egypt made of ivory or bone, c. 2150–1950 BCE. The Metropolitan Museum of Art

In the ancient story, Ninurta is sent to recover the tablet from a mythical beast, the Anzud Bird (sometimes called the “Thunderbird”). Ninurta is successful and the grateful deities tell him to name his reward. Ninurta feels the best reward is to simply hang on to the tablet and gain control over the whole world – in the style of an ancient super-villian.

So Enki builds an attack turtle from clay, which bites at Ninurta’s ankles. While he temporarily withstands the chomping chelid, the turtle then digs a deep “evil pit”, into which Ninurta falls. The magic tablet is retrieved, the world is saved, and the turtle continues its furious attack, tearing at Ninurta with its claws.

In ancient Egypt, the turtle’s ability to submerge itself beneath the water saw it given the name “the mysterious one”. Turtles were viewed as powerful animals; their images were used for warding off evil.

Images of turtles were a common feature on the wooden and bronze rods used by Egyptian magicians. Often referred to in the modern day as “magic wands”, these rods were held in the left hand of a priest or a magician as they performed magic rites.

This Egyptian rod, c. 1878–1640 BC, is composed of four joining segments, with a turtle taking centre place. The Metropolitan Museum of Art

Images of powerful animals, such as baboons, crocodiles, and lions, and protective symbols such as the Eye of Horus, decorated the sides of the magic wand, while the figure of the turtle was attached to the top end of the rod.

The legendary Greek hero, Theseus, encounters a dangerous turtle on his mythical travels. Theseus is best known for entering the King of Minos’ labyrinth and slaying the monstrous Minotaur. When not wandering through island mazes, Theseus had many adventures involving other local rulers, including the bandit, Sciron.

Sciron lived high on the cliffs. When travellers passed by, he would make them kneel before him and wash his feet. Once they had crouched into a vulnerable posture, Sciron would kick the travellers into the sea, where they would be eaten by a monstrous turtle.

Theseus managed to defeat Sciron, casting him into the same sea patrolled by the giant turtle. This battle is preserved in ancient Greek art, with many works portraying the unhappy bandit’s fall from the cliffs, and the hungry turtle lurking below. 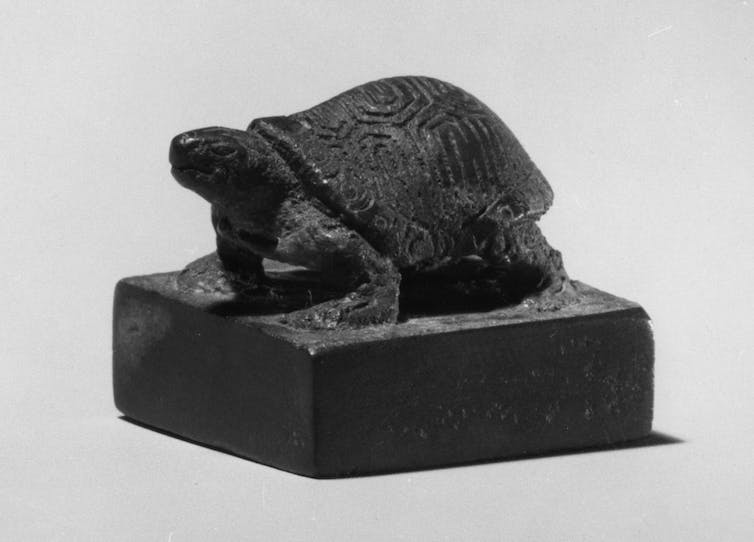 In ancient China, depictions of the Taoist deity Zhenwu, whose name means “Perfected Warrior”, show the warrior with a tortoise and a snake. Zhenwu is found from the 3rd century BCE, he is considered capable of powerful magic.

Read more: The science of magic: it's not all hocus pocus

The hidden quality of the turtle, tucked up in its shell, creates a mysterious image that makes a good fit for the “ninja” aspect of the cartoon heroes Donatello, Leonardo, Raphael, and Michelangelo. “Turtle power” is a key element of the team’s success, but their influence reaches beyond the purchase of comic books and action figures.

The popularity of the Teenage Mutant Ninja Turtles has drawn greater interest to the study and conservation of turtles and influenced herpetology. For some turtle specialists, the path to a career in the field began by following the adventures of the ninja turtle squad as children.

The Teenage Mutant Ninja Turtles (henceforth TMNT) first appeared in a comic created by Kevin Eastman and Peter Laird. It shows the four combatants fighting against their arch nemesis, the evil Shredder, and his army, the Foot (an homage to fellow superhero Daredevil’s enemy, The Hand). In the present day, the TMNT have appeared in countless incarnations, from movies to pizza cutters.

As well as influencing artists and storytellers, the physical qualities of turtles have provided inspiration for human combatants. In Mesoamerica, the Spanish conquistador Bernal Díaz del Castillo reported sailing along the coast of the New World in 1518 and seeing warriors holding shields made of carefully polished turtle shells.

The turtle’s physical form is referenced in the Roman battle formation, the testudo (“tortoise”), which involved aligning the soldiers’ shields to create a protective barrier.

The turtle’s shape and protective shell has also seen it used as a muse by designers of military crafts. The world’s first armoured boat, the Korean Geobukseon, was called the “Turtle Ship”. Built around 1540 CE, the ship featured cannons fired through the mouth of a dragon carved into bow, and a turtle’s tail, armed with gunports, attached to the stern of the craft. 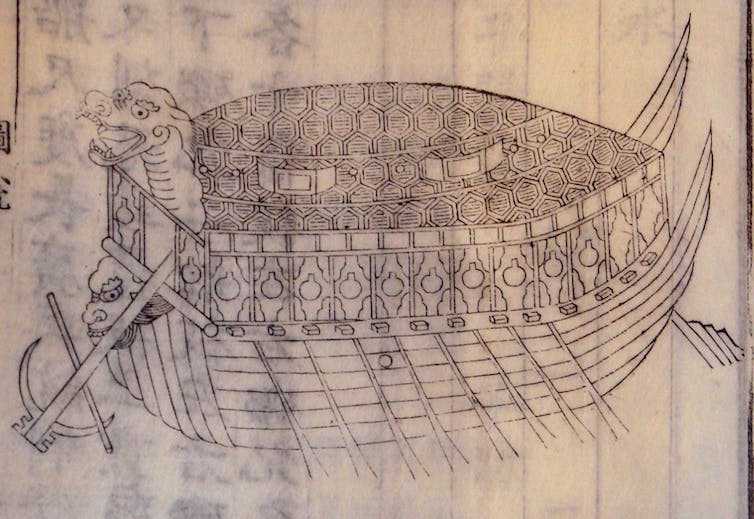 Turtles and the world’s first submarine

Another pioneering sea vessel inspired by the turtle is the world’s first submarine. The first known submersible craft with documented use in combat is the American Turtle. This vessel was created by David Bushnell in 1775, for use in the American Revolutionary War.

On September 6 1776, American Turtle was deployed to covertly draw close to the British Navy anchored in New York Harbour, to affix mines to the fleet’s flagship. After several attempts, the mission was aborted, and the Turtle floated away downstream. 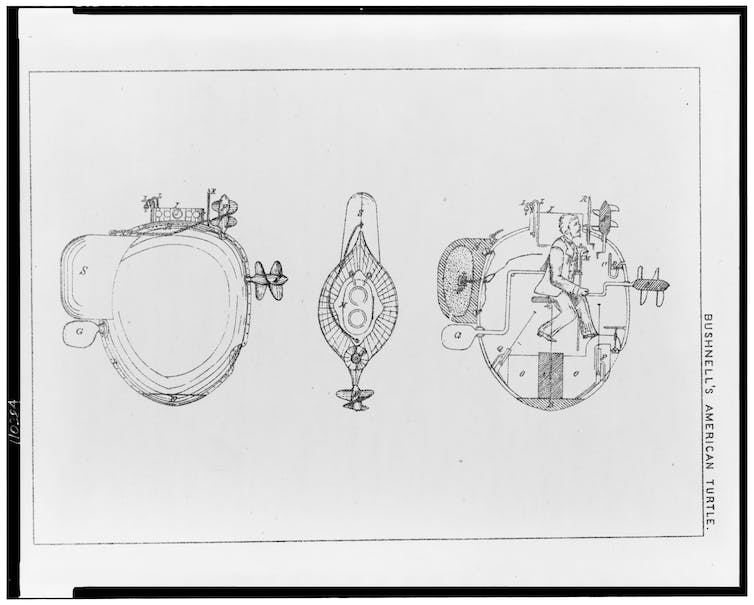 The American Turtle was a a one-man submarine, designed to attach bombs to British warships during the American revolutionary war. Library of Congress

The Turtle’s maiden combat mission was also her last, but the craft left a lasting impression on maritime history and the war’s participants. In a letter to Thomas Jefferson dated to 26 September 1785 — shortly before becoming the first president of the United States — George Washington described the turtle-like submarine as “an effort of genius”.

Turtles and submarines were successfully paired in Australian naval history. In 1996, the Defence Science and Technology Organisation developed an underwater, remote-controlled vehicle “Wayamba”. The vehicle’s name comes from the First Nations name for “sea turtle”.

Flippered gardeners of the sea

Given the turtle’s long-lasting cultural symbolism, it is perhaps not surprising to see the creature’s modern-day identification as a kind of ecowarrior among animals. The turtle’s charisma has been harnessed in campaigns to draw public awareness to important conservation issues, such as the impact of plastic and noise pollution in the ocean. 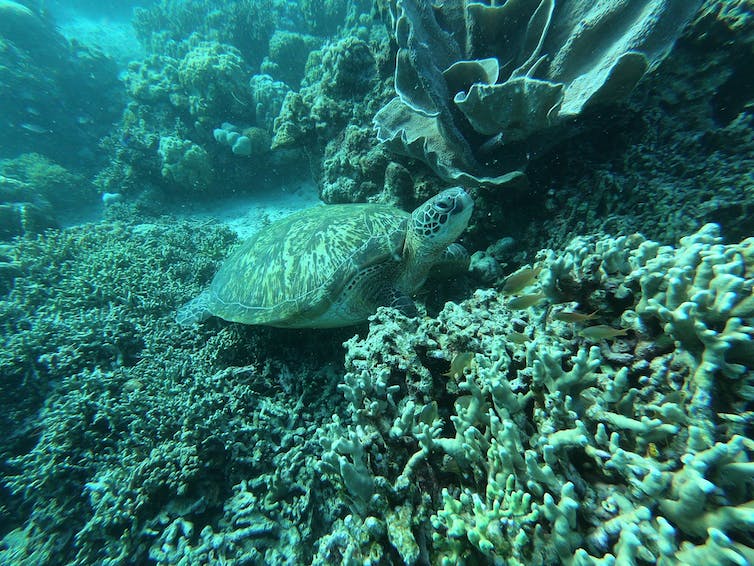 For over a hundred million years, turtles have played a crucial part in maintaining healthy marine ecosystems, through transporting nutrients from oceans to beach systems. Research has shown that by grazing on sea-grass and sponges, turtles maintain healthy reefs — like flippered gardeners of the sea.

Turtles have much at stake in the current climate crisis: they are among the most threatened groups of animals in the world.

Read more: Environmental destruction is a war crime, but it's almost impossible to fall foul of the laws

A landmark 2018 study showed turtles were more threatened than birds, fish, mammals, and even the much besieged amphibians.

The turtle is a fascinating animal whose famous lethargy belies an efficient and enduring creature, admirably adapted to its environment.

By building greater awareness of the cultural and environmental significance of turtles from prehistory to popular culture, we may help these remarkable animals to move (very slowly) towards a more secure and sustainable future.