Scott Morrison on Monday will announce $1.9 billion initial investment in the massive vaccine rollout which is due to start late February.

This comes as new economic disruption looms from the Western Australian government’s shock five-day lockdown of Perth and some other areas from Sunday night. The drastic measure has been triggered by a hotel security guard testing positive.

MPs and staffers on a flight from Perth to Canberra late Sunday were told to go to their accommodation – and not to Parliament House – and await further advice from ACT health officials.

It includes $200 million for pharmacies announced on Sunday. and brings to $6.3 billion the federal government’s total support for COVID vaccines and treatments.

In a Monday address to the National Press Club Morrison will say Australia enters 2021 in “a relatively strong position” in the fight against COVID.

But in the speech, an extract of which were released ahead of delivery, he stresses the vaccine rollout will not allow a let up “in the three vital suppression measures”: border restrictions and quarantine; testing and tracing, and distancing and hygiene. 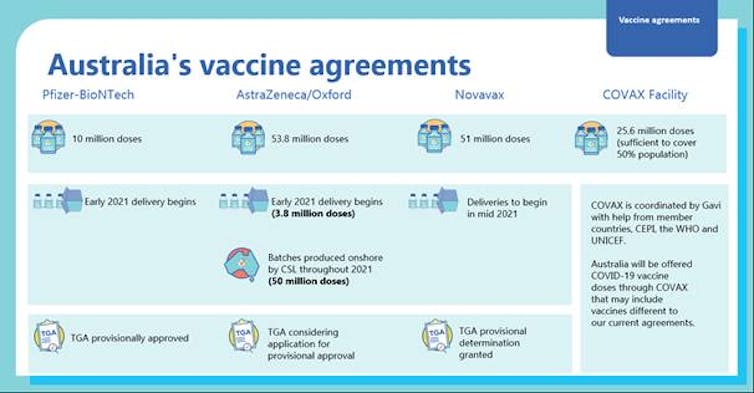 PMO With parliament resuming on Tuesday, Sunday night’s Newspoll showed a tightening, with government and opposition now 50-50. In the last Newspoll of 2020 the Coalition led Labor 51-49%. Both Morrison and Anthony Albanese lost support in their approval ratings and the “better PM” gap narrowed, although Morrison leads 57-29%. The poll will be a relief to the opposition leader, whose leadership has been under pressure. Morrison will reiterate in his address that the government aims to offer all Australians the vaccine – which is not compulsory – by October. “This will be one of the largest logistics exercises ever seen in Australia’s history — we will be vaccinating 26 million people, having secured over 140 million doses, enough to cover the Australian population several times over,” he says in his speech notes. “Our guidance is that first vaccinations remain on track to be in Australia, ready for distribution to priority groups, from late February. "However the final commencement date will depend on developments overseas, which we will continue to monitor and update accordingly.” The priority groups include health workers and people in aged care. Guidance on the vaccine will soon be provided for employees, employers, customers and industries. There will be “thousands of points of presence across Australia - hospitals, GPs, pharmacies, respiratory clinics, Aboriginal Health Services and a specialist surge workforce. This will ensure we get the vaccine to all Australians, including people in rural, remote and very remote areas and others who are hard to reach,” Morrison says. Australia’s 5,800 community pharmacies will be invited to participate in the rollout. Morrison will stress the need for vigilance, but also for proportionality, in 2021. “The pandemic is still raging. It is not petering out. The virus has not gone anywhere. Indeed, it is morphing into new and more virulent strains. "We have all learned a lot over the past twelve months and in so many areas led the way. "We must take these lessons into 2021 and continue to make our own way through this crisis. Our Australian way. "That respects our liberal democratic values, our expert institutions, our business led market economy and the responsibilities and accountabilities of our federal system. "Where our decisions to protect public health are guided by our respect for science and expert medical advice. "An economic response driven by clear principles to navigate uncertainty. "A response that is proportionate, timely, scalable and targeted.” The government continues to insist that its JobKeeper scheme will end in late March. But it is open to providing specific help where that is needed. “We are not running a blank cheque budget,” Morrison says. “You can’t run the Australian economy on taxpayers’ money forever.” 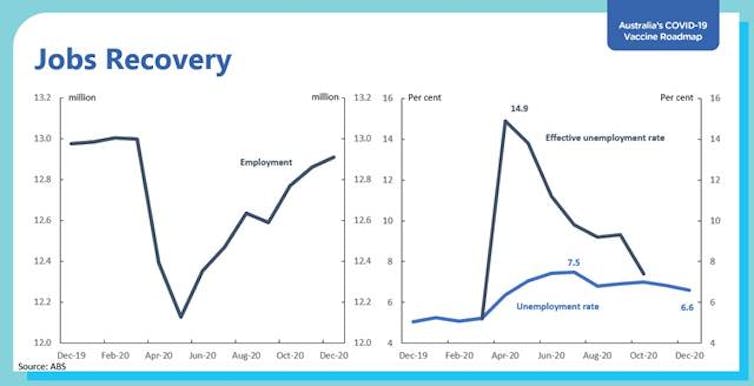 PMO “Australians are now voting with their feet to join the economic recovery,” he says. “The unemployment rate has fallen from 7.5% in July last year to 6.6% in December. "The effective rate of unemployment, that takes into account hours reduced to zero and people leaving the workforce, has also fallen to now be in line with the headline rate after hitting almost 15% at the height of the crisis. "Almost 800,000 jobs were created in the past seven months and it is very pleasing to see women take up the majority of those jobs. 90% of the jobs lost to COVID-19 had returned by the year’s end.” Morrison will stress that the $251 billion in direct economic support, “while largely delivered in 2020, has a long tail in providing ongoing support. "Treasury analysis has shown that our direct economic support measures are expected to result in economic activity being 5% higher in 2020-21 and 4.5% higher in 2021-22 compared to if no support was provided. "There is now a large sum of money available to be spent across the economy helping to create jobs and maintain the momentum of our economic recovery and that is where it needs to be right now - in Australians’ pockets. "Indeed in 2021, the government will continue putting more money back into Australian’s pockets to support their families and businesses.”