On January 31, 1961, an intrepid chimpanzee called Ham was launched on a rocket from Cape Canaveral in the United States, and returned to Earth alive. In this process, he became the first hominin in space.

In the 1950s, it was unclear whether humans could survive outside Earth – both physically and mentally. The science fiction writer and warfare expert Cordwainer Smith wrote about the psychological pain of being in space.

Plants, insects and animals had been taken to high altitudes in balloons and rockets since the 18th century. The Soviet Union sent the dog Laika into orbit on Sputnik 2 in 1957. She died, but from overheating rather than the effects of space travel itself.

While the USSR focused on dogs, the US turned to chimpanzees as they were the most like humans. The stakes became higher when US President John F. Kennedy promised to land humans on the Moon by the end of the 1960s.

Biography of a non-human astronaut

Ham was born in 1957 in a rainforest in the Central African nation of Cameroon, then a French territory. He was captured and taken to an astronaut school for chimps at Holloman Air Force Base in New Mexico.

The astrochimps were trained to pull levers, with a banana pellet as a reward and an electric shock to the feet for failure. The chosen chimp would test life support systems and demonstrate that equipment could be operated during spaceflight. Ham showed great aptitude, and was selected the day before the flight.

On January 31, 1961, Ham was launched into space, strapped into a capsule inside the nosecone of a Mercury-Redstone rocket. The rocket travelled at 9,000km/h, and reached an altitude of 251km. The whole flight took 16 minutes from launch to return. 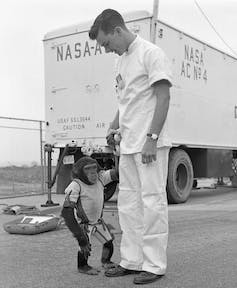 Ham with one of his handlers on the day of the spaceflight. NASA

Throughout the journey Ham was obliged to pull a lever. He received two shocks for not doing this correctly, out of 50 pulls. He achieved this with a 16cm rectal thermometer in place to monitor his temperature.

Jane Goodall, an expert in primate behaviour, said she had never seen such terror in a chimp’s expression. However, Ham was calm when weightless.

Ham survived the flight itself, but nearly drowned when the capsule started filling with water after its ocean splashdown. Fortunately, the helicopter recovery team reached him in time. Ham’s treat on emerging from the spacecraft was an apple, which he devoured eagerly. 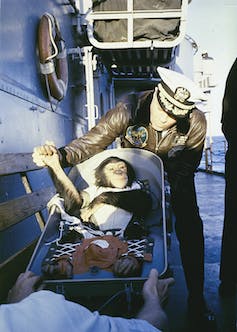 Ham clasps the hand of a member of the recovery team after exit from the capsule. NASA

After his flight, Ham lived for 20 years by himself, in a zoo in Washington DC. People wrote him letters, and some were answered by zoo staff signed with Ham’s fingerprint. In 1980 he was sent to another zoo to live with a group of chimps. He died in 1983 at the age of 26.

A proposal to stuff and display his body was abandoned after an outcry. But he did undergo a postmortem. Ham’s flesh was stripped from his skeleton, cremated, and buried at the Space Hall of Fame in Almogordo, New Mexico. The National Museum of Health and Medicine in Washington DC retains his bones.

Cyborg and simian, man and machine

Ham sits at an interesting intersection of race, gender and species. “Ham” was an acronym for Holloman Aero Medical, but as American philosopher of science Donna Haraway has pointed out, “Ham’s name inevitably recalls Noah’s youngest and only black son”.

While the chimps were in training at the Holloman Airforce Base, women were actively excluded from spaceflight. Pilot Jerrie Cobb said she would take the place of one of the chimps if it meant having a shot at space.

Read more: Almost 90% of astronauts have been men. But the future of space may be female

The astronauts of the 1960s Mercury program felt their masculinity threatened by performing the same tasks as chimps. In a scene from the 1983 film The Right Stuff, based on Tom Wolfe’s book for which he did extensive interviews with the astronauts, one says:

Well none of us wants to think that they’re going to send a monkey up to do a man’s work … what they’re trying to do to us is send a man up to do a monkey’s work.

In the I Dream of Jeannie episode “Fly me to the Moon” (1967), astronauts Tony Nelson and Roger Healey train Sam the chimp for spaceflight.

They are envious that Sam gets to go to the Moon before them. “He can’t make any decisions, we might as well have a robot up there,” says Major Nelson.

This refers to an ongoing battle among both Soviet and US astronauts about how much autonomy they would have as pilots. On both sides of the Iron Curtain, being controlled by machines was felt to diminish masculinity.

Chimps in space also threatened the accepted evolutionary order. In some versions of the famous “March of Progress” illustration of human evolution, the first figure is a knuckle-walking ape and the last is an astronaut. Ham was leapfrogging to the front of the evolutionary queue in a Planet of the Apes-style interspecies competition.

Ham’s spaceflight made him more than animal, but still less than human.

A mere 10 weeks after Ham’s feat, Soviet cosmonaut Yuri Gagarin became the first human in space when he orbited Earth on April 12. On November 26, Enos the chimp completed an orbit.

We don’t send animals into orbit any more as proxies for human experience. But there is one chimp still in space. The calls of a wild chimp were recorded on the Voyager Golden Records, now heading out beyond the Solar system.