This story contains spoilers for Ammonite

Palaeontologist Mary Anning is known for discovering a multitude of Jurassic fossils from Lyme Regis on England’s Dorset Coast from the age of ten in 1809.

Her discoveries included the first complete Icthyosaurus (although it was her little brother who first stumbled across the skull, Anning spent the next year excavating and preparing the rest of the fossil), the first complete Plesiosaurus and subsequent plesiosaur species, a perfectly preserved belemnite complete with anterior sheath and inkbag, and the first pterodactyl Dimorphodon. 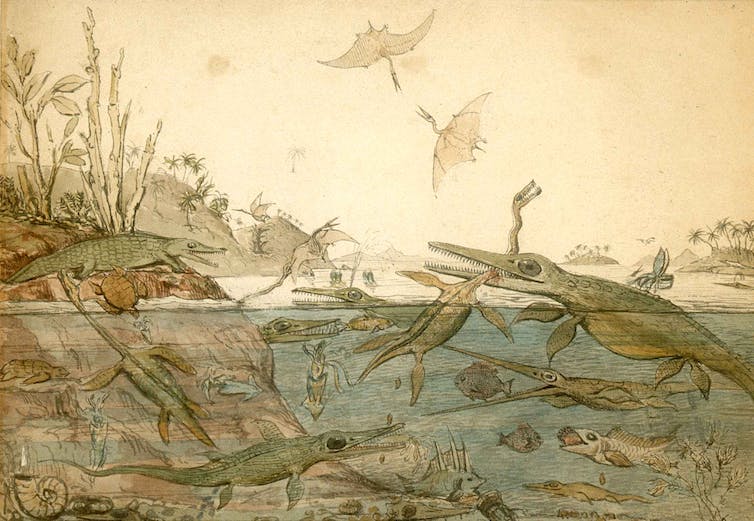 Her fossil finds were sought out by the “rockstar” palaeontologists of the day such as William Buckland and Richard Owen as they debated the age of the Earth, theories of extinction and, later, of evolution.

Although she died in 1847 at the age of 47, her impact on our understanding of the diversity of marine life in the Jurassic seas has left an indelible legacy.

The new film Ammonite — named for the whorl-shelled cephalopod fossil commonly found in Lyme Regis and sold as a “curios” in Anning’s time — is a fictionalised sensual love story between Anning (Kate Winslet) and her friend and fossicking partner Charlotte Murchison (Saoirse Ronan).

Since news of this film broke, there has been much discussion as to Mary Anning’s true sexual orientation. Depicted as a lesbian, the film’s writer and director, Francis Lee, has defended this choice by stating Ammonite is not a biopic.

While it is true Anning never married, and may have had a passionate love affair as shown in the film, I was curious as to how scientifically and historically accurate other details in the film were.

Ammonite begins in the 1840s, with Anning fossicking along the Lyme Regis coast, living in poverty with her mother (to whom she barely speaks) at the back of their family shop, Anning’s Fossils and Curios.

In reality, Anning sold fossils from a shop called Anning’s Fossil Depot she purchased at the age of 27. Prior to that, she sold fossils alongside her brother Joseph and mother Molly outside their family home. 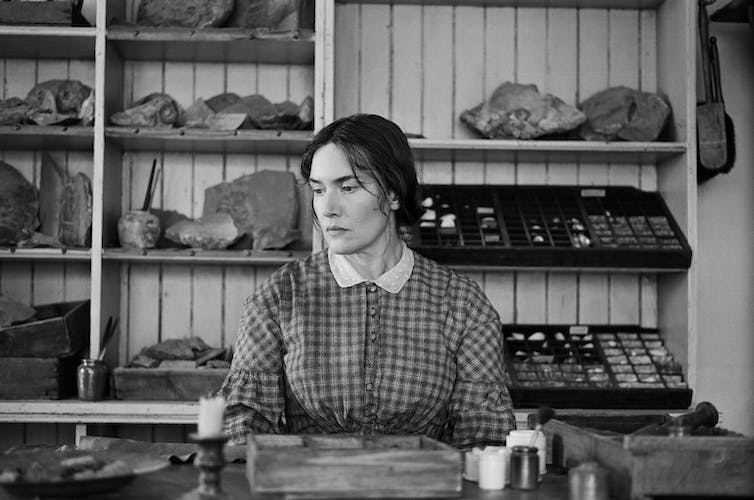 Both the real and the fictional Anning sold fossils to an interested public. Transmission Films

Anning and Murchison were firm friends in real life, and did indeed meet when Murchison’s geologist husband, Roderick, introduced them in Lyme Regis. But while the film depicts Murchison as a younger, helpless, melancholic wife, Murchison was Anning’s senior and a geologist in her own right.

Murchison was friends with other scientists including Mary Somerville (the first person to be called a “scientist”, rather than “man of science”). She worked alongside her husband on various geological field trips, and demanded the right to attend geological lectures at King’s College, London.

It is unfortunate that, in telling this story of one female scientist, the film diminishes the complexity and success of another. I wish Ronan’s Murchison had been given the chance to be depicted as the passionate geologist she truly was.

For the love of science

Anning’s life — both in fiction and reality — was centred around searching the coastline for fossils to sell.

The film version of Anning discusses and dismisses what her fossicking partner has found, including limestone (relatively fossil poor in that region of the world), calcite crystals, and the ammonites found in abundance: all accurate for the geology of the Blue Lias. 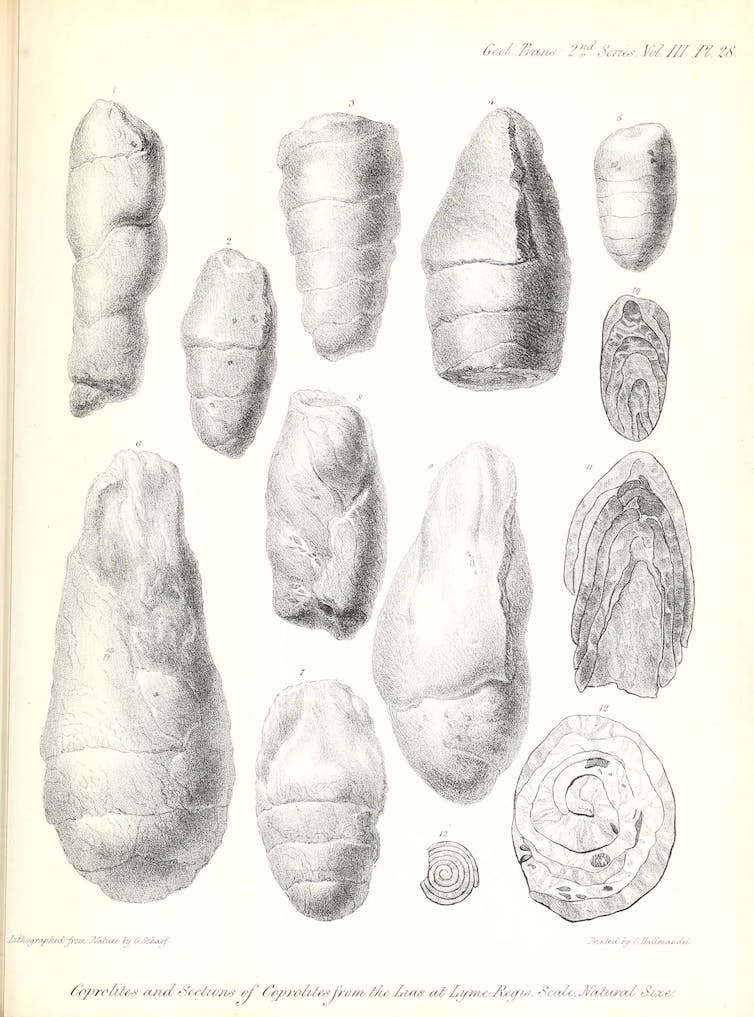 Illustration of coprolites from Lyme Regis, in Buckland, William. Transactions of the Geological Society of London. ser. 2, v. 3 (1835). Digitized by the California Academy of Sciences

She only pauses when examining a coprolite, a nice nod to the fact Anning was the first to correctly identify what were known as “bezoar stones” as fossilised faeces.

The film also accurately depicts the nature and dangers of the Dorset Coast. Landslides were and are common, revealing new fossil finds at the risk of injury or death.

Although not depicted in the film, Anning lost her pet dog Tray to a landslide in 1833. She wrote to Murchison:

Perhaps you will laugh when I say that the death of my old faithful dog quite upset me, the cliff fell upon him and killed him in a moment before my eyes, and close to my feet, it was but a moment between me and the same fate.

Landslide on the Dorset Coast, England.

Anning, sensitively played by Winslet, is a woman in poverty, who collects, prepares and sells fossils to survive — but treasures them nonetheless.

When given the opportunity to either live in comfort with Murchison and continue their relationship in secret, or return to a life of fossicking the treacherous Dorset coast, she chooses the latter.

Truth, openness and the freedom of finding fossils are more important to Anning than a closeted relationship with the woman of her dreams. 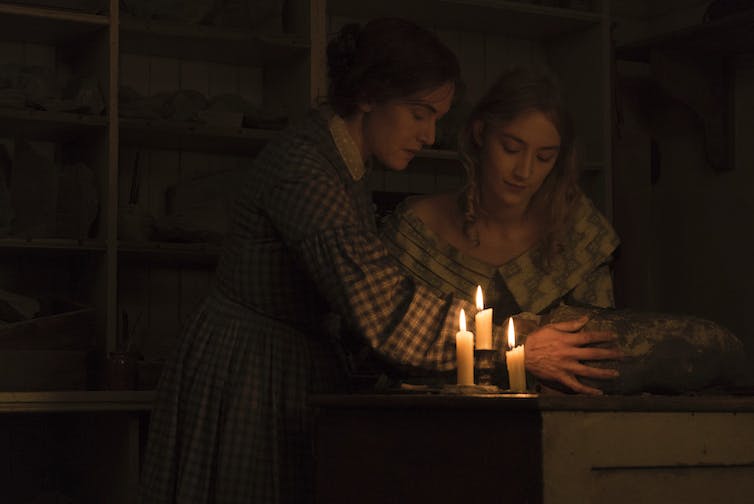 The real Anning never married; and Ammonite ends with her choosing her love of fossils over the love of her life. Transmission films

Unfortunately, while Ammonite — even with its liberties with the known facts — offers us an opportunity to reflect on the true story of this remarkable woman, Lee’s film is somewhat lumbering and poorly paced.

But through all of this, Winslet’s Anning is not a dispassionate scientist. She is a complex character who has suffered through poverty, loneliness and dismissal, and fiercely guards the life she has built for herself.

Ammonite is in cinemas now.