The landscape of eastern Australia is dotted with hundreds of extinct volcanoes. They gave rise to an environment to which Aboriginal people have been connected for tens of thousands of years, and the rich soils upon which modern Australia has grown in the last few hundred years.

Yet until recently, these volcanoes posed a geological mystery. There are two common ways volcanoes form: at the edges of tectonic plates, or on top of blobs of hot material called “mantle plumes”, which rise from the planet’s deep interior. For most of eastern Australia’s volcanoes, however, neither of these explanations fits the bill.

We have now solved the puzzle. By studying the history of the eruptions and the chemical makeup of the rocks they spat out, we discovered a previously unknown geological mechanism that links volcanoes from Far North Queensland to the southern tip of Tasmania.

You may be surprised to learn that hundreds of volcanoes erupted along the entire eastern side of Australia over the past 100 million years. This volcanism also extended offshore to New Zealand and the submerged continent of Zealandia.

Read more: What are lost continents, and why are we discovering so many? 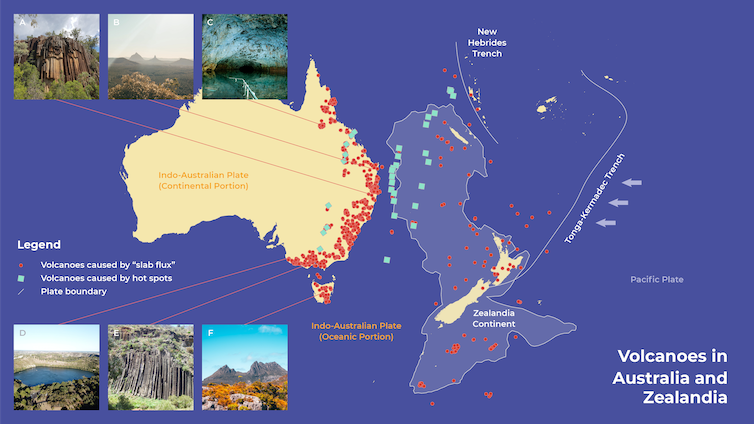 Most of the world’s volcanoes form when a process called “subduction” pushes parts of the seafloor down into Earth’s mantle, where it melts and produces volcanism at the surface. The best-known example of this kind of volcanism is the Ring of Fire around the Pacific Ocean.

Alternatively, chains of volcanic islands may be built by hot material rising from the Earth’s deep interior – called “mantle plumes” – in a process that created the likes of Hawaii, Iceland, and the Galapagos Islands. These so-called “hotspot chains” track the movement of tectonic plates as new islands form over a stationary mantle plume.

Most volcanoes are clustered near subduction zones, where oceanic crust is recycled into the Earth’s mantle, or above hotspots which create chains of islands in the oceans. University of Saskatchewan

However, most of the volcanoes in our backyard are not related to mantle plumes and are not close to plate boundaries. So why are they here?

Our study, published today in Science Advances, shows the frequency of volcanic eruptions in eastern Australia and Zealandia depends on what’s happening to the seafloor some 3,000 kilometres further east.

Why does this happen? It’s all to do with how much water and carbon dioxide are trapped in the seafloor, which is recycled down into the mantle.

Over many millions of years, a reservoir of these volatile ingredients has built up in the mantle, more than 410 kilometres below the surface. This reservoir stays dormant beneath the Australian plate, until tectonic forces create bursts of movement.

Read more: Australia's volcanic history is a lot more recent than you think

As slabs of seafloor are subducted at the Tonga-Kermadec Trench, which runs from New Zealand all the way to Samoa, the vibrations reach all way to the mantle reservoir beneath eastern Australia and Zealandia. As a result, water and carbon dioxide shake loose from the reservoir and rise up to produce volcanic eruptions at the surface.

Reconstruction of volcanism and subduction in eastern Australia and Zealandia since 120 million years ago in map view, visualised in AuScope enabled GPlates software.

Both episodes were produced by major reorganisations of Earth’s tectonic plates, in which the plates rapidly change speed and direction. These changes led to the subduction of a massive pile of western Pacific seafloor, which in turn caused volcanic activity as water and carbon dioxide were shaken from their reservoir in the mantle. 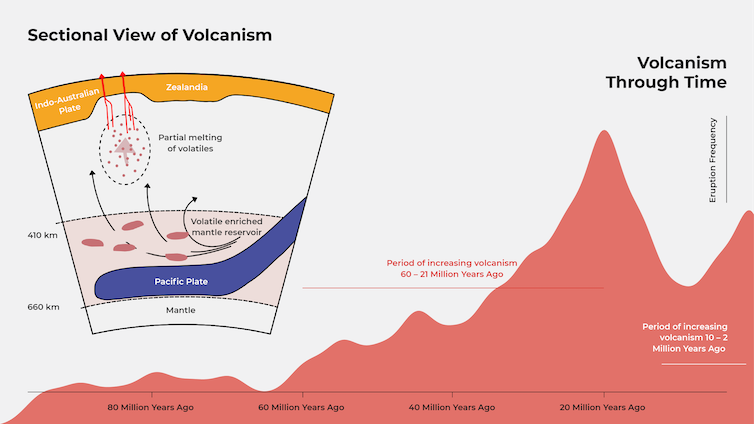 Our new model of volcanism shown as a slice through the Earth (sectional view), visualised together with the region’s volcanism over the last 100 million years. Jo Condon / Ben Mather 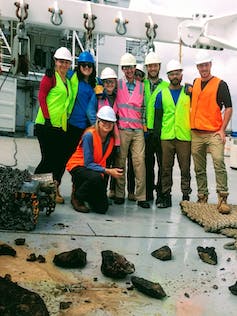 In 2019 we travelled aboard the CSIRO research vessel Investigator to collect rock samples from underwater volcanoes and map thousands of kilometres of seafloor. Supplied

This subduction process is not unique to the Australian east coast. What sets the east Australia-Zealandia region apart is that the seafloor being pushed under the continent from the western Pacific is rich in materials that contain water and carbon dioxide.

Not only that, but these materials seem to collect at a shallow depth in the mantle over a long period of time, rather than sink deeper into Earth’s interior. This creates a zone deep in the mantle right under the east coast of Australia that is enriched with volatile materials.

We examined the chemical composition of rocks produced by these ancient eruptions across the region and found the vast majority shared common chemical fingerprints. These fingerprints told us the eruptions across the eastern third of Australia and Zealandia came from a common mantle reservoir, which could only have formed from the subduction of ancient seafloor. This was the final piece of the puzzle that helped us connect seemingly random volcanoes over 100 million years of history.

New ‘eyes’ to explore abroad and at home

Combining the perspectives of volcanic history, tectonic plate movements and geochemistry may also help us to unlock other explosive mysteries of our natural world. We hope to test our model further in other enigmatic regions where volcanoes appear in the middle of tectonic plates, such as the western United States, eastern China, and around Bermuda.

In the meantime, we hope our discoveries give you a new way to look at the many beautiful volcanic hills and other features of eastern Australia. If you’re driving around the countryside this summer, here are our top five volcanic highlights for your travelling pleasure:

This study was carried out by researchers from the University of Sydney, Monash University and GNS Science in Dunedin, New Zealand. It was enabled by Australia’s National Collaborative Research Infrastructure Strategy (NCRIS) via AuScope and The Office of the Chief Scientist and Engineer, NSW Department of Industry.