Urban consolidation policies to contain development within existing urban areas are creating poor development outcomes in Australian cities. In Brisbane, our newly published research shows this means the low-density housing character of the city is being retained at the expense of backyards.

Current land development regimes place urban planning outcomes in the hands of property owners and developers whose motives are tied to their financial interests rather than good planning. In doing so, the system works counter to its intended aims, in that it favours “bad density” over meaningful place-making characterised by well-designed medium-density townhouses or low-rise apartments.

Read more: No need to give up on crowded cities – we can make density so much better

The ad hoc nature of redevelopment means consolidation is done in a piecemeal and patchy way. There is little uniformity to streetscapes and a poor mix of housing options.

What are the urban consolidation policies?

Our research, published in Australian Planner, focuses on the impacts of urban consolidation policy in central Brisbane. The Queensland government has set a target for Brisbane City of infill development – building within existing developed areas – to account for 94% of all new dwellings by 2041.

The state government defines an urban boundary to contain most new development. The state also sets dwelling targets by local government area, of which Brisbane is the country’s most populous.

At the local level, Brisbane City Council has a smaller-scale strategy. It aims for densification to be achieved through up-zoning (changing the zoning to permit higher density), increasing building heights and reducing minimum lot sizes.

At the same time, the council uses various mechanisms to protect the “cultural identity” of the city. These include the so-called “townhouse ban” and Character Residential (Infill) zoning, which applies to many inner-city suburbs.

The Character Residential (Infill) zone allows for higher density, but houses built prior to 1946 must be retained. Any new dwellings must be of a similar scale.

We analysed the rate of subdivision for house construction over a ten-year period. Focusing on the suburbs immediately south of the city centre, we compared subdivision for more houses to land assembly (merging two or more lots) for apartment construction.

We wanted to see how the physical layout of the city had changed so Brisbane could densify. How is this being achieved in a city that has banned townhouses, rowhouses and apartments of any size in more than 60% of the city’s residential area, but at the same time has had a policy of consolidating growth for decades? Specifically, we wanted to see how existing residential land was densifying, rather than former industrial or undeveloped land.

What does the research show?

Our results indicate that current consolidation policies run counter to their intended aims of protecting green space. The practical outcome is that the low-density housing character of the city is being retained at the expense of backyards.

We found 52% of redevelopments resulted from subdivision, compared with 30% from land assembly and 18% for all other reconfigurations. In the past decade, the seven inner-city suburbs we studied lost over 21,000 square metres of open space, usually backyards, to be replaced with more houses. 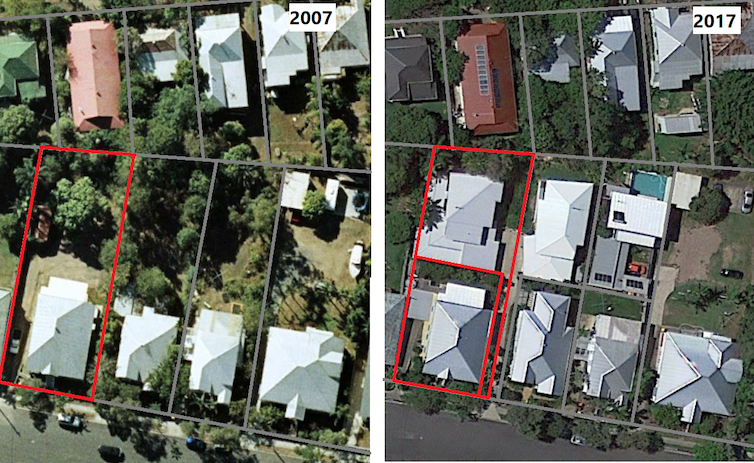 This is explained by a combination of developers’ lack of interest in residential infill, the difficulty of boundary change, and the political unpalatability of “density”. Together, these factors work to create outcomes in conflict with consolidation policy.

It’s inherently difficult to co-ordinate redevelopment across multiple properties for high-quality, precinct-level infill. On the other hand, individual owners can reap financial benefit from lot-scale redevelopment, without the costs associated with larger developments.

As a result, backyard subdivision is pursued as a simple form of infill. Despite the city council’s policy to “protect the Brisbane backyard” and the state government’s goal of more diverse and affordable homes, more single-family homes are being crammed into less and less space.

How can we improve outcomes?

While low-density infill may balance consumer preference for detached houses with meeting infill targets, it in effect creates a “compressed suburbia”. The results fail to deliver on the core promises of consolidation policy, including greater housing diversity and affordability, and a halt to urban sprawl.

It also leads to a dichotomy of new dwellings: high-rise apartments or detached houses. We found very little development of medium-density dwellings. 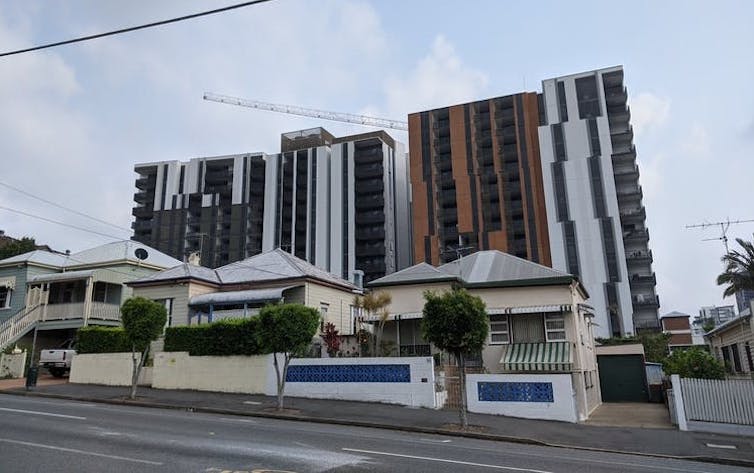 The market-based approach to urban consolidation leaves individuals seeking financial gain to determine the most important decision about our cities – their urban form.

If this continues, the lack of focus on high-quality infill will be a significant missed opportunity for our cities.