In a new series, writers pay tribute to fictional detectives on the page and on screen.

Detective fiction is my go-to when I need to wash away the exigencies of everyday life.

I’m not alone. Sales and TV viewing figures show the enormous popularity of the form; its benefits have been observed for mental health and well-being, and it provides theorists with the pleasure of analysing social structures, identity and political imperatives through its lens.

My favourite detective is Endeavour, though I admit that I don’t like Morse, a creation of the novelist Colin Dexter, which was voted the greatest British crime drama of all time.

I like Morse’s car, his taste in music, his capacity to disentangle mysteries as perplexing as Gordian knots. But I don’t like his old-man grouchiness and his dated gender politics.

This frees me to take real pleasure in the prequel centred on his younger self, Endeavour Morse (played by Shaun Evans), untrammelled by any need to relate Baby Morse to the curmudgeon he would later become.

Endeavour, or to quote critic Graeme Virtue, “Inspector Morse with a moustache”, has been attracting fans since the show’s 2012 inception. (The moustache has come and gone over seven seasons screened so far, but Endeavour’s quirky, difficult self continues to grab my attention.)

‘He thinks he’s the brightest person in the room, often,’ says actor Shaun Evans of his character.

An Oxford University dropout, Endeavour is brilliant, canny and willing to do whatever is necessary to achieve the public good. In this he is a closer match to the Ancient Greek king Odysseus, as depicted by philosopher Martha Nussbaum, than to television versions of Agatha Christie’s Hercule Poirot or G.K. Chesterton’s Father Brown. And like Odysseus, he seems always to be searching for a home.

Endeavour is unimpeachable, displaying a touch of arrogance that frequently offends others, especially Chief Superintendent Bright (Anton Lesser) who regularly slaps him down. His self-belief similarly puts off the the dons and upper-crust toffs he encounters in his investigations.

When Morse starts out he is told to keep his head down and his nose clean. He doesn’t always follow that advice.

Step back in time

The story begins in the early 1960s, in a Britain still recovering from war, and it progresses, season by season, to 1970. It is beautifully filmed, providing all the visual nostalgia one could hope for: heavy-flanked cars, aggressively loud wallpaper, dim and grim interiors. Outside, there is the glowing presence of the dreaming spires that signal “Oxford” to the viewer.

There’s a piling up of bodies, week by week, that is worthy of Midsomer Murders, all underscored by haunting music created by the prolific Australian composer Barrington Pheloung, who died last year and was said to sneak clues and red herrings into his compositions.

A real delight is found in the community Endeavour inhabits. Alongside Chief Superintendent Bright is the lugubrious Detective Inspector Fred Thursday (Roger Allam), who doubles as Endeavour’s surrogate father. 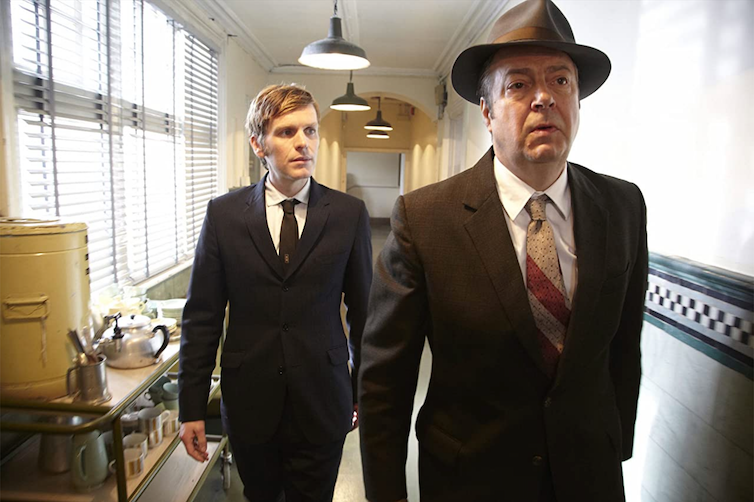 Young Morse looks up to DI Fred Thursday, a father figure in the series. IMDB

Colleagues include DC Jim Strange (Sean Rigby) — less capable than Endeavour, but much better at the institutional game. There is also the rather unfocused and short-lived DC George Fancy (Lewis Peek); and George’s girlfriend, WPC Shirley Trewlove (Dakota Blue Richards), who matches Endeavour in insights, observation and clarity of thought, before heading off to greener pastures after her Fancy is killed in action.

(Note the cryptic poetry of the officers’ names, which seem to be crying out for a code-breaker — and note too: Endeavour was a cipher clerk before joining the police.)

Outside the station community we get to know Thursday’s wife, Winifred (Caroline O’Neill), and their daughter, Joan (Sara Vickers), for whom Endeavour hopelessly yearns. Both women are independently minded and their stories help shape the narrative arc of the series.

There’s the nurse Monica Hicks (Shvorne Marks), Endeavour’s neighbour and, for a time, his girlfriend. She is tender and generous, but finally intolerant of his failings in romance. There’s also the courageous, ethical editor of the Oxford Mail, Dorothea Frazil (Abigail Thaw, daughter of Morse star John Thaw).

Read more: My favourite detective: Kurt Wallander — too grumpy to like, relatable enough to get under your skin

Endeavour wears his Oxford education lightly, but draws on its foundation to solve the crimes; his fellow officers routinely turn to Endeavour to find answers to the really complex cases — particularly those that depend on opera, or archaic poetry, or codes. Consistently he fulfils what philosopher Slavoj Žižek calls “the detective’s role” — to demonstrate how the impossible is possible.

He sees the order in apparently random events; demonstrates how a distraught woman had in fact arranged the murder-at-a-distance of her husband; recognises where the killer is likely to make his next appearance; stitches together hints and glimpses so he can deliver the checkmate move in whatever case he is pursuing. What seems impossible, or magical, becomes lucid under his analytical gaze.

Finally, Endeavour reminds me how difficult it was to be young. To know you don’t fit in any of the places where you need to be. To have conviction in some aspects of life and be so uncertain in others.

Endeavour must accommodate triumphs that deliver not restoration to order or, in the words of fellow Oxford man W.H. Auden, “the state of grace in which the aesthetic and the ethical are as one”. Rather, his successes give way to an exhausted and saddening awareness of how damaged everyday people are, stumbling through our everyday lives.