How does a virus stop? — Angela Gaganis, year 1, Adelaide

There’s a scene in the movie “Wreck It Ralph” where Sergeant Calhoun describes some of the bad guys, called “Cy-Bugs”.

Calhoun says “Cy-Bugs are like a virus… All they know is eat, kill, multiply”. She goes on to say “viruses do not stop!”

Well, do they? It’s a great question, Angela.

It can be confusing when some people, like the president of the United States, say this new COVID virus will go away on its own.

The short answer is that while some viruses gradually disappear, most viruses don’t just “go away”.

Viruses are actually really clever at finding ways to hide, just waiting for an opportunity to come back.

Some viruses do disappear

You might already know that some viruses give us the flu. You might not know that every flu virus that infected humans until about 120 years ago has now disappeared (or “gone extinct”, as scientists say). Some other more recent ones have disappeared too.

For instance, the virus that caused a terrible flu outbreak in 1957, which killed about 100,000 people in the United States, has now disappeared. 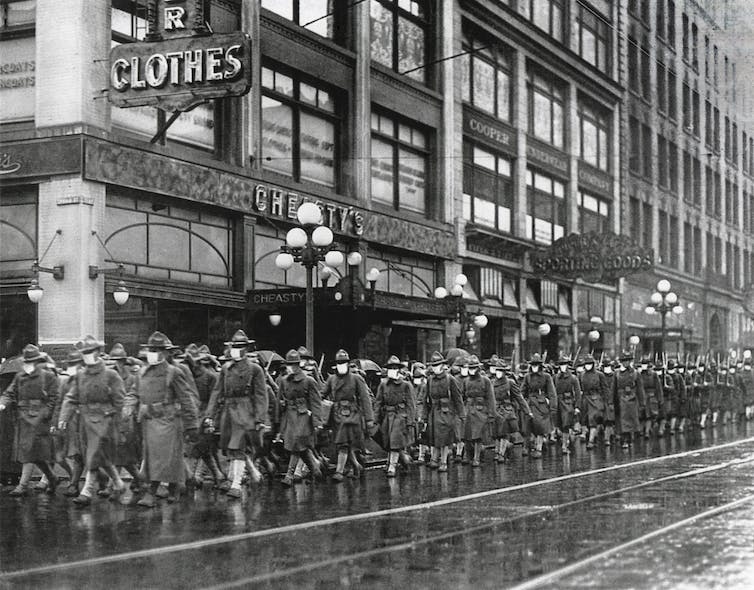 The ‘Spanish flu’ has mainly disappeared. But COVID will probably be with us for a long time. Shutterstock

A virus that caused a horrible disease called “Spanish flu” is another good example. Back in 1918, this virus caused a worldwide disease outbreak (a pandemic) and lots of people sadly died. The virus continued to pop up in some places until 1921.

But by then, lots of people were immune to it, because their bodies had learned how to fight it off. This meant it didn’t carry on spreading like a pandemic, but instead just popped up here and there.

Because of this, the strain that caused the pandemic mainly disappeared.

So can we get rid of the COVID virus too?

Sometimes we try to make a virus go extinct on purpose. We generally use vaccines (sometimes called “needles” or “jabs”) to do that. A vaccine helped us get rid of a virus called smallpox, which used to be one of the world’s scariest diseases.

Vaccines are also hopefully going to get rid of viruses called polio and measles.

Scientists are trying as hard as they can to make a COVID vaccine. In fact we might end up with more than one type of vaccine to fight the COVID virus.

If we do get them, they will help a lot but might not stop the virus completely. This means some people would still get infected, although nowhere near as many people as before.

The situation is a bit similar to another new disease, called swine flu, which appeared about 11 years ago. It was different from other flu strains, so it spread a lot and became a pandemic. The same thing has happened now with COVID.

About one person in every ten people in the world caught the swine flu virus before scientists could make a vaccine.

After a year, the vaccine had arrived and less and less people were getting swine flu. The swine flu virus didn’t disappear — it was still hiding out ready to infect people. But because we had a vaccine, not as many people got sick.

How and when will COVID end?

SARS is a virus similar to COVID. It was identified in 2003 and infected more than 8,000 people. But since 2004, it has not been seen again in humans.

We got rid of it by doing a mixture of different things. This included isolation and quarantine, which you might know as “iso”.

We’re using similar measures to fight COVID. So why did they work to stop SARS, but haven’t got rid of COVID yet?

One big problem is that COVID can spread without someone even feeling ill. This means you can pass it on even if you don’t have a cough or a runny nose.

For this reason, some scientists say we will never be able to make the COVID virus go away completely.

Instead, it will probably become a disease that makes some people sick every year, like the flu. It will almost certainly be with us for a long time, even after the pandemic is over.

Hello, curious kids! Do you have a question you’d like an expert to answer? Ask an adult to send your question to curiouskids@theconversation.edu.au