Within minutes of news that crew members of the cargo ship Fesco Askold had tested positive for COVID-19, a social media storm broke across Samoa. COVID-free until then, the island nation’s anxiety was understandable. More so when you consider its history.

Memories of the deadly 2019 measles outbreak were still fresh. But more distant events resonated just as much. Next to images of the cargo ship in the harbour, people were posting pictures of the Talune, the infamous “ship of death” that brought the Spanish influenza virus to Samoa in 1918, devastating the population.

The Fesco Askold had docked in Apia, Samoa, on November 7, before sailing to Pago Pago in American Samoa, where the crew apparently tested positive. Panic increased when a hoax email claimed a school child was a direct contact of a port worker and all parents should immediately collect their children.

The government later corrected the arrival date of the cargo ship in Apia to November 8. None of the crew had left the ship and there was no contact between them and Samoan harbour pilots. Offloaded containers had been sterilised.

The crisis passed, but within weeks another positive COVID-19 test was reported in a quarantined sailor who had arrived in Samoa on a repatriation flight from New Zealand on November 13.

When further tests showed negative results, swabs were sent to Wellington for more analysis. When these were inconclusive, blood samples were sent, with results still pending.

Meanwhile, a chartered flight from the US was due to arrive in Samoa with up to half of the 300 passengers returning sailors. The flight was postponed this week. Two more repatriation flights from New Zealand scheduled for early December are still to be confirmed. 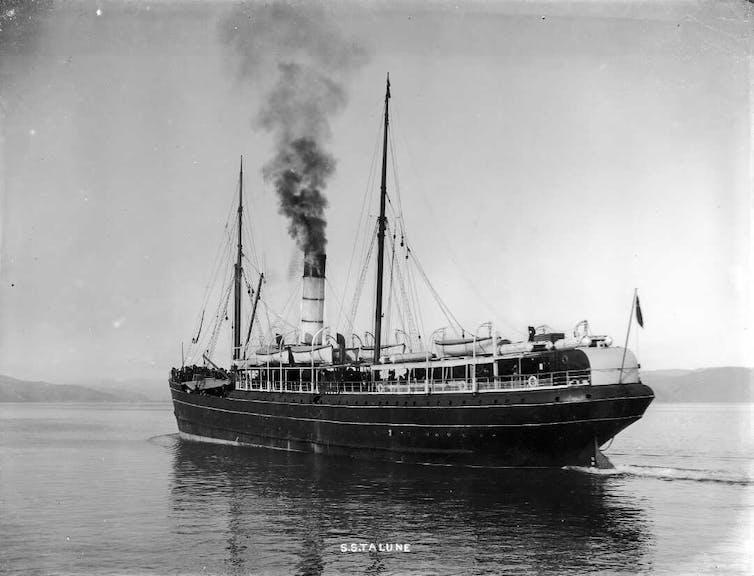 The influenza and measles tragedies

Both New Zealand and Samoa are highly sensitive to the risks of disease spreading. The Talune was quarantined in Fiji in 1918, but no such precautions were taken in Samoa, then under New Zealand administration. Infected passengers were allowed to disembark. Over a fifth of the Samoan population died as a result.

In 2002, the then New Zealand prime minister, Helen Clark, made a formal apology in person to the people of Samoa for the grievous error of a past government. But in 2019 a measles epidemic that began in New Zealand rocked Samoa, killing 83, nearly all young children. Official inaction by New Zealand was blamed for the tragedy.

While Aotearoa New Zealand has done well controlling COVID-19, Samoa is not nearly as well resourced. Health facilities and expert staff are stretched at best. Furthermore, there are many existing health problems, making the population particularly vulnerable to the virus.

Pictures from other countries of mass graves being prepared for COVID-19 victims trigger traumatic memories in Samoa. Many were buried in this way in 1918 — and even more recently after the devastating 2009 tsunami.

For Samoans, as for all Pasifika people and Māori, a mass grave is particularly soul-destroying. To be buried without identification and acknowledgement of who the dead are, and their many familial connections, goes against custom and culture.

Samoans mark every rite of passage from the womb to the tomb. This is the basis of our communal structure, embedded in the customs and practices of the Faamatai — more commonly known as the Faa-Samoa or “the Samoan way”. 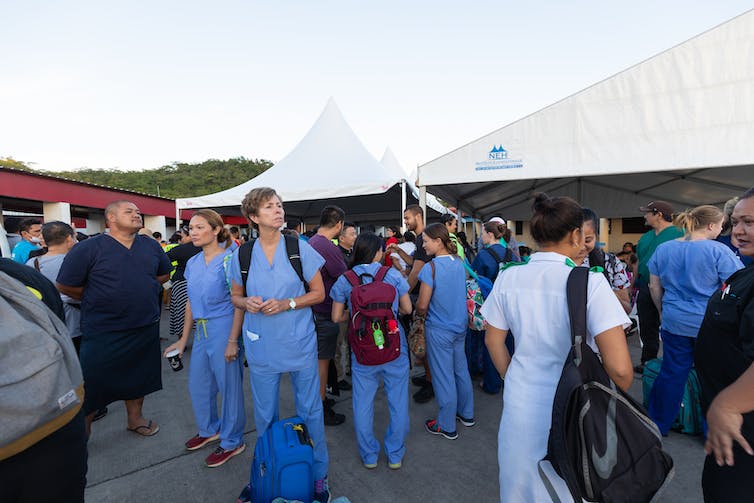 Volunteers and aid workers in Apia, Samoa, during the measles vaccination campaign in 2019. GettyImages

The lasting effects of 1918

The impact of the 1918 epidemic is also still felt in the laws and political systems of Samoa. In the Land and Titles Court, for example, people represent themselves in an inquisitorial forum reflecting Samoa’s history as a German colony from 1900-1914.

Since 1918, it is not unusual to hear (or read in written petitions) a heartbreaking phrase: Ua tuua ia tama lenei aiga — in our family only the children remained.

For many Samoan families the tragedy resulted in the loss of matai (chiefly) titles and the customary lands owned by those names. The fight by later generations to reclaim their heritage has, rightly or wrongly, given the court its contemporary power, influence and value.

Read more: New cyclone forecasts: why impacts should be the focus of hazardous weather warnings

Right now, Samoans are preparing for a general election in April 2021. The government’s handling of the pandemic is likely to play a major part in campaigning and voting. As a recent Newsline Samoa opinion column was headlined: COVID-19 is a Deadly Virus Not an Election Winner.

Given the current situation and the country’s history, the panic of November 9 was to be expected. Prayers and pleas that this latest plague will pass over Samoa and spare its people are still on the lips of every Samoan, whether they live there or elsewhere.

They know their country could not withstand the ravages of COVID-19 should it reach their shores. In Samoa, 1918 is not a distant memory.