I’ve spent more of my life with pardalotes than with most other acquaintances. They are an obscure and odd group of four species of small (thumb-sized) birds. They have little public profile, not helped by the awkward name. But they are quintessentially Australian, occurring nowhere else in the world.

As a boy, I chanced upon a pair of spotted pardalotes absorbed in constructing their nesting burrow, a long tunnel built into sloping earth. Whereas most of the bird’s existence is spent unobtrusively foraging in tree canopies, breeding brings this species to ground, allowing close observation by the quiet but inquisitive.

My interest was piqued by their industry, beauty and strangeness. The intrigue stayed with me. Later, a PhD in zoology gave me the opportunity to study them in detail. 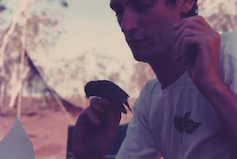 The author as a young man, with a pardalote. Author provided

Zoology is a charmed science. Done well, it offers the opportunity to escape the conformity, constraints and solipsism of the human perspective; to see and understand the world from the viewpoint of another species, where space and time differ from the conventions we’re used to, where the ordering of the importance of things is upended, where the elements of the natural world come far more sharply into focus and are imbued with different meanings.

Zoology offers shapeshifting, and the insights that brings. It has taken me to many places, and a little into the diverse minds of remarkable species.

So, for three years I counted pardalotes at many sites and over many seasons. I caught thousands, with wire-mesh traps at the entrances to their nesting burrows or with carefully sited nets. I attached leg bands, so I knew the identity of individuals. I weighed them, measured them, described the subtle variations in their jewelled plumage.

I watched them for hours every day, recording the plant species in which they foraged, and what they ate. I studied their mating habits, their breeding success, their territoriality and social interactions.

I reassessed my initial conception of them as placid when my experiments with a dummy pardalote and call playback triggered violent responses from territorial males. I examined the factors that threatened and killed them.

I found that they have long adapted to and exemplify an Australian ecology: they fit this country well.

They forage almost entirely in eucalypts, that linchpin and defining feature of many Australian environments. Their diet is unusual, comprising mostly the sweet exudate (manna) that seeps from eucalypt foliage, and “lerp”, the sugary coating of psyllid insects (a specialised group of bugs) that suck the phloem (the “sap” in leaves) from within that foliage. 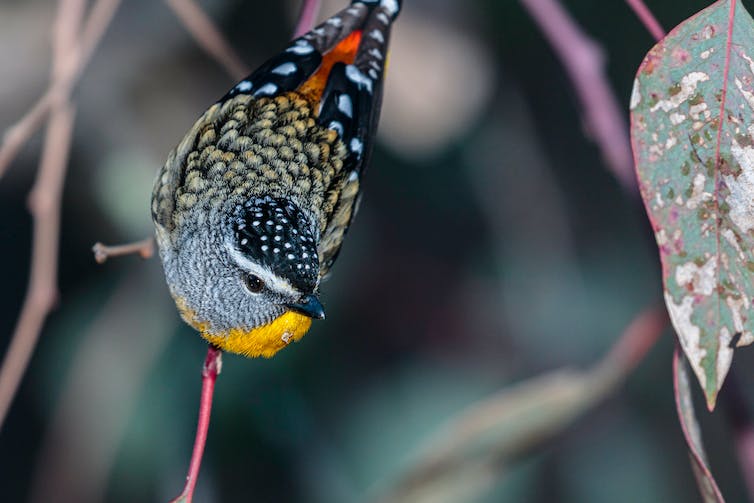 This strange resource is itself a consequence of the Australian environment – our soils are typically so poor that trees capturing nutrients must also drink up an excess of carbohydrates that they then need to secrete.

The eucalypt/lerp/pardalote web is an intricate arrangement, played out in kaleidoscopic variation in different regions, with varying eucalypt, psyllid and pardalote species.

Season adds a further dynamic to the landscape, with insect abundance diminishing in cooler areas in winter. So, like many other animal species, the pardalotes must track the ebb and flow of resources across our country, else stay put and starve.

Indeed, episodes of mass mortality of pardalotes have been recorded in some winters. Some populations of these tiny birds cross formidable Bass Strait each year, heading from Tasmanian summers to the mainland for winter. Others disperse in a less orderly manner, nomadically tracking more unpredictable booms and busts of psyllid populations. 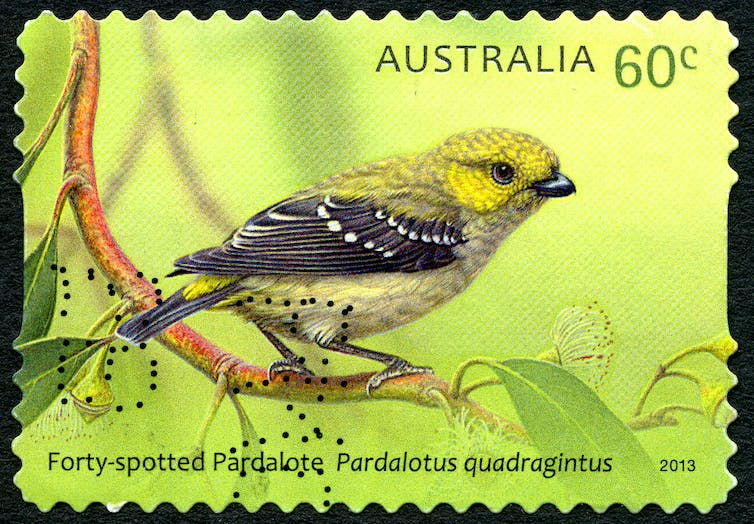 The forty-spotted pardalote, seen here on a postage stamp, is now endangered. shutterstock

Such nomadic movement is a distinctive feature of many Australian birds, contrasting markedly with the more rigid migration routes typical of birds on other continents – our seasonal patterning is more subtle and complex. But the ageless dispersal pathways of pardalotes have been subverted.

Clearing has broken the continuity of the forests, rendering dispersal more hazardous. In little more than 200 years, about 40% of their forest home has been destroyed, directly causing a comparable proportional loss in their population size.

Pardalotes have other threats. Around 10% of their habitat was burned in the severe wildfires of 2019–20, with those fires most likely killing the birds directly, and leaving burned habitat unsuitable for their re-establishment for at least several years.

In many parts of their range, the manner in which we have degraded and fragmented their forest and woodland habitat has benefitted a small suite of aggressive honeyeaters – the native noisy miner and bell miner – and these miners can kill pardalotes and exclude them from otherwise suitable habitat.

Ecology is a complex network with many interwoven threads, and manipulation of one thread can have many reverberating impacts. We play with those threads at our peril.

From a human perspective, our land is mostly familiar, comforting.

But studying any Australian animal almost always leads to a crystallisation, a deciphering, of the destabilising manner in which we’ve contorted the ecology of this place. Purposefully, incompetently or haphazardly, we have rearranged the ecology of this land to suit our needs, and in doing so have rubbed away much that was integral to the existence of many other species.

We are corroding our nature and will pass on to our descendants a land that is less healthy, less diverse, less wonderful.

Notwithstanding the less secure life most pardalotes now face, three pardalote species remain reasonably abundant and widespread. However, one species – the forty-spotted pardalote (a charming and apt name) – has been particularly hard-hit by the changes we have wrought to its environment. 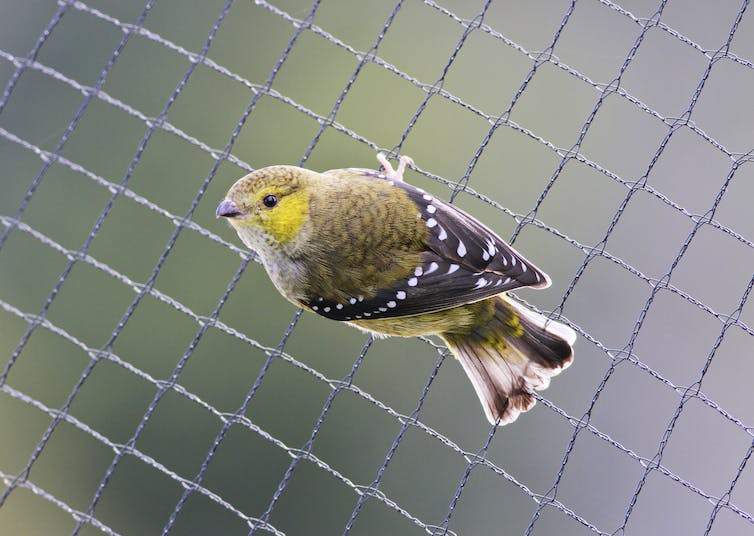 Now recognised as endangered, it has declined extensively and been reduced to a few populations (in beautiful locations) on some islands off Tasmania, with a fragile toehold at several small sites on the Tasmanian mainland. We still have the chance to save it, but that opportunity may soon be lost.

I no longer study pardalotes. But in the soundscape of my days, their intermittent call can still lure me away into lives that are not my own, into different ways of knowing our country and its workings, of the damage we’ve done and the healing we have yet to do.