Over 37 million Myanmar citizens, including 5 million first-time voters, will go to the polls on November 8.

The election represents a litmus test for the popularity of National League for Democracy (NLD) leader Aung San Suu Kyi, who was placed under a house arrest by the military for about 15 years intermittently between 1989 and 2010.

Much is at stake in this election, but the role of the military still looms large in Myanmar politics.

The constitutional change needed to further democratise Myanmar is impossible without the military’s consent, so achieving major political transformation through the election alone seems unlikely. 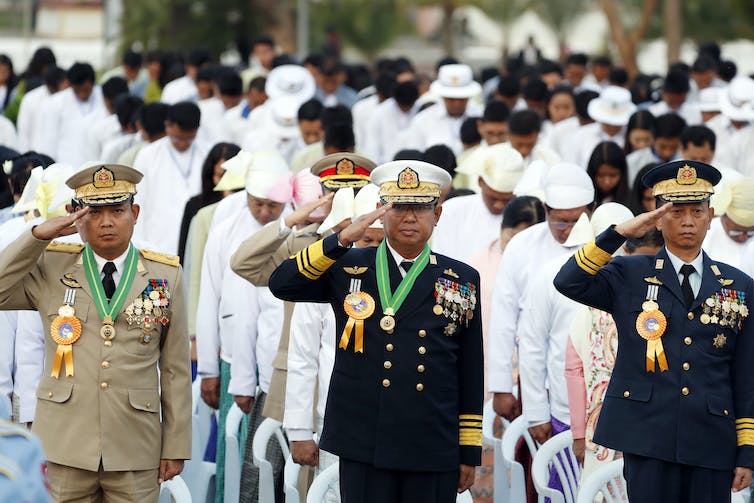 Read more: Rohingya genocide case: why it will be hard for Myanmar to comply with ICJ’s orders

In 2011, after about five decades of military rule, the military nominally handed power to the government of President Thein Sein and his Union Solidarity and Development Party (USDP).

Soon after, in the 2015 election, Suu Kyi’s NLD party won a landslide victory. She is now Myanmar’s incumbent state counsellor (equivalent to prime minister) but her international standing has taken a hit in recent years.

Critics accuse her of allowing widespread abuse of minority Rohingyas. Many Rohingya villages were burned down during a military crackdown in 2016 and 2017. Over 900,000 Rohingya — including more than 400,000 children — fled to Bangladesh and a large number of Rohingya refugees are dispersed across Southeast Asia.

Meanwhile, armed conflicts between ethnic armed organisations and the military continue, especially in the Rakhine state and the northern borderlands, and Myanmar’s transition to democracy is faltering.

Suu Kyi’s NLD and its main rival, the USDP, are the two largest political parties vying for a majority of seats.

With its origin in the bloody 1988 anti-government uprising, the NLD has long fought for democracy and freedom.

The USDP (currently chaired by Than Htay), on the other hand, was formally registered in June 2010 with tacit support from the military. However, the USDP’s recent decision not to favour retired military generals as candidates indicates its ties with the military are weakening. 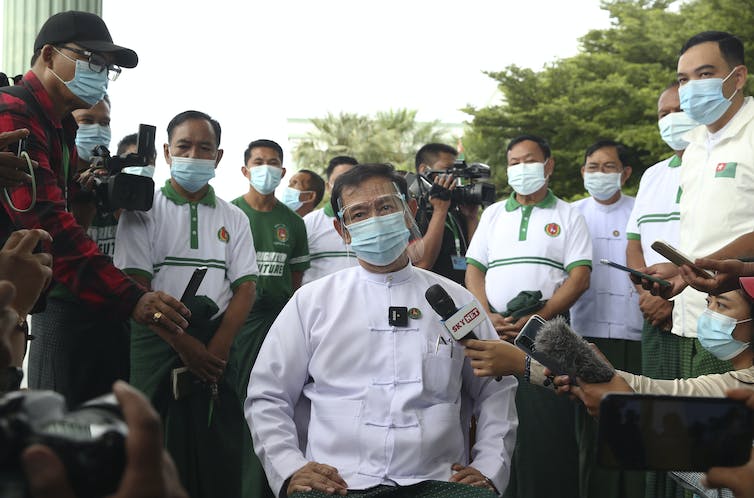 Than Htay is the current chair of the military-backed Union Solidarity and Development Party (USDP). Aung Shine Oo/AP

Many smaller parties and alliances are emerging and some, such as the People’s Party and the United Political Parties Alliance (UPPA), are likely to divide NLD’s traditional voters.

Two new political parties, the Union Betterment Party and the Democratic Party of National Politics, both formed by ex-military generals, will likely split the military sympathisers and cut into the USDP’s traditional voter base.

In states such as Kachin, Shan, Rakhine, Mon, Chin and Karen, many ethnic parties have recently merged to form a united front. They aim to win a majority in state parliaments and claim most of the national parliament seats in their states. These mergers may also weaken the NLD’s position; it had performed well in ethnic majority states in 2015.

Despite some notable economic and policy reforms, many ethnic parties are dissatisfied with the NLD government for the slow pace of transition from the military rule.

As the COVID-19 pandemic restricts freedom of movement, the candidates will be forced to campaign largely through social media and traditional media, which might work in the favour of larger and better-resourced parties. Not all parties and candidates have the finances to run online campaigns.

The election campaign will bring to light complex issues around Myanmar’s rich ethnic diversity: the continuation of armed conflict, demand from ethnic minorities for federalism, devolution of state power and better economic opportunities. 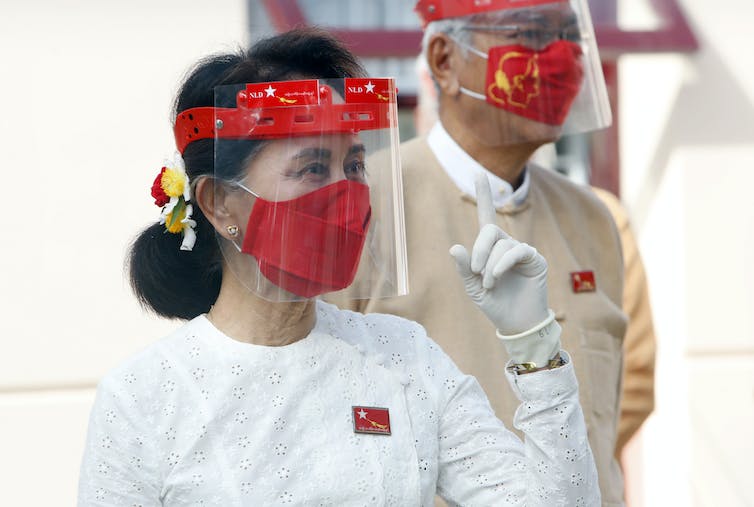 Myanmar’s economic and infrastructure development has been limited and, as my research argues, has been manipulated for political gain by powerful interest groups.

This has helped radicalise a section of Buddhist extremists. The middle class and rural poor haven’t benefited greatly from development policies; more than 24% of people still live below the national poverty line.

Deep reforms for a federal system and equitable economic development policies are needed to bring real progress toward peace between ethnic armed groups and the government. The way land ownership and natural resources are managed would need to be overhauled. Such reforms, however, are constrained by provisions in Myanmar’s constitution that ensure state power is shared with the military.

The constitution allows the military to occupy 25% of parliamentary seats. Only serving military officers can lead the three most powerful ministries – defence, home affairs and border affairs. This makes the military a very powerful political institution, which effectively controls the peace process and the direction of the transition.

The Rohingya crisis: ‘seems a textbook example of ethnic cleansing’

The persecution of Rohingya Muslims in Myanmar, which then-United Nations human rights chief Zeid Ra‘ad al-Hussein said in 2017 “seems a textbook example of ethnic cleansing”, continues to loom large in Myanmar politics. It has created one of the world’s largest refugee crises. 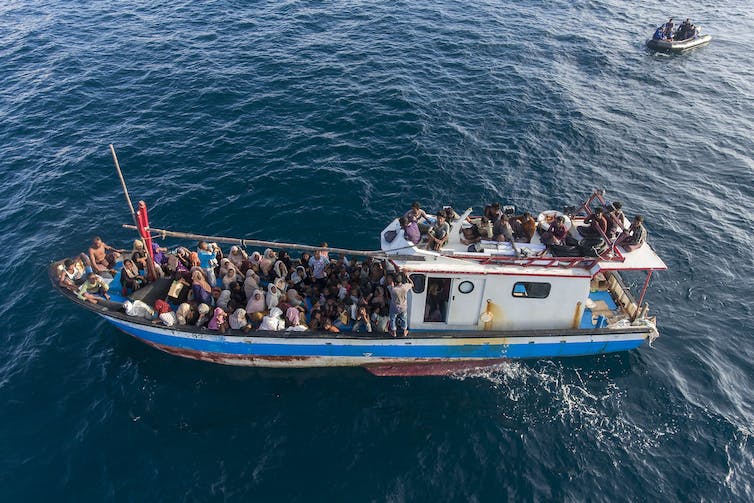 Many international observers have criticised Suu Kyi’s silence on the Rohingya crisis. Inside Myanmar, however, her popularity remained strong (especially among the country’s majority Bamar community) as she was called to answer for allegations of genocide made at the International Court of Justice late last year.

The Bamar community makes up about 70% of the country’s population and is the major voter base of Suu Kyi’s party. They largely consider Rohingyas illegal migrants, despite the fact many have lived in Myanmar for generations. A section of the community supports radical Buddhist nationalism and resists ethnic pluralism.

The Rohingya crisis has made ethnic minority voters deeply sceptical of Suu Kyi, but within the Bamar community, Buddhist nationalist narratives have surged and may come to dominate electoral campaigns. 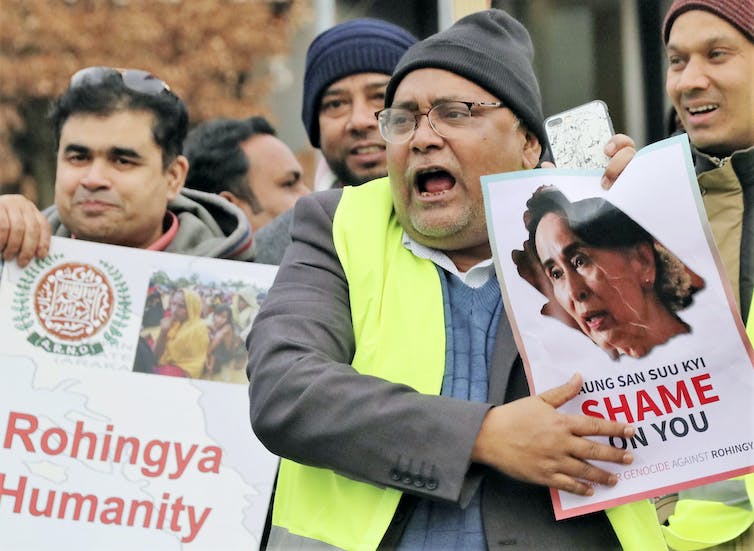 Critics protested against Aung San Suu Kyi outside the International Court of Justice, during a case brought by The Gambia alleging Myanmar has committed genocide against the Rohingya. AP/KYDPL KYODO 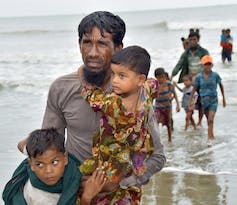 The Rohingya crisis forced many to flee and has made ethnic minority voters deeply sceptical of Suu Kyi. AP/KYDPL KYODO

What’s the outlook for reform?

Myanmar’s military has frequently resisted constitutional reforms that would reduce its power.

If, as is expected, Suu Kyi’s NLD wins a majority this year, the military will likely collaborate with its allies in the parliament to block any constitutional reform.

If Suu Kyi’s political rivals — the USDP and other smaller parties and alliances — obtain a larger presence in the parliament, no single party will have a big enough majority to push through constitutional reforms. This will ultimately benefit the military and delay the transition to democracy.