The Australian government committed more than A$247 million over 2019-22 to continue funding chaplains in Australian schools. The National School Chaplaincy Program aims to “support the well-being of students through pastoral care services and strategies”.

Since its inception by the Howard government in 2006, there have been concerns from many, including parents and education unions, about the religious affiliations of chaplains, and the conflict this presents when they work in secular schools.

It’s worth recapping what’s known about how the chaplaincy program has operated so far, and what alternatives exist.

Are all chaplains religious?

The 2018 agreement on the national chaplaincy program, between the Commonwealth government and all states and territories, sets out that the states must ensure chaplains may be of any faith. States must also ensure chaplains do not proselytise — that is, convert or attempt to convert a student to their religion.

But the agreement also says a chaplain must be “recognised through formal ordination, commissioning, recognised religious qualifications or endorsement by a recognised or accepted religious institution”.

The ACT ended the chaplaincy program in 2019 saying the fact that chaplains must have a religious affiliation is incompatible with the education act. In March 2019, Victoria agreed to change the job description of chaplains to say they could be of any faith or no faith. However, recent reports suggest non-Christian counsellor applicants are still being denied employment in Victoria on the grounds of their faith.

And there have been reports of chaplains being encouraged to promote a Christian theology course to students in NSW.

Under the national agreement, chaplains are required to “respect, accept and be sensitive” to the beliefs of others. But it is possible some chaplains are unable to support children (LGBTIAQ+ students for instance) whose lives do not align with their religious affiliation.

An independent evaluation of the chaplaincy program — conducted from 2016-17 across government, Catholic and independent schools — concluded chaplains are “highly effective in boosting student well-being”. However, principals said only 30% of children received support from the school chaplain. And only 134 students nation-wide provided feedback.

This means there is still a distinct lack of evidence as to whether the chaplaincy program is effectively supporting children and young people’s mental well-being.

Authors of the evaluation highlighted that staff saw the chaplain as being good at supporting the emotional well-being of students. This included helping students manage relationship issues and to develop self esteem.

But chaplains were seen as less equipped to manage complex student problems. These included alcohol and drug abuse, sexuality, self-harm and suicide, academic achievement, and student exposure to violence, racism and neglect.

Read more: Talking about suicide and self-harm in schools can save lives

These limits are unsurprising, as the role of chaplains under the program is well-being support.

What are the alternatives to chaplains?

A chaplain in the government program must have a certificate IV in youth work or pastoral care. This must include competencies in “mental health” and “making appropriate referrals”. The courses can be completed within 12 months and have no minimum entry requirements. 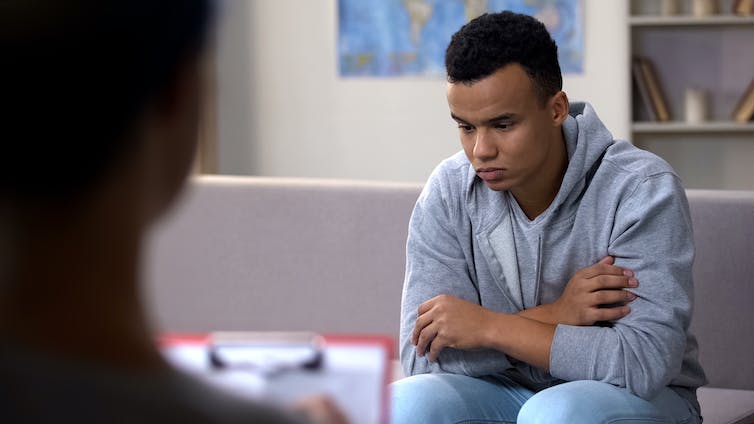 Schools could employ counsellors, psychologists or social workers instead of chaplains. Shutterstock

In comparison, school psychologists must have a minimum six-year sequence of education, training and supervision. Psychologists are trained in managing students with academic issues, complex personal issues, psychological issues and those related to self-harm and suicide.

Psychologists are also required to maintain minimum standards for continued training and supervision to retain their registration.

Psychologists are relatively expensive in comparison with chaplains, and can be difficult to access due to their demand. The average psychologist salary in Australia is $90,900 per year. This falls well short of the $20,280 offered through the chaplaincy program. It would only be enough for psychologists to work little over one day per week in schools, unless the school supplemented the funding.

Chaplains can also only be employed part-time if schools are not supplementing the government funding.

Schools could employ the less expensive but lesser-trained counsellors. But people aren’t expected to have specific qualifications or accreditation to work as a counsellor in Australia. The average salary for counsellors in Australia is $82,578 per year.

At the moment anyone can call themselves a counsellor regardless of their training, including people with no training at all. In contrast, the title of “psychologist” is protected.

Employing social workers in schools would likely support children and families, particularly those with more complex needs. Social workers in Australia are required to completed a bachelor of social work and are paid an average $85,331 per year.

Read more: A traumatic past can make you a better social worker, but it might block you studying it in the first place

There isn’t a one-size-fits-all solution to our youth mental health crisis. But we do need better regulation of mental health practitioners and further evaluation of the role and impact of psychologists, social workers, counsellors and chaplains in schools.

The 2019 submission to an inquiry into mental health (by a national professional association for school psychologists, school counsellors and guidance officers) recommended schools stop spending money on “staff unqualified to occupy titles in schools if they are ill-equipped for the purpose of professional student mental health support”.

Substantial funding of any program should be linked with rigorous evaluation. Evidence about the extensive mental health and well-being needs of children and young people at school should be considered in any decision on national program funding.