CC BY-ND Climate Explained is a collaboration between The Conversation, Stuff and the New Zealand Science Media Centre to answer your questions about climate change. If you have a question you’d like an expert to answer, please send it to climate.change@stuff.co.nz I recently read an article stating the atomic bomb testing in the Pacific destroyed so much of the upper atmosphere that the US could no longer bounce communications off the atmosphere and had to deploy artificial satellites for communication. Is this true? And just how much damage did they do? The article the question refers to doesn’t mention satellites, so let’s focus on the atmospheric damage part of the question. Indeed, surface and atmospheric (high-altitude) detonations of nuclear weapons can have short-term and long-term effects. One short-term effect was a temporary blackout of long-distance high-frequency (HF) radio communication over the surrounding area. But this radio communication blackout was not a result of the nuclear explosions destroying the ionosphere. Read more: Climate explained: Sunspots do affect our weather, a bit, but not as much as other things On the contrary, the nuclear detonations temporarily increased the natural level of ionisation in the upper atmosphere. The ionosphere and radio communication The Earth’s ionosphere is a natural layer of charged particles at approximately 80-1,000km altitude. This ionised portion of the Earth’s upper atmosphere largely owes its existence to solar radiation, which strips electrons from neutral atoms and molecules. The ionosphere consists of three major layers, known as D, E and F layers. The lower D and E layers typically exist only during daylight hours, while the highest F layer always exists. 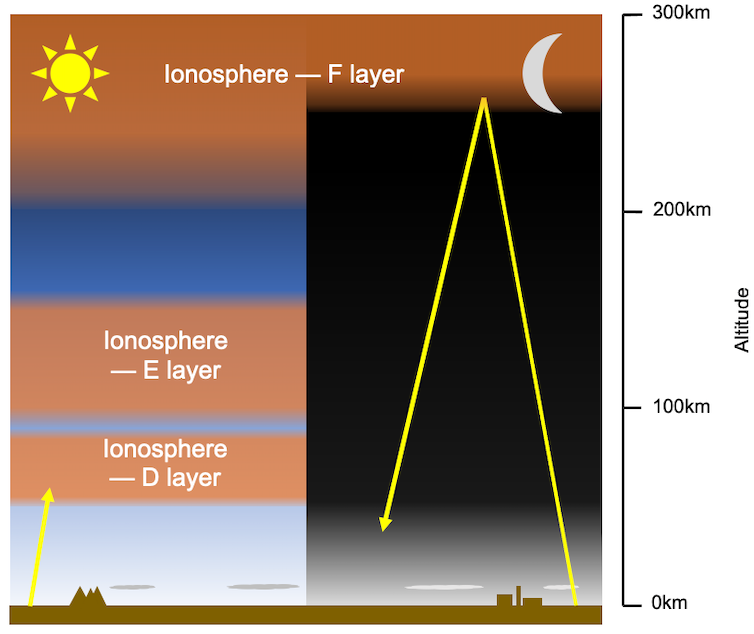 The ionosphere showing the approximate levels of the D, E and F layers. The D and E layers are much weaker at night time. The two yellow arrows show example ray paths of high-frequency radio waves from transmitters at ground level. Encounters with the D layer will result in some absorption. The Conversation, CC BY-ND These layers have distinct characteristics. The E and F layers are very reflective to HF radio waves. The D layer, on the other hand, is more like a sponge and absorbs HF waves. In long-distance HF radio communications, the radio waves are bounced back and forth between the ionosphere and the Earth’s surface. This means you don’t need to establish a line of sight for HF radio communication. Many applications, such as emergency services and aircraft/maritime surveillance, rely on this mode of HF radio propagation. But this radio communication scheme only works well when there is a reflective E or F layer, and when the absorbing D layer is not dominant. During regular daytime hours, the D layer often becomes a nuisance because it weakens radio wave intensity in the lower HF spectrum. However, by changing to higher frequencies you can regain broken communication links. The D layer may become even more dominant when intense X-ray emissions from solar flares or energetic particles are impacting the atmosphere. The absorbing D layer then breaks any HF communication links that traverse it. Bomb blasts and the ionosphere Nuclear detonations also produce X-ray radiation, which leads to additional ionisation in all layers of the ionosphere. This makes the F layer more reflective to HF radio waves, but, alas, the D layer also becomes more absorptive. This makes it difficult to bounce radio waves off the ionosphere for long-distance communication soon after a nuclear explosion, even though the ionosphere stays intact. Beyond additional ionisation, shock waves from nuclear detonations produce waves and ripples in the upper atmosphere called “atmospheric gravity waves” (AGWs). These waves travel in all directions, even reaching the ionosphere where they cause what are known as “travelling ionospheric disturbances” (TIDs), which can be observed for thousands of kilometres. Other atmospheric disturbances Bomb blasts are not the only things that cause disturbances in the atmosphere. In September 1979, there were reports of bright flashes of light off the South African coast, igniting theories South Africa had nuclear weapon capabilities. Analysis of ionospheric data from the Arecibo Observatory, in Puerto Rico, confirmed the presence of waves in the ionosphere that corroborated the theory of an atmospheric detonation. But whether the detonation was artificial or natural could not be determined. The reason for the ambiguity is that meteor explosions and nuclear detonations in the atmosphere both generate AGWs with similar characteristics. 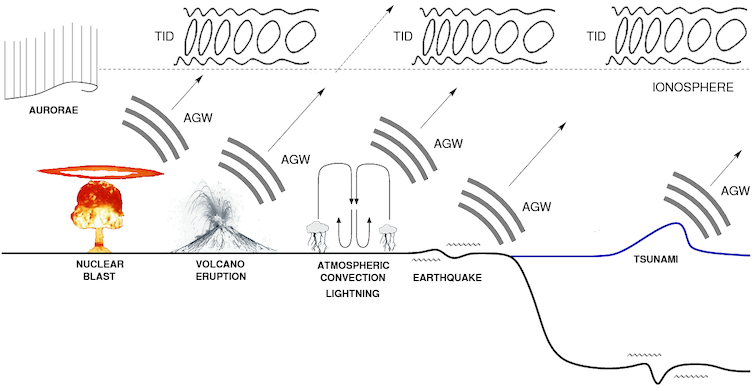 Common sources of atmospheric gravity waves (AGW) that could cause travelling ionospheric disturbances (TID). Rezy Pradipta, Author provided The 2013 Chelyabinsk meteor explosion in Russia generated waves in the ionosphere that were detected all across Europe, and as far away as the United Kingdom. Volcanic eruptions, such at the 1980 Mount St Helens eruption in the US, and large earthquakes, such as the 2011 Tohoku earthquake in Japan, are other examples of energetic processes at the ground impacting the upper atmosphere. Waves observed in the ionosphere above Japan during the 2011 Tohoku earthquake.Another well-known source of ionospheric disturbances is the geomagnetic storm, typically caused by coronal mass ejections from the Sun or solar wind disturbances impacting Earth’s magnetosphere. Satellites as backup In summary, nuclear detonations can impact the upper atmosphere in many ways, as do many other non-nuclear terrestrial and solar events that carry enormous energy. But the damage (so to speak) isn’t permanent. Read more: Climate explained: how volcanoes influence climate and how their emissions compare to what we produce Did the impact of these nuclear tests on the ionosphere specifically lead to the immediate launch of communications satellites? Not directly, because the impacts were temporary. But in the Cold War setting, the potential for adversaries to even briefly interrupt over-the-horizon communications would certainly have been a motivating factor in developing communications satellites as backup.