If Facebook prevented Australian news from being shared on its platform, could the ABC start its own social media service to compensate? While this proposal from the Australia Institute is a worthy one, it’s an impossible ask in the current political climate.

The suggestion is one pillar of the think tank’s new Tech-xit report.

The report canvasses what the Australian government should do if Facebook and Google withdraw their news-related services from Australia, in reaction to the Australian Competition and Consumer Commission’s draft news media bargaining code.

Tech-xit rightly notes the ABC is capable of building social media that doesn’t harvest Australians’ personal data. However, it overlooks the costs and challenges of running a social media service — factors raised in debate over the new code.

Platforms react (badly) to the code

The ACCC’s code is a result of years of research into the effects of platform power on Australian media.

Predictably, the tech companies are not happy. They argue they make far less from news than the ACCC estimates, have greater costs and return more benefit to the media.

If the code becomes law, Facebook has threatened to stop Australian users from sharing local or international news. Google notified Australians its free services would become “at risk”, although it later said it would negotiate if the draft law was changed in its favour.

Facebook’s withdrawal, which the Tech-xit report sees as being likely if the law passes, would reduce Australians’ capacity to share vital news about their communities, activities and businesses.

Read more: If Facebook really pulls news from its Australian sites, we'll have a much less compelling product

ABC to the rescue?

Cue the ABC then, says Jordan Guiao, the report’s author. Guiao is the former head of social media for both the ABC and SBS, and now works at the institute’s Centre for Responsible Technology.

He argues that, if given the funding, ABC Online could reinvent itself to become a “national social platform connecting everyday Australians”. He says all the service would have to do is add

As a trusted information source, he proposes the ABC could enable “genuine exchange and influence on decision making” and “provide real value to local communities starved of civic engagement”.

It’s a bold move to suggest the ABC could start yet another major network when it has just had to cut A$84 million from its budget and lose more than 200 staff.

The institute’s idea is very likely an effort to persuade the Morrison government it should redirect some of that funding back to Aunty, which has a history of digital innovation with ABC Online, iView, Q&A and the like.

However, the government has repeatedly denied it has cut funding to the national broadcaster. It hasn’t provided catch-up emergency broadcasting funds since the ABC covered our worst ever fire season. This doesn’t bode well for a change of mind on future allocations.

The government also excluded the ABC and SBS as beneficiaries of the news media bargaining code negotiations.

The ABC doesn’t even have access to start-up venture capital the way most social media companies do. According to Crunchbase, Twitter and Reddit — the two most popular news-sharing platforms after Facebook — have raised roughly US$1.5 billion and US$550 million respectively in investment rounds, allowing them to constantly innovate in service delivery.

In contrast, over the past decade, ABC Online has had to reduce many of the “social” services it once offered. This is largely due to the cost of moderating online communities and managing user participation. 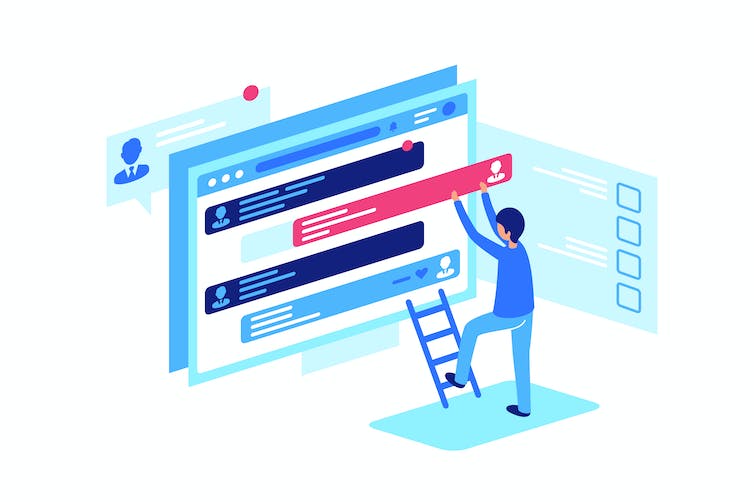 First news comments sections were canned, and online communities such as the Four Corners forums and The Drum website were closed.

Even if the government were to inject millions into an “ABC Social”, it’s unlikely the ABC could deal with the problems of finding and removing illegal content at scale.

It’s an issue that still defeats social media platforms and the ABC does not have machine learning expertise or funds for an army of outsourced moderators.

The move would also expose the ABC to accusations it was crowding out private innovation in the platform space.

It’s unclear whether Facebook will go ahead with its threat of preventing Australian users from sharing news on its platform, given the difficulties with working out exactly who an Australian user is.

If it does, why burden the ABC with the duty to recreate social media? Facebook’s withdrawal could be a boon for Twitter, Reddit and whatever may come next.

In the meantime, if we restored the ABC’s funding, it could develop more inventive ways to share local news online that can’t be threatened by Facebook and Google.

Read more: Latest $84 million cuts rip the heart out of the ABC, and our democracy