We’re at the mid-point of the Queensland election campaign.

Pre-polling opened on Monday, with about two million Queenslanders expected to vote before election day on October 31.

But with just 12 days to go, despite the Liberal-National Party (LNP) opposition stumbling a little more often than the Labor government, neither side has emerged as a clear front-runner. However, the ALP has its nose in front.

Unusually, for a state that produced the likes of Bob Katter, Pauline Hanson and Clive Palmer, the campaign’s first two weeks have been notable only for a low-energy blandness. COVID-19 conditions and too few federal leaders appearing on the hustings have only added to a quiet air of sober austerity.

Fortunately for the Palaszczuk government, flavourless campaigns very often play into the hands of incumbents.

Indeed, it appears the pandemic has been a boon for incumbents everywhere. Between August and last weekend, Labor/Labour governments have been easily re-elected in the Northern Territory, Australian Capital Territory and New Zealand.

Voters, at least for now, appear to view leaders, parties and issues through a unique COVID-19 lens, and give governments free passes on such traditional vote-killers as debt, deficit and unemployment.

Put simply, opposition parties are getting little traction when making the case for change. This phenomenon will not have escaped the attention of federal Opposition Leader Anthony Albanese.

The Queensland opposition’s own lack of traction was confirmed in a weekend Newspoll. 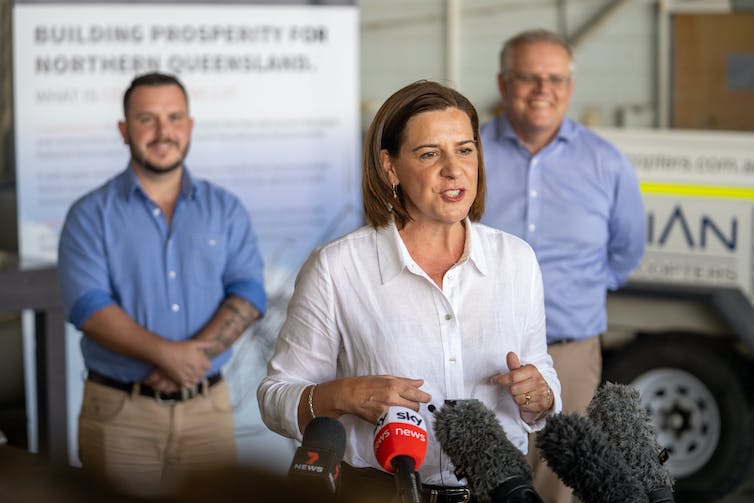 The Liberal National Party is trailing Labor, according to the latest Newspoll. Cameron Laird/ AAP

Currently, Labor and the LNP are evenly pegged in their primary vote at 37%, with Labor enjoying a narrow lead, after preferences, of 52 to 48%. That’s a swing to Labor of about one percentage point since the 2017 state election. If uniform, that swing could see Labor seize three additional LNP seats.

Newspoll also revealed a slightly higher Greens vote, with One Nation’s vote down by about five points since 2017.

That lack of appetite for change has seen something of a role reversal between the major parties.

Where the LNP is spruiking a “vision” via costly infrastructure projects — a $15 billion “New Bradfield” irrigation scheme and a $33 billion Bruce Highway upgrade — Labor is painting itself as the party of steady growth and public safety amid the greatest health crisis in a century.

Read more: Remember Quexit? 5 reasons you should not take your eyes off the Queensland election

Even so, the campaign is firmly aligned with the traditional pillars of Queensland political culture. In the words of political scientist Colin Hughes, this means it is about “things and places rather than people and ideas”.

But a theme of political stability also emerged during the first week. After eight decades of majority government, since the mid-1990s, Queensland has seen three hung parliaments.

Both Premier Annastacia Palaszczuk and LNP leader Deb Frecklington warned of instability being brought about by a vote for minor parties, then pledged “no deals” with crossbench members. Few believed either leader.

The campaign’s second week turned to integrity when the ABC reported Frecklington had been referred by her own party to the Electoral Commission of Queensland after attending a dinner in August hosted by a property developer.

Under 2018 legislation, political donations from property developers are illegal.

Read more: Fundraising questions have interrupted the Queensland LNP's election campaign. What does the law say?

Frecklington denied any wrongdoing. The LNP also denied reporting Frecklington, noting it “regularly communicates with the ECQ to ensure that [they] comply with the act.”

This came as the state’s Crime and Misconduct Commission (CCC) took the unprecedented step of writing to every candidate with a stark warning,

[…] the lines between government and the private sector are blurring, with overlapping networks of association involving consultants, influencers, lobbyists and executives.

Even so, the issue robbed the opposition of a valuable campaign oxygen and made Prime Minister Scott Morrison’s (probably only) visit to Queensland something of a non-event.

That’s why Palaszczuk and Frecklington spent about half of their first two weeks in the regions, where economic pain is so often felt hardest. 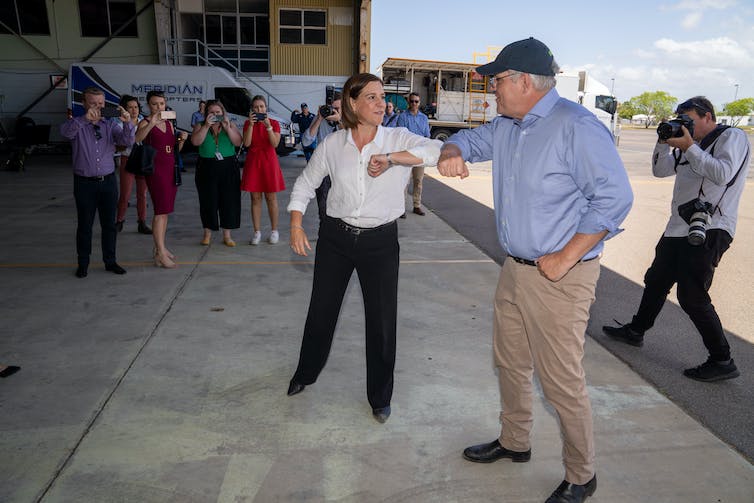 It’s also why the LNP is pledging an unemployment rate of 5% (down from the current 7.7%) and why Labor talked up its enthusiasm for coal mining via the approval of a $1 billion Olive Downs mine near Mackay.

Moreover, while Treasurer Cameron Dick insists Queensland must “borrow to build”, the LNP promises it could balance the budget by by 2024 without new taxes, asset sales or forced redundancies.

In a campaign already marred by vandalised corflutes and nasty tweets, the LNP has pledged to put Labor last on how-to-vote cards. 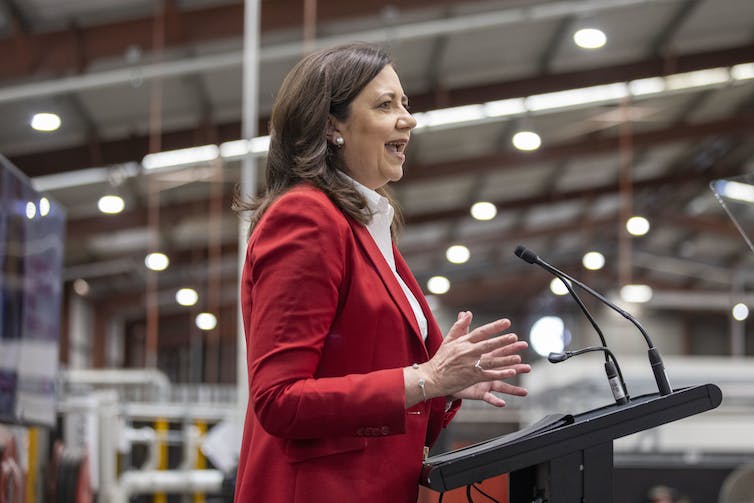 Labor and the LNP both had their campaign launches over the weekend. Glenn Hunt/AAP

It’s a curious strategy that will have an effect only in a small number of seats where the LNP finishes third behind Labor and a minor party or independent. Later, the LNP said it would put the Informed Medical Options Party — an anti-fluoridation, anti-“forced” vaccinations group — last in the 31 seats the IMOP is contesting.

Will pre-poll voting beginning this week, up to 70% of electors could vote before October 31, when postal votes are also considered. This pressure to “front-end” their campaigns saw the major parties bring forward their campaign launches to Sunday, October 18.

Few surprises were offered, although Labor’s long-pledged euthanasia legislation and free TAFE for students under 25 years have generated headlines. The LNP’s $300 car registration rebate and plans for cheaper electricity for 16,000 manufacturing businesses will also provoke interest.

This election is still Labor’s to lose.