There are certain film roles that can define an actor’s career. Ralph Macchio has starred in over 25 films, yet he is most identifiable as the teenage Danny Larouso in The Karate Kid (1984). Similarly, Alex Winter has had a long career as a director and actor, but is best known as high school student Bill S. Preston, Esquire in Bill & Ted’s Excellent Adventure (1989).

The recent popularity and role reprisals by these actors: Winter in Bill & Ted Face the Music (2020) and Macchio in Cobra Kai (2018–), combined with celebrities reading aloud the scripts of old teen film classics via Zoom suggests nostalgia. It is also an opportunity to revisit and consider the nuances of characters and gender roles with greater maturity and a wiser perspective.

Read more: Bill & Ted Face the Music review: party on, dudes - this film is as sweet and daggy as its predecessors

While the young male protagonists in The Karate Kid and Bill & Ted possess purposeful strength, they display a vulnerability, a gentle resilience, a sense of humour with suburban heroism. (Indeed nerd teen archetypes meet tough jocks in detention in 1985’s The Breakfast Club.)

Though he hasn’t had the screen success of his old pal Keanu Reeves, Alex Winter has continued to work in movies. IMDB

Their hero’s journey is relatable yet undeniably epic. The films depict the story of the underdog, of young males who don’t quite fit into the mould and, significantly, are fine with this.

There is a desire to learn, whether from history, as in Bill & Ted, or from older characters sharing their wisdom, as in The Karate Kid. Accordingly, the phrase “wax on, wax off” became popular shorthand for a stern lesson in patience and skill development.

Now, as the characters return to our screens older and in the 21st century, there are still lessons to be learnt.

Rather than entering a mid-life crisis — popularly depicted with older males seeking renewed vigour in the embrace of young mistresses or new sports cars — these middle-aged characters convey the opportunity to relive, redo and revisit past triumphs.

The role reprise is also an opportunity to transform the tribulations of the past. Indeed, Cobra Kai is more focussed on Macchio’s onscreen karate opponent, Johnny Lawrence, played by William Zabka. Now a “deadbeat dad”, Johnny reboots the Cobra Kai dojo and his sense of purpose.

As adult characters, now husbands and fathers, the midlife narrative can navigate an updated definition of masculinity. They may be comeback dudes, but they are also dads. In both the new Bill & Ted movie and the Cobra Kai TV series, the characters’ children have the opportunity to actualise the dreams of their fathers.

Character revivals provide a chance for a ‘do-over’.

Read more: Why do we find it so hard to move on from the 80s?

‘Be excellent’ but it’s also complicated

The 1980s films challenge toxic masculinity. The teen protagonists are undeniably nice, likeable guys who try to do the right thing. Bill and Ted are guided by a moral imperative to “be excellent to each other”.

The famous quote summarises a positive life mantra and shows how good and bad are clearly defined in the original films. The middle aged comeback vehicles show a more mature understanding of the moral complexities of life.

In reprising their roles, the notion that Macchio, Zabka and Winters have aged does not act as a hindrance but a point of identification for Generation X audiences. There is a strong connection to viewers’ own past lives. Seeing the actors again on screen is akin to seeing long lost friends at a high school reunion.

Macchio and Zabka remind us of the high school tensions that are painfully never quite resolved. Seeing Winter with Keanu Reaves’ Ted provides a joyous reminder of the strong bonds of same-sex friendships of our youth. And like a high school reunion there is a lot of reminiscing about the way things were compared to what life is like now.

Turns out everyone got older.

Read more: The new Seachange is a sad case of Zombie TV: when your favourite programs come back from the dead

What about the comeback mothers?

Significantly, there are fewer female role revivals to remind us of the character growth related to womanhood.

Iconic teenage female actors seem more likely to have comebacks in supporting roles as mothers, rather than as the protagonists.

Perhaps the current success of Bill and Ted, and Cobra Kai, could see Molly Ringwald’s iconic role in Sixteen Candles (1984) remade as Fifty-two Candles? Similarly, is it time for an update of Legally Blonde (2001) to Legally Grey? 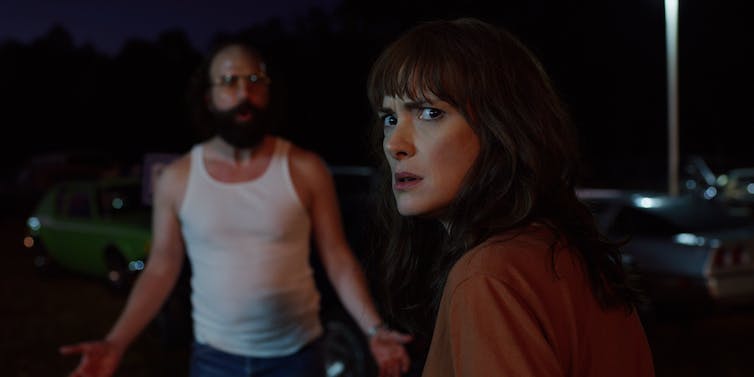 While comeback dads get to fulfill their destinies, comeback mums — like Winona Ryder in Stranger Things — return in a supporting role. Netflix