Making eco-conscious choices at the shops can be tricky when we’re presented with so many options, especially when it comes to milk. Should we buy plant-based milk, or dairy? We’ve looked at the evidence to help you choose.

Dairy has the biggest environmental footprint, by far

Any plant-based milk, be it made from beans, nuts or seeds, has a lighter impact than dairy when it comes to greenhouse gas emissions, as well as the use of water and land. All available studies, including systematic reviews, categorically point this out. 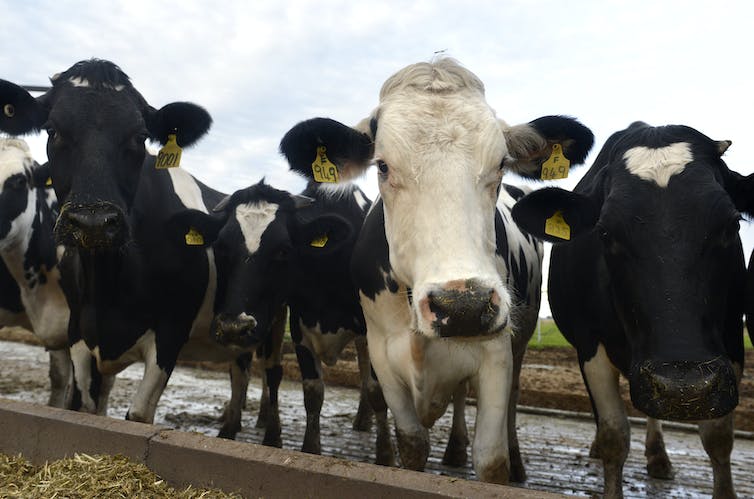 A 2018 study estimates dairy to be around three times more greenhouse gas emission-intensive than plant-based milks.

What’s more, dairy generally requires nine times more land than any of the plant-based alternatives. Every litre of cow’s milk uses 8.9 square metres per year, compared to 0.8 for oat, 0.7 for soy, 0.5 for almond and 0.3 for rice milk.

Milk can be made from almost any nuts, but almond, hazelnut and coconut are proving popular. Not only do nut milks generally require smaller land areas, the trees they grow on absorb carbon and, at the end of their life, produce useful woody biomass.

Still, there are vast differences in the geographical conditions where various nut trees are grown. 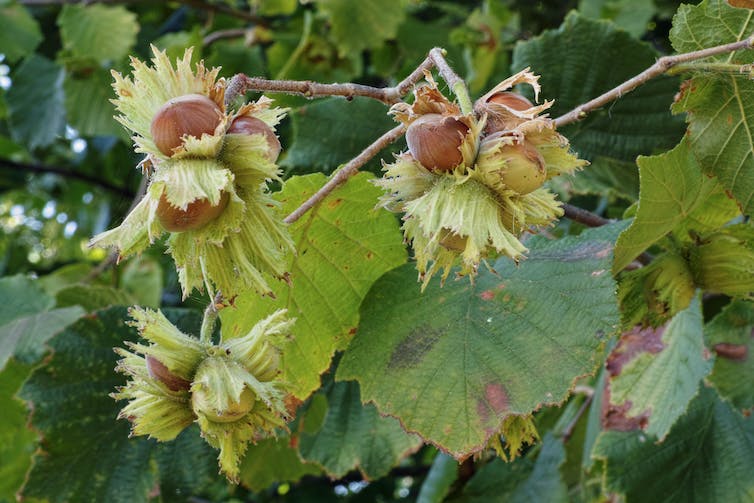 Hazelnuts, and other nuts, grow on trees which require smaller land areas. Shutterstock

California is the largest producer of almond milk in the world, followed by Australia.

Compared to other plant-based milk options, its water use is much higher and largely depends on freshwater irrigation. One kernel of California almond requires 12 litres of water, which raises questions about the industrial production of these nuts in water-scarce areas.

However the biggest environmental concern with almond production in the US is the high mortality of bees, used for tree cross-pollination. This might be because the bees are exposed to pesticides, including glyphosate, and the intensive industrial agriculture which drastically transforms nature’s fragile ecosystems.

In Australia, where almond orchards are smaller-scale and less industrialised, beekeepers do not experience such problems. Still, millions of bees are needed, and fires, drought, floods, smoke and heat damage can threaten their health.

Generally, the environmental performance of coconut milk is good – coconut trees use small amounts of water and absorb carbon dioxide.

Yet as coconuts are grown only in tropical areas, the industrial production of this milk can destroy wildlife habitat. Increasing global demand for coconut milk is likely to put further pressure on the environment and wildlife, and deepen these conflicts.

Hazelnut is a better option for the environment as the trees are cross-pollinated by wind which carries airborne dry pollen between neighbouring plants, not bees.

Hazelnuts also grow in areas with higher rainfall around the Black Sea, Southern Europe and in North America, demanding much less water than almond trees.

Hazelnut milk is already commercially available and although its demand and production are rising, the cultivation of the bush trees is not yet subjected to intensive large-scale operations.

Soy milk has been used for millennia in China and has already an established presence in the West, but the hemp alternative is relatively new. 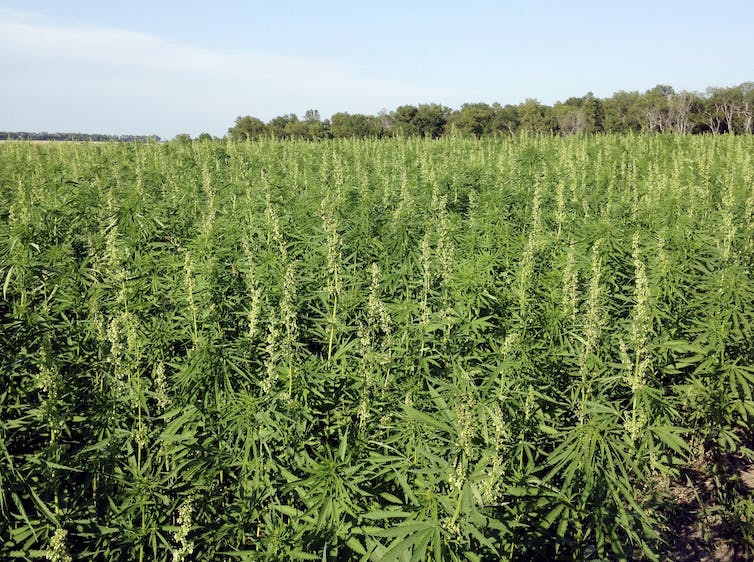 Industrial hemp growing in a field in North Dakota. North Dakota Department of Agriculture via AP

All legumes are nitrogen fixing. This means the bacteria in plant tissue produce nitrogen, which improves soil fertility and reduces the need for fertilisers. Legumes are also water-efficient, particularly when compared with almonds and dairy.

The US and Brazil are the biggest suppliers of soybeans, and the plant is very versatile when it comes to its commercial uses, with a large share of the beans used as livestock feed.

Read more: Soy versus dairy: what's the footprint of milk?

However, a major environmental concern is the need to clear and convert large swathes of native vegetation to grow soybeans. An overall reduction in the demand for meat and animal-based foods could potentially decrease the need to produce large amounts of soybeans for animal feed, but we’re yet to witness such changes.

The environmental benefits of hemp milk make it a game-changer.

Its seeds are processed for oil and milk, but the plant itself is very versatile — all its parts can be used as construction material, textile fibres, pulp and paper or hemp-based plastics.

Its roots grow deep, which improves the soil structure and reduces the presence of fungi. It’s also resistant to diseases, and it produces a lot of shade, which supresses the growth of weeds. This, in turn, cuts down the need for herbicides and pesticides.

Hemp requires more water than soy, but less than almond and dairy. Despite being one of the oldest crops used, particularly in Europe, hemp is produced in very low quantities.

We can produce plant-based milk from almost any grains, but rice and oat are proving popular. However, they require more land compared with nut milks.

Rice milk has a big water footprint. More notably, it’s associated with higher greenhouse gas emissions compared to the other plant-based options because methane-producing bacteria develop in the rice paddies.

In some cases, rice milk may contain unacceptable levels of arsenic. And applying fertilisers to boost yields can pollute nearby waterways.

Read more: Are we eating too much arsenic? We need better tests to know

Oat milk has been becoming increasingly popular around the world because of its overall environmental benefits.

But similar to soy, the bulk of oat production is used for livestock feed and any reduction in the demand for animal-based foods would decrease the pressure on this plant.

Currently grown in Canada and the US, most oat operations are large-scale monoculture, which means it’s the only type of crop grown in a large area. This practice depletes the soil’s fertility, limits the diversity of insects and increases the risk of diseases and pest infection. 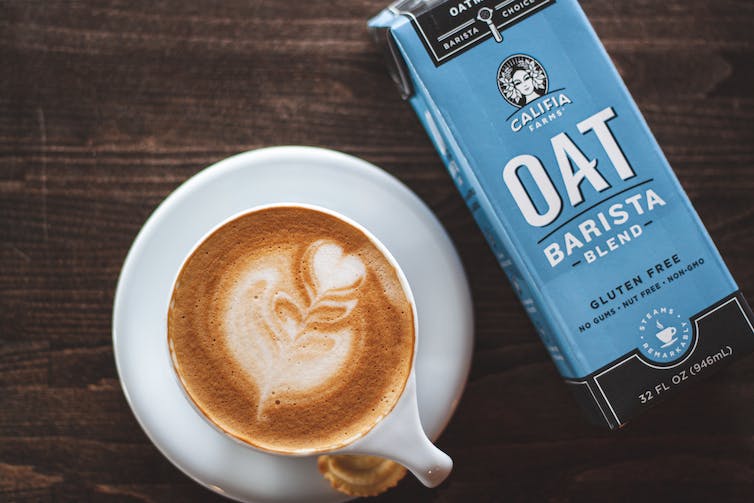 Oats are also typically grown with glyphosate-based pesticides, which tarnishes its environmental credentials because it can cause glyphosate-resistant plant, animal and insect pathogens to proliferate.

The final message: diversify your choices

Organic versions of all these plant-based milks are better for the environment because they use, for example, fewer chemical fertilisers, they’re free from pesticides and herbicides, and they put less pressure on the soils. Any additives, be it fortifiers, such as calcium or vitamins, flavours or additional ingredients, such as sugar, coffee or chocolate, should be taken into account separately.

Packaging is also very important to consider. Packaging contributes 45% of the global warming potential of California’s almond milk. And it’s worth keeping in mind that wasting milk has a much bigger environmental footprint, and questions the ethics of how humans exploit the animal world.

Read more: Recycling is not enough. Zero-packaging stores show we can kick our plastic addiction

If, as a consumer you are trying to reduce the environmental footprint of the milk you drink, the first message is you should avoid dairy and replace it with plant-based options.

The second message is it’s better to diversify the plant-based milks we use. Shifting to only one option, even if it’s the most environmentally friendly one for the time being, means the market demand may potentially become overexploited.