An astronomical discovery is shedding new light on an exquisitely-formed star system in our own Milky Way galaxy, featuring two Wolf-Rayet stars. These stars are short-lived and consequently very rare, with only a few hundred confirmed among our galaxy’s one hundred billion or so stars.

Research published by our team in the Monthly Notices of the Royal Astronomical Society offers a closer look at not one, but two Wolf-Rayet stars, in a binary star system named Apep, about 8000 light years away from Earth.

Wolf-Rayets are often more than 20 times the mass of our sun. They’re fiercely hot, bright and can emit more radiation than a million normal stars. In fact, they’re so luminous they fly apart under their own glare — shedding huge amounts of mass through intense stellar winds and driving elements such as helium, oxygen and carbon into space.

Apep, named after the serpentine Egyptian god of chaos, was first announced by my team in 2018. With the new findings from a paper led by recent University of Sydney graduate from my group, Yinuo Han, we threw everything we had at the seemingly inexplicable physics driving this exotic peacock of the stellar kingdom.

Finding any Wolf-Rayet star is a one-in-a-billion event, only possible because their extreme properties act as a beacon visible across the galaxy. In Apep, we find a pair of these rare stars nestled in an orbit, the only example of a binary Wolf-Rayet ever verified.

Their ferocious radiation drives the outer layers of the star off into space, where the material, particularly the carbon, is able to cool and condense into a plume of grains — forming a literal pillar of stardust.

Read more: Experts solve the mystery of a giant X-shaped galaxy, with a monster black hole as its engine

In the case of the binary star Apep, however, as the two stars orbit one another, this dust gets twisted and sculpted into a vast glowing sooty tail. Both the geometric form and the motion of this dust encodes the physics of the star’s orbit, as well as the speed of winds.

Using high-resolution imaging techniques, we revealed the form of the glowing plume. By returning to Apep for three consecutive years, subtle differences could be seen in the motion of the dust tail.

Despite the vast distance over which we observed the system, the incredible power of modern telescopes and imaging technologies allowed us to capture Apep’s dance.

A potential first for our Milky Way?

Analysing these data, we produced and a model that matches Apep’s intricate spiral geometry in amazing detail. However the increasing clarity of the imagery only served to double down on the underlying enigma enshrouding the system.

Flouting rules that generally govern other wind-driven dust plumes, Apep’s dust tail seemed to float along at its own slow pace, in open defiance to the the extreme winds that should be driving it. This was hard to fathom, as Wolf-Rayet winds are more than a billion times more powerful than our own solar wind. 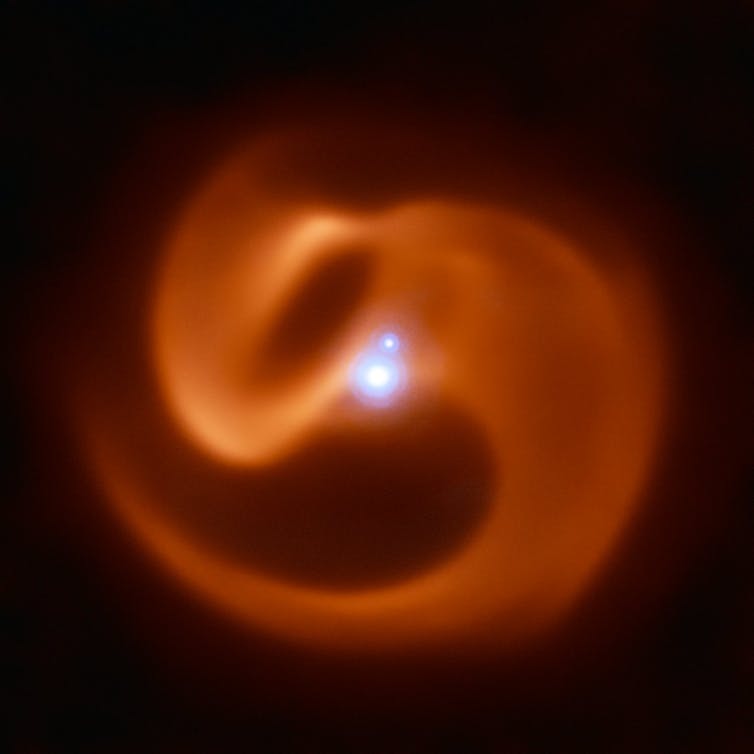 Wolf-Rayet stars have some of the strongest known winds in the galaxy. European Southern Observatory, CC BY

After double-checking for possible errors, we were forced to accept the dust spiral was, indeed, expanding four times slower than the measured stellar winds. And so, we were confronted with something unheard of in other Wolf-Rayet double star systems; something requiring new physics to understand.

The only explanation that remained was that Apep’s plume was somehow sheltered within its own, more gentle wind. This two-speed model of wind is is theoretically possible if the star that launches the wind has a peculiar property: rapid rotation.

If it’s spinning very fast on its axis, it’s possible this could launch a slow wind in one direction, say around the equator, while maintaining a fast wind closer to the poles.

This opens the door into a realm of fascinating physics that has only been glimpsed by astronomers before.

Wolf-Rayet stars are, by definition, at the end of their life cycle. In perhaps only a few tens of thousands of years — nobody knows exactly when —they’re destined to explode as supernova, releasing a titanic amount of energy and matter into the galaxy and leaving a remnant black hole or neutron star.

It’s here the critical issue of the star’s rapid rotation comes to centre stage. A normal supernova carries few impacts and consequences beyond its immediate stellar neighbourhood. But when the precursor star is a rapid rotator, this can tip the physics into a different domain entirely: that of a gamma-ray burst.

Here, bursts of raw fury erupt from the rotational poles with such violence they are visible clean across the observable universe.

Being extremely rare, gamma-ray bursts have never been observed in our galaxy. Calculations imply a direct strike from such an intense burst of radiation, even at a considerable distance off in the deeps of the galaxy, could have real consequences for life here on Earth.

It might cause a range of problems, such as ozone depletion and acid rain. Some studies argue such a strike may have caused the Ordovician–Silurian extinction event in the fossil record — the second-largest (percentage wise) of Earth’s five major extinction events.

Read more: Solving the mystery of the wimpy supernova

Fortunately for us, in the case of Apep, we’re definitely not in the firing line. If a gamma-ray strike were to be generated, it would be pointed harmlessly off in a direction away from Earth.

If the link to a gamma-ray burst progenitor can be firmly established, this would capture an elusive phenomena formerly only known at cosmological distances. Either way, the future for studies of this system are bright indeed.