This is a case of free will. Clearly it’s not a momentous case. Nothing much depends on whether you move your finger.

But imagine if something did. Imagine someone would be executed if you did move that finger. Then you’d be morally responsible, because you did it freely. 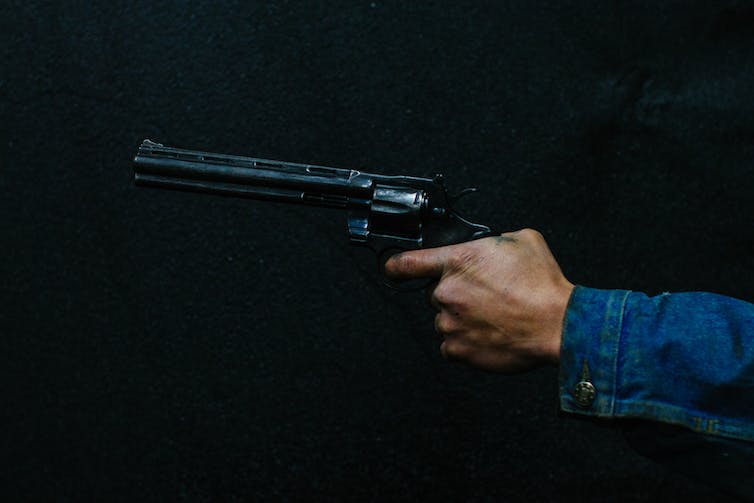 If you freely choose to move your finger, knowing someone would be executed as a result, you would be morally culpable. Alejo Reinoso/Unsplash, CC BY

It seems as obvious as anything that we have free will. But lots of philosophers and scientists will tell you free will doesn’t exist.

The starting point of this argument is that free will is incompatible with determinism, a worldview that dominated science in the past and remains influential today.

Determinism says everything that happens now is entirely determined by factors that were in place well before you were even born.

Maybe these factors concern your upbringing or culture. Or they concern the initial conditions of the Universe and the laws that govern how it unfolds. Either way, you had nothing to do with them. And if they determine what you do, you aren’t free.

US philosopher Peter van Inwagen provides a vivid illustration of this argument, in his book An Essay on Free Will. If determinism is true, the laws of nature and the past together guarantee you will move your finger. It therefore follows that if you have the power not to move your finger, you would also have the power to change the laws or the past.

But that’s ridiculous. You don’t have such powers.

An initial reaction is that, while determinism was important historically, it now seems false.

Quantum physics shows the occurrence of some events to be literally random. It’s a concept the Australian National University used to develop a random number generator.

Unfortunately, this only makes matters worse. If moving your finger were just a random act, you wouldn’t be responsible for it and so you still wouldn’t be free.

This gives us the full-blown argument against free will. Either determinism is true or it’s not; that’s just logic.

If determinism is true, your acts are a consequence of things that happened before you were born; so you have no free will. But suppose determinism is not true; then it’s easy to think everything would be random, including all your actions (such as raising your finger!). But in this instance, there would be no free will either.

You might side with British philosopher Galen Strawson who, in his book Things That Bother Me, argues free will is “provably impossible”.

Is there a middle ground?

Another option is to try to understand free will so it works with a limited form of determinism, that applies to your actions rather than to everything in the world.

One version of this view, developed by ANU’s Victoria McGeer, involves defining free will as whatever explains our social capacities to hold each other morally responsible. As a deterministic process could in principle do that, free will and determinism may coexist.

But while a deterministic process may explain these capacities, it would not in that case be free will, because free will is fundamentally incompatible with determinism.

At this point, things look bleak. But there is a small ray of light, pointed out by US linguist and philosopher Noam Chomsky, who says:

We just can’t abandon believing it (free will); it’s our most immediate phenomenologically obvious impression, but we can’t explain it. […] If it’s something we know to be true and we don’t have any explanation for it, well, too bad for any explanatory possibilities.

Noam Chomsky on free will.

Suppose again that determinism is incompatible with free will. If so, when you freely moved your finger, that event was not fully determined by the initial conditions of the Universe and the laws of nature.

Does it necessarily follow that it’s random? On the face of it, no. To be random is one thing; to be not fully determined is quite another. There’s a logical space between determinism and randomness, and perhaps free will lives in that space.

Chomsky goes on to say it may be impossible for humans to understand free will. In science, people develop models or theories of the systems they are interested in. He suggests in his book Language and Problems of Knowledge the only models we can understand are those in which our acts are either determined or random. If so, we will never develop scientific models of free will, for it is neither of these things.

I am not sure Chomsky is right about the limits of human understanding. But I think he’s right about free will. We are free to move our finger. That is neither determined nor random — it’s a choice we can feel in our bones.