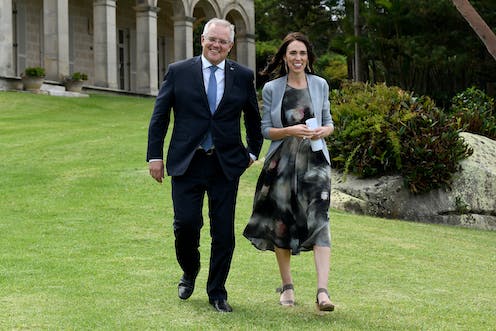 The first stage of a trans-Tasman travel bubble will start from October 16. But it will only be one-way – from New Zealand – and to limited parts of Australia.

Deputy Prime Minister Michael McCormack announced on Friday that people from New Zealand who hadn’t been in a COVID “hotspot” for a fortnight will be allowed into NSW and the Northern Territory without quarantining.

The hot spot definition is the one adopted by the federal government.

It uses a three-day rolling average of three locally acquired cases per day, over three days. Prime Minister Scott Morrison was not able to get this definition accepted by all participants at national cabinet some weeks ago.

States and territories wanting to receive travellers from New Zealand have to agree to the hotspot definition.

Under the definition there are currently no COVID-19 hotspots in New Zealand.

McCormack indicated South Australia was likely to be the next state to receive people from New Zealand without quarantine. It has had some issue with the hotspot definition.

There is no indication when New Zealand will accept people from Australia.

McCormack said the establishment of quarantine free travel would free up space to allow more Australians to return home. It would allow an additional 325 passengers a week to enter quarantine in Sydney,

He said if Queensland were to accept the hotspot definition another 250 quarantine places could be freed up.

Apart from tourists, the government hopes the limited opening will see shearers and other agricultural workers come to Australia, Orchardists have been appealing for pickers.

“The decision for us is safety. In our view, we are not ready to have quarantine-free travel with Australia. They have a very different strategy than us.”

She added “I do encourage Kiwis to think about spending their money here locally.”