The merge will allow shared messaging across both platforms, as well as video calls and the use of a range of tools drawn from both platforms. It’s currently being rolled out across countries on an opt-in basis, but hasn’t yet reached Australia.

At the crux of this was the goal to administer end-to-end encryption across the whole messaging “ecosystem”.

Ostensibly, this was part of Facebook’s renewed focus on privacy, in the wake of several highly publicised scandals. Most notable was its poor data protection that allowed political consulting firm Cambridge Analytica to steal data from 87 million Facebook accounts and use it to target users with political ads ahead of the 2016 US presidential election.

… one out of three people sometimes find it difficult to remember where to find a certain conversation thread. With this update, it will be even easier to stay connected without thinking about which app to use to reach your friends and family.

While that may seem harmless, it’s likely Facebook is actually attempting to make its apps inseparable, ahead of a potential anti-trust lawsuit in the US that may try to see the company sell Instagram and WhatsApp.

The Messenger/Instagram Direct merge will extend to features rolled out during the pandemic, such as the “Watch Together” tool for Messenger. As the name suggests, this lets users watch videos together in real time. Now, both Messenger and Instagram users will be able to use it, regardless of which app they’re on.

For example, in the new merged messaging ecosystem, a user you previously blocked on Messenger won’t automatically be blocked on Instagram. Thus, the blocked person will be able to once again contact you. This could open doors to a plethora of unexpected online abuse.

Why this is good for Mark Zuckerberg

This first step – and Facebook’s full roadmap for the encrypted integration of WhatsApp, Instagram Direct and Messenger – has three clear outcomes.

Firstly, end-to-end encryption means Facebook will have complete deniability for anything that travels across its messaging tools.

It won’t be able to “see” the messages. While this might be good from a user privacy perspective, it also means anything from bullying, to scams, to illegal drug sales, to paedophilia can’t be policed if it happens via these tools.

Read more: Facebook's push for end-to-end encryption is good news for user privacy, as well as terrorists and paedophiles

This would stop Facebook being blamed for hurtful or illegal uses of its services. As far as moderating the platform goes, Facebook would effectively become “invisible” (not to mention moderation is expensive and complicated).

This is all great news for Mark Zuckerberg, especially as Facebook stares down the barrel of potential anti-trust litigation. 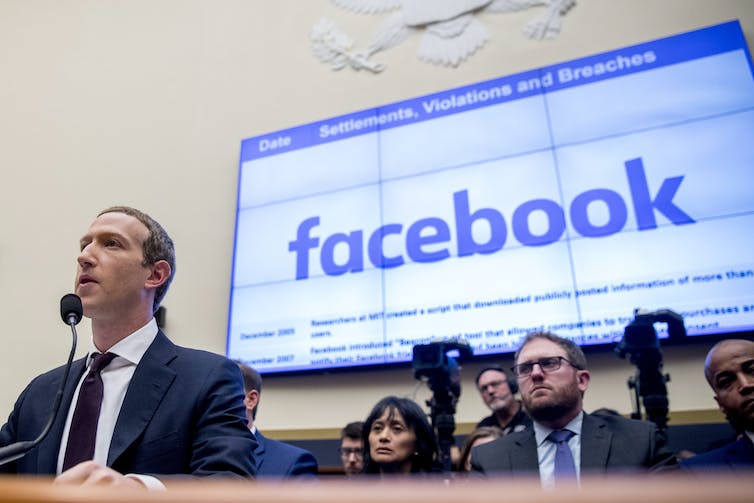 The US Federal Trade Commission has been investigating Facebook for more than a year over whether it is harming competition. A Bloomberg report from last month said competition enforcers were preparing a possible anti-trust lawsuit against the company. Andrew Harnik/AP

Secondly, once the apps are merged, functionally they will no longer be separate platforms. They will still exist as separate apps with some separate features, but the vast amount of personal data underpinning them will live in one giant, shared database.

Deeper data integration will let Facebook know users more intimately. Moreover, it will be able to leverage this new insight to target users with more advertising and expand further.

Finally, and perhaps most concerning, is that by integrating its apps Facebook could legitimately respond to anti-trust lawsuits by saying it can’t separate Instagram or WhatsApp from the main Facebook platform – because they’re the same thing now.

And if they can’t be separated, there’s no way Facebook could sell Instagram or WhatsApp, even if it wanted to.

The messaging traffic across Facebook’s platforms is vast, with more than 100 billion messages sent daily. And this has only increased during the COVID-19 pandemic.

With the sheer size of its user database, Facebook continues to either purchase, or squash, its competition. Concerns about the company being a monopoly aren’t without merit.

Researchers and founding Facebook employees have called to have the company split up – and for Instagram and Whatsapp to become separate again.

Just a few months ago, Facebook released its Instagram-housed tool Reels which bears a striking resemblance to TikTok, another social app sweeping the globe.

It seems this is just another example of Facebook trying to use the sheer size of its network to stifle growing competition, aided (perhaps unwittingly) by Donald Trump’s anti-China sentiment.

If competition is important to encouraging innovation and diversity, then the newest development from Facebook discourages both these things. It further entrenches Facebook and its services into the lives of consumers, making it harder to pull away. And this certainly isn’t far from monopolistic behaviour.

Read more: Trump's TikTok deal explained: who is Oracle? Why Walmart? And what does it mean for our data?