Theatre is back in Sydney after the COVID–induced hiatus decimated the cultural life of the city. Wonnangatta begins with socially distanced seating, temperature checks on arrival and mandated masks for all audience members.

The smaller audience and lack of socialising before the production make for a less joyous return to live theatre than may be expected. But this sets a strangely appropriate tone for Angus Cerini’s gripping new play about murder, revenge and the unsettling power of the Australian bush.

Cerini draws inspiration from events that still circulate in East Gippsland community memory, the Wonnangatta murders: deaths that rocked the region in the summer of 1917/18 and for which there remains no explanation. Like many Australian stories before it, Wonnangatta asks unsettling questions about the relationship between settler Australians and the country they claim to possess.

Cerini rehearses our wonders and fears about these landscapes, and prompts disturbing questions about their power to transform us.

The play opens with two friends standing in spotlight. Disturbing sounds of nocturnal birds and animals echo through the theatre. The sparse set evokes both the texture of eucalyptus bark and the panelling of a bush hut. We are clearly in the psychic underbelly of the settler imaginary - a place where men can easily lose their bearings and come apart at the seams.

Riggall (Wayne Blair) and Harry (Hugo Weaving) have discovered the half buried and mangled body of Harry’s friend, Jim Barclay, at Wonnangatta cattle station. For the next 90 minutes, the audience is gripped by their account of moving through the Victorian high country in an attempt to unravel this mystery.

The men barely move on stage as they speculate about the events that have taken place. A step to the left here or a gaze to the right there indicates their movement around the station, and then on horseback up into the high country. Never before have I noticed the shift of body weight from one foot to another so keenly. 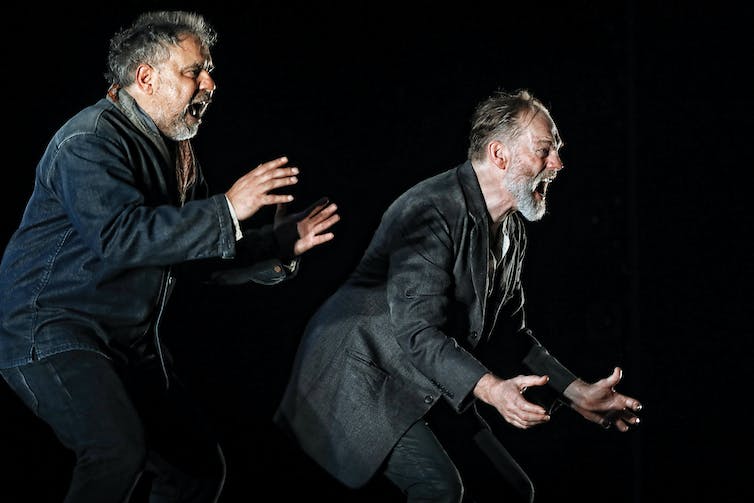 ‘Never before have I noticed the shift of body weight from one foot to another so keenly.’ Prudence Upton/Sydney Theatre Company

Blair and Weaving are at the peak of their powers. Blair embodies the anxieties of Riggall in subtle tics and bodily shakes. Weaving’s transformations from grief to anger to fear are shaded by minute changes in bodily comportment and voice; at one point his throat seems to pincer the words as they came out of his mouth.

Indigeneity in the Australian gothic

Wonnangatta is part of a long lineage of gothic Australian stories about the capacity of the wilderness to disturb and unsettle.

This is not the Australian imaginary of heroic exploration, possession and stoic men turning these landscapes into productive wellsprings of settler wealth. These men are in the Victorian high country, “two days ride from anywhere” as Harry repeatedly observes, a place where they might not, in fact, belong.

Read more: Australian Gothic: from Hanging Rock to Nick Cave and Kylie, this genre explores our dark side

There are multiple histories evoked in this story: the Wonnangatta murders, but also the period 50 years before, when “explorers” moved through this country, naming the landscape in ways that recorded their fears and despairs.

As Harry navigates the high country, he recounts the names of the surrounding mountains: Mount Speculation, Mount Buggery, Mount Disappointment. This is an archive of settler unease and distress in the landscape. The feelings precede Harry and Riggall’s journey, and will continue long after it.

Perhaps because the play evoked these explorations, I was left wondering about the casting of Blair as Riggall. 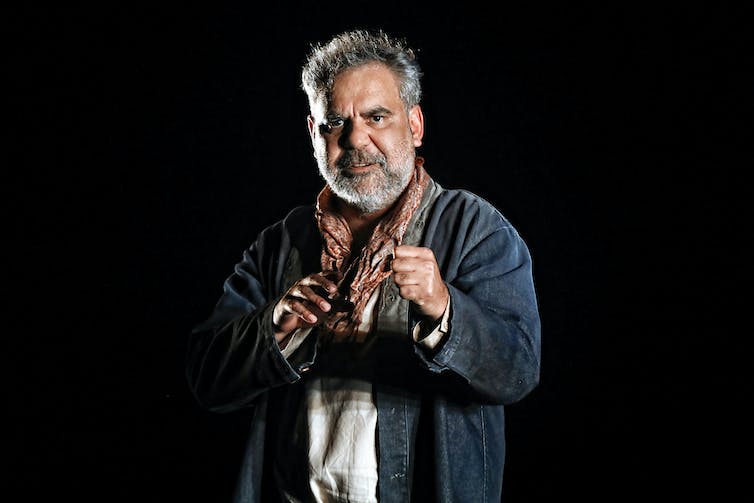 The play itself makes no reference to Riggall’s Indigeneity, and, less at home in this landscape than Harry, he is not offered as a counterpoint to settler alienation.

Was this an invocation of these earlier moments when Indigenous guides enabled settler exploration? Alfred Howitt, who named so many of these mountains, depended entirely on this Indigenous knowledge to navigate the high country.

In a play that pivots on questions about settler belonging and possession, it was unclear to me what place was being imagined for Indigeneity in this world.

The power of words

Most importantly, though, this play is a world of words – a world made through their power, their rhythms and their humour. Moving freely between conversation, description, verse and what sounds like free association, Cerini serves a form of Australian-English to his audience like a rich, long meal. There were moments when I gasped from the beauty of his phrases. 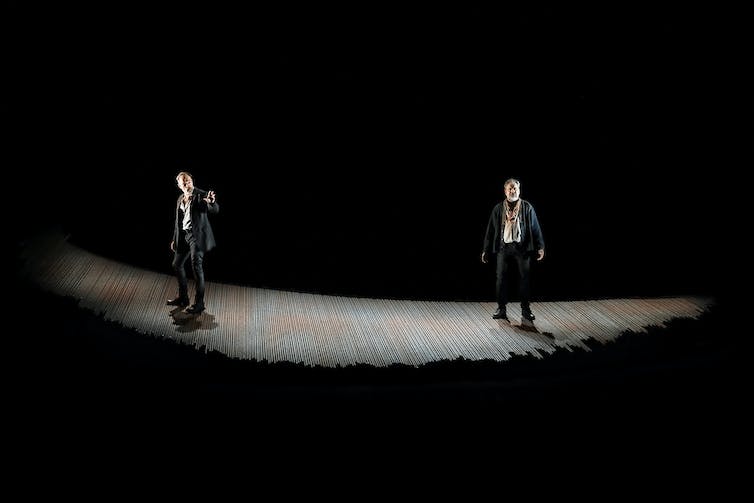 I’ve walked across the ridge these characters describe, in conditions like those they face. Never have I been able to quite recapture the terror and awe I felt walking across a path of less than a meter wide on loose wet stones, peering down the sharp descent either side into cloud covered gorges below.

Cerini’s poetic cacophony took me back to that terrifying moment – and I suspect others without my first hand experience would be similarly transported.

Released from the limitations of the literal and of realism, Wonnangatta is a welcome reminder of the power of words to affect and unsettle. This is Australian writing at its provocative and powerful best.

Wonnangatta plays at the Roslyn Packer Theatre until October 31.