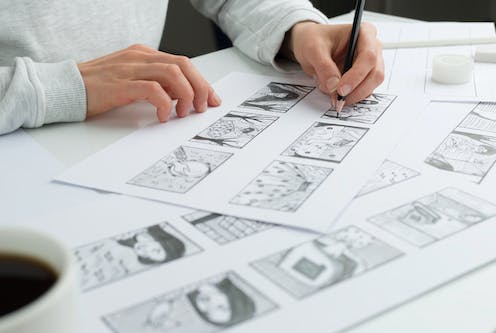 Images are all around us. But what about the images you may never have seen, which influence the storytelling you watch every day?

Developed at Disney Animation Studios in the 1930’s, it was first used in live action film for Gone with the Wind (1939). As film critic Fionnuala Halligan has written:

The unsung heroes of film, storyboard artists are the first to give vision to a screenplay, translating words on the page into shots for the screen.

Art of the plan

An applied use of drawing, storyboarding is an illustrative art that communicates context.

Legendary director Ridley Scott always begins his films with the drawing board, using the pencil to inform the visual tone of his direction and discuss scenes with actors.

It limits the potential of the story and script, defining a scene visually to reduce the shooting of excess scenes.

Traditionally each cell — or film frame in the narrative — is drawn by hand, artists rapidly refining the story. Large amounts of sketches are discarded. Small thumbnail sketches are reworked until the drawings move to final polished boards.

Storyboards often collect in archives, unreleased works bound by studio copyright. They are occasionally collated in book form, as in The Art of Movie Storyboards: Visualising the Action of the World’s Greatest Films.

Although pencil is still predominant, many artists now employ digital approaches. Storyboards don’t require the artist to embed lots of detail. The focus is how the boards communicate the camera angle, movement, timing, gesture and staging of characters.

Some artists produce mock sequences to get employed. Heidi Jo Gilbert’s mock sequence landed her a job at DreamWorks Animation.

Each panel or frame represents what the camera and eventually the audience will see. The shape of the rectangle is usually based on the planned shooting aspect ratio (width to height of frame).

Storyboards can help the cinematographer make choices about lighting, depth of field, locations and camera angles. Arrows indicate where the movement of the character or object is headed. Although the script is important for direction and dialogue, storyboards become a visual script.

Not only do they need the drawing skills — whether pencil or pixel, but they need to be able to negotiate visual observation, visual representation, metaphor, allegory and aesthetics.

Being highly skilled in realism is not necessary, communicating the idea of story is the most important. In fact, something realistic may not best communicate meaning.

Some key drawing conventions and features include:

Storyboards allow artists like Aaron Blaise to embed emotion, gesture and movement into a scene.

This artistic process helps the director make choices. The panels of the storyboard are propped up against a wall or shown onscreen during production. Members of the production crew refer to them to discuss and see where the visual narrative will lead.

Read more: Long days, heavy loads: what the best boy does on a film set

Storyboards are a great way for people working together to visualise their ideas and brainstorm new ones. It’s fascinating to see how simple line drawings can spark and move through to the final idea. Here is an example of the storyboard side-by-side with the final product from UP (2009).

What’s evident is a honed approach to drawing skills still playing a role in creating the film’s visual direction.

These days not all film directors employ this technique. But many in the creative industries still start with the drawing board as a source of communicating concepts, ideas and story.

Like a compass steering a ship, drawings were probably the starting point for your favourite show or movie.