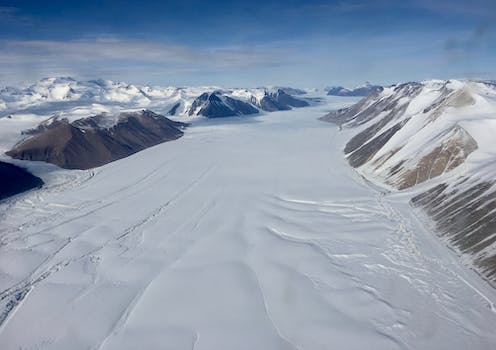 CC BY-ND Climate Explained is a collaboration between The Conversation, Stuff and the New Zealand Science Media Centre to answer your questions about climate change. If you have a question you’d like an expert to answer, please send it to climate.change@stuff.co.nz How much climate variability have humans dealt with since we evolved and since we started settling (Neolithic times)? How important was migration to human survival during these periods? The climate always fluctuates as variation in the Sun’s heat reaching Earth drives glacial-interglacial cycles. Over the past 420,000 years there have been at least four major transitions between ice ages and relatively warmer interglacial periods. Modern humans emigrated from Africa to populate the rest of the globe between 120,000 and 80,000 years ago, which means our species has had to adapt to many massive climate transitions. Warming and cooling The Last Interglacial 129,000–116,000 years ago was a period of intense global warming (from around 2℃ higher than today to as much as 11℃ higher in the Arctic), leading to a large reduction of the Arctic, Greenland and Antarctic ice sheets, and a 6–9m rise in sea level. 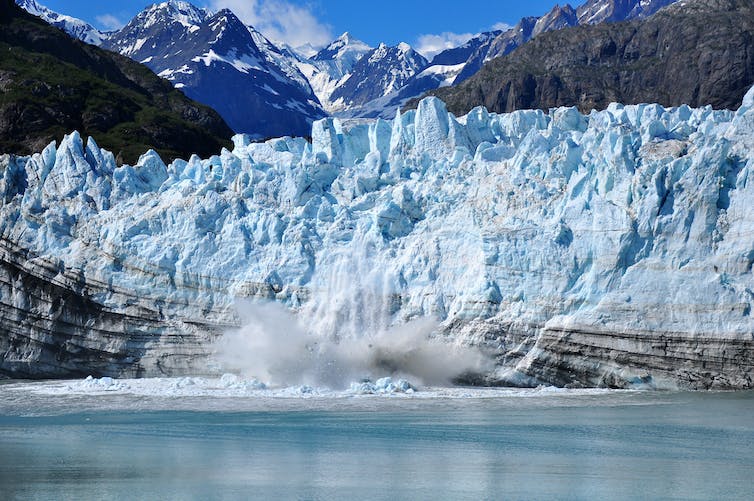 Arctic glaciers have melted before. Flickr/Kimberly Vardeman, CC BY The Last Glacial Maximum from 26,500–19,000 years ago coincided with a large drop in atmospheric CO₂ and a 4.3℃ cooling globally. Read more: Climate explained: will the tropics eventually become uninhabitable? Low temperatures turned much of the world’s water into ice and expanded glaciers. This lowered sea level by up to 130m compared to today. This exposed continental shelves, joined land masses and created extensive coastal plains, such as Beringia that connected Russia to North America, and Sahul that connected Australia to New Guinea. After a brief warming period, the Northern Hemisphere returned abruptly to near-glacial conditions around 12,900 years ago that lasted 1,300 years. Known as the Younger Dryas, this period recorded climate cooling up to 15℃ and giant ice sheets again advanced. The end of the Younger Dryas was just as sudden, marked by a rapid warming up to 10℃ in few decades. The most recent period of climate instability was the transition from the Medieval Warm Period to the Little Ice Age. Cold conditions between 1580 and 1880 were characterised by a 0.5–4℃ cooling and expanding mountain glaciers in the European Alps, New Zealand, Alaska and the Andes. 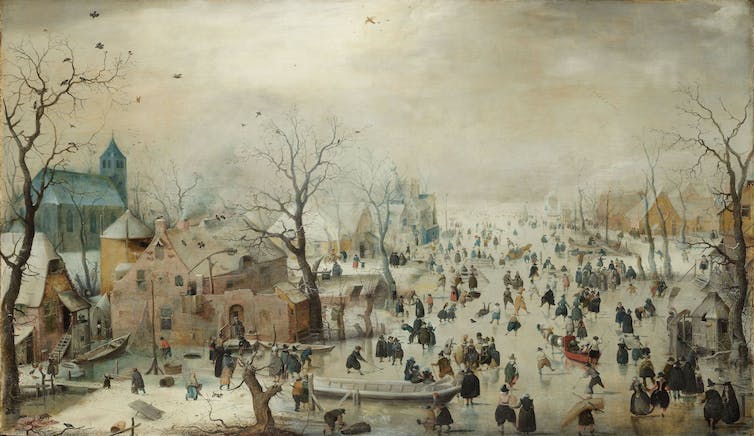 Winter Landscape with Skaters by Hendrick Avercamp in 1608 is one of many artworks that depict the cold winter weather during the Little Ice Age. Wikimedia/Rijksmuseum Amsterdam What climate change meant for humans Despite our impressive capacity to adapt to a broad range of environments, humans have a preferred environmental envelope in which we thrive. These conditions would have been characterised by a mix of open, savanna-type woodlands, wetlands and rocky habitats. Dense, humid rain forests made access to resources difficult, whereas deserts were often too dry to provide enough food and materials. Climate conditions during the Last Interglacial could have encouraged waves of human expansion out of Africa when a humid and warm climate promoted vegetated corridors through Eurasia. The subsequent cooling period connected land masses that had previously been separated by oceans and provided opportunities for human travellers to access Sahul from the Indonesian archipelago. Read more: An incredible journey: the first people to arrive in Australia came in large numbers, and on purpose The entrance into America from Asia via Beringia was more difficult because humans only reached there during the Last Glacial Maximum when a massive ice sheet blocked the new land bridge. During that time, human populations declined and contracted to small refuges until the climate in eastern Beringia began to warm again 17,000–15,000 years ago. This warming created newly accessible pathways along the Pacific Northwest coast, followed by another ice-free corridor that formed 3,000 years later as the ice sheet retreated. The need for food Because of the cold temperatures and scarcity of food at this time, humans needed to improve their hunting efficiency by targeting large animals to maximise food return. In the Southern Hemisphere, modern humans had already been living in Australia for 30,000–40,000 years prior to the Last Glacial Maximum, so such drastic cooling and drying probably pushed human populations to decline and retreat into smaller refuges nearer to reliable sources of fresh water where game animals also gathered. Read more: Did people or climate kill off the megafauna? Actually, it was both Following the Last Glacial Maximum, modern humans continued to spread across North America. The warmer and wetter climate in the Southern Hemisphere also helped human migration into South America. At the same time the Younger Dryas in the Northern Hemisphere forced populations either to return to a nomadic lifestyle or seek refuge in a few hospitable areas. After the harsh conditions of the Younger Dryas, the first evidence of agriculture emerged in various parts of the world. The peopling of remote Oceania between 3,500 and 730 years ago required oceanic journeys of thousands of kilometres across the Pacific, eventually to the temperate and subantarctic waters of New Zealand. 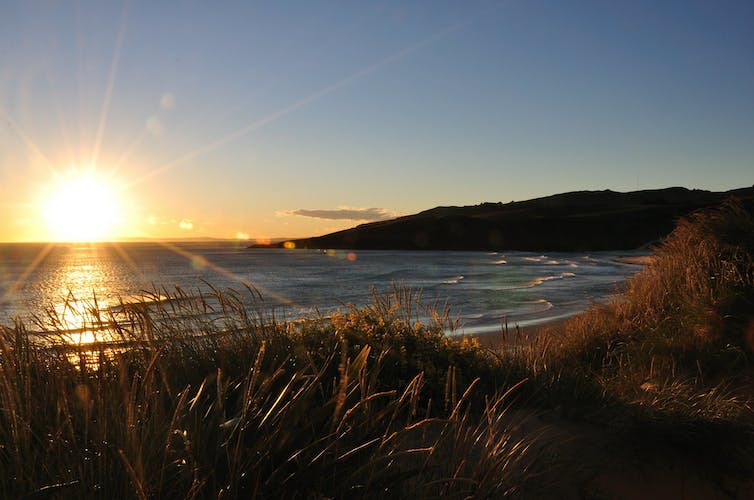 A warming planet created conditions that helped migration across Oceania including to New Zealand. Flickr/Domen Jakus, CC BY-NC Although these migrations are not clearly related to any of the earlier climate-change events, the wind patterns at the time were particularly favourable for sailing. Read more: Climate explained: Sunspots do affect our weather, a bit, but not as much as other things But the Little Ice Age could have reduced population size and pushed early Māori settlement northward. The Little Ice age probably hit people in the Northern Hemisphere much harder. The cold climate caused widespread crop failures, famines and population declines. During the last five years alone, the Earth is already ~1.1℃ warmer than 150 years ago and temperatures are expected to be +4.5℃ warmer than today by 2100. Today we are experiencing the warmest climate since our species started peopling the globe. Climate fluctuations that used to take millennia are now occurring in less than 100 years, affecting fresh water availability, food supply, health, and environmental integrity. Past climate changes set the stage for people to demonstrate immense adaptability and resilience by developing new skills, farming techniques, trading patterns and political structures, but most importantly by leaving their old, unsustainable ways of life behind.