As the two sides in US politics begin jockeying for position following the passing of Supreme Court Justice Ruth Bader Ginsburg, the similarities to the 2016 presidential election are striking.

That year, the fierce battle between Hillary Clinton and Donald Trump was made all the more contentious because the Republican-controlled Senate refused to allow a vote on President Barack Obama’s nominee to replace Supreme Court Justice Antonin Scalia, who had died in February.

Republican Senate Majority Leader Mitch McConnell pledged instead to “let the American people decide” the fate of the Supreme Court vacancy. His gambit worked. Trump won the election and successfully appointed a conservative justice to the court, some 14 months after Scalia’s death.

In recent days, however, McConnell is saying something altogether different. He’s made clear the Trump administration will decide who Ginsburg’s replacement will be — not the American people on election day. 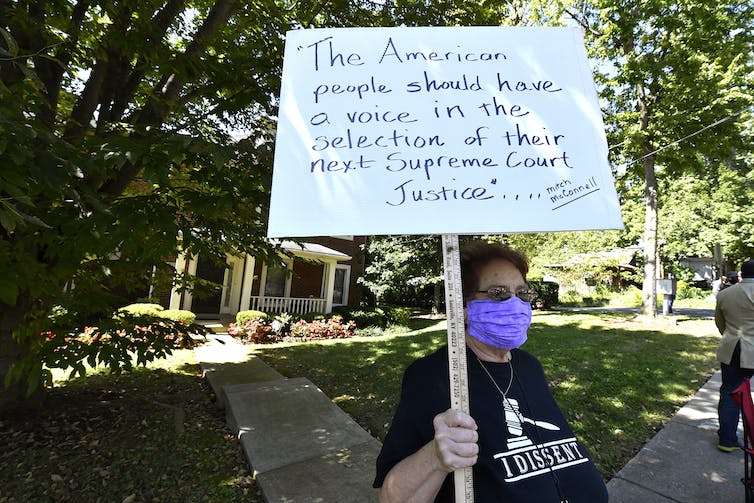 And Trump has also already announced he will nominate a woman to the court — signalling his intention to move quickly to replace Ginsburg, with just over 40 days left before the vote.

The impending fight guarantees an already rancorous race will become even more acrimonious, with long-lasting implications.

Read more: Can Trump and McConnell get through the 4 steps to seat a Supreme Court justice in just 6 weeks?

Why the Supreme Court is so important

As the third branch of government in the US, the Supreme Court not only keeps the powers of the other two branches (the legislative and executive) in check, it makes landmark decisions that can fundamentally transform the country, such as its 1954 ruling that the segregation of public schools was unconstitutional.

With the Supreme Court now featuring three judges appointed by Democratic presidents and five appointments by Republicans, the potential replacement of the progressive Ginsburg by a conservative judge could have generational implications for issues like affordable health care and access to abortion.

The Supreme Court has even settled contested presidential elections in the past, and with legal challenges to the 2020 election already mounting, there’s every likelihood this could happen again.

Why Republicans are passionate about conservative judges

Unlike American politicians, who are subject to the ballot box and term limits, federal judges — including Supreme Court justices — serve lifetime appointments.

The importance of such judicial appointments to Republicans cannot be understated. Few, if any, issues are more sacrosanct to them.

A key reason for this is that demographics are not on the side of the Republicans. The US is gradually becoming more urban and non-white — two trends that favour the Democratic Party more than Republicans.

This could explain why McConnell, whose memoir is called The Long Game, has prioritised the appointments of conservative judges to federal benches. These judges would certainly outlast the seemingly inevitable decline of conservative political power. 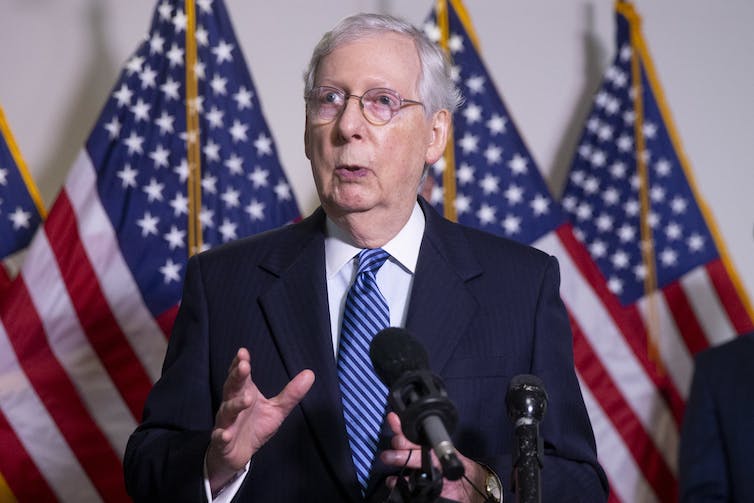 McConnell has said his motto for the year is ‘leave no [judicial] vacancy behind’. Michael Reynolds/EPA

Before Trump was elected in 2016, many Republicans questioned just how conservative he would be. In response, the Trump campaign made the unusual move of releasing a list of its intended candidates for the Supreme Court.

The list of established conservatives effectively quelled conservative concerns about the Trump candidacy. Indeed, exit polling in 2016 indicated 26% of Trump voters said Supreme Court nominees were the single most important factor in their decision to vote for him — compared to 18% of Clinton voters.

With Trump’s victory reliant on a combined margin of just under 80,000 votes across Michigan, Pennsylvania and Wisconsin, even the smallest of advantages — in this case, those deciding who to vote for based on the Supreme Court — could have had outsized importance.

Read more: Ruth Bader Ginsburg helped shape the modern era of women's rights – even before she went on the Supreme Court

Why Democrats are more passionate than ever

Some have posited a Supreme Court vacancy may help Trump’s chances in this year’s election because it shifts the focus of the race away from the president’s mismanagement of the coronavirus crisis and the poor economy.

But this ignores how much the issue could also energise the left. Indeed, in the hour after the announcement of Ginsburg’s passing, Democrats raised US$6.2 million on the Democratic digital fundraising platform ActBlue — more money in a single hour than the website had ever seen. This record was broken the next hour when donors gave over $100,000 a minute on average to total $6.3 million.

Altogether, some $42 million was raised in less than a day by Democratic online donors.

In 2016, many Republicans said they held their noses and voted for Trump because they were worried about the Supreme Court. Four years later, unenthusiastic Democrats may do the same with Joe Biden. 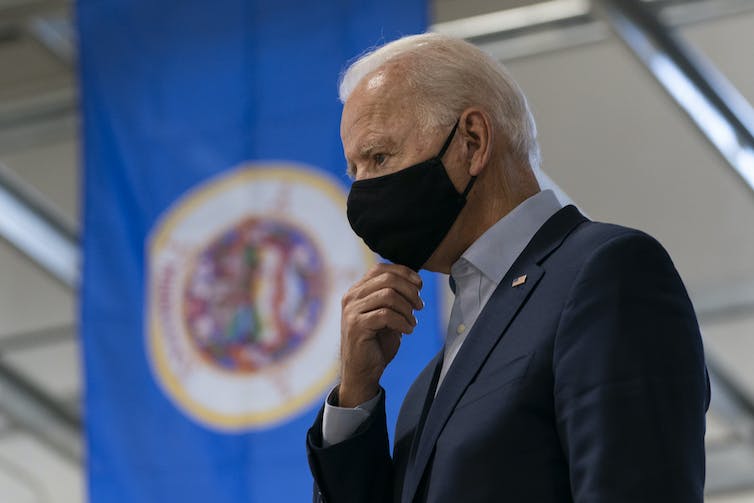 Biden’s campaign will likely turn the Supreme Court nomination fight into a referendum on the Affordable Care Act. Carolyn Kaster/AP

‘Nothing is off the table’

Constitutionally, McConnell and Trump face few barriers in their mission to confirm a conservative justice to take Ginsburg’s place. Even a “blue wave” on election day — in which Democrats take control of the Senate and the White House — couldn’t stop them because the winners are not sworn into office until January. This would ostensibly provide enough time for the Republican-led Senate to confirm a Trump nominee.

There is no doubt what McConnell and Trump are planning to do. The more pertinent question is whether 49 Republicans in the Senate will go along with them.

Even the most anti-Trump Republicans — like Senator Mitt Romney, who voted to impeach Trump earlier this year — have supported the president’s previous picks for the Supreme Court. (Only one Republican chose not to support Brett Kavanaugh following his contentious confirmation hearing.)

Read more: Republicans have used a 'law and order' message to win elections before. This is why Trump could do it again

But amid deep political polarisation, the likes of which America has not seen for generations, some Republicans are asking themselves about the long-term impact of rushing through a Supreme Court justice — most notably, what doors this opens for Democrats if they gain power.

Senate Minority Leader Chuck Schumer has said “nothing is off the table” if Republicans try to fill Ginsburg’s seat before the outcome of the election. 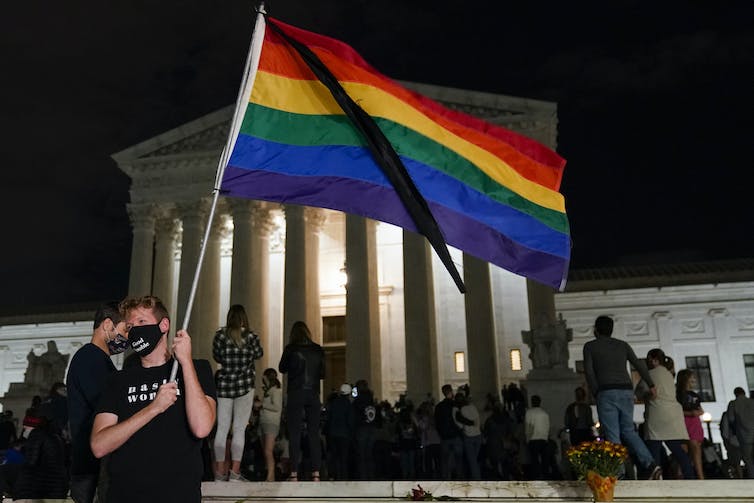 Crowds gathered at the Supreme Court in the hours after Ginsburg’s passing. Alex Brandon/AP

Some Democrats have also proposed expanding the Supreme Court to dilute the conservative votes — an idea Biden has explicitly criticised in the past.

Regardless of the electoral outcome, the death of Ginsburg only further raises the stakes and the likelihood of unrest in an already contentious election. There is no winner in such an outcome.