What is the Bermuda Triangle and why is it considered dangerous? Adellaii, age 13, Paterson, NSW

Hi Adellaii, thank you for your question!

The story of what we call the “Bermuda Triangle” actually began 56 years ago, in 1964. The name was first used by American author Vincent Gaddis in Argosy magazine, to describe an area the shape of a triangle in the Atlantic Ocean, off the coast of Florida. 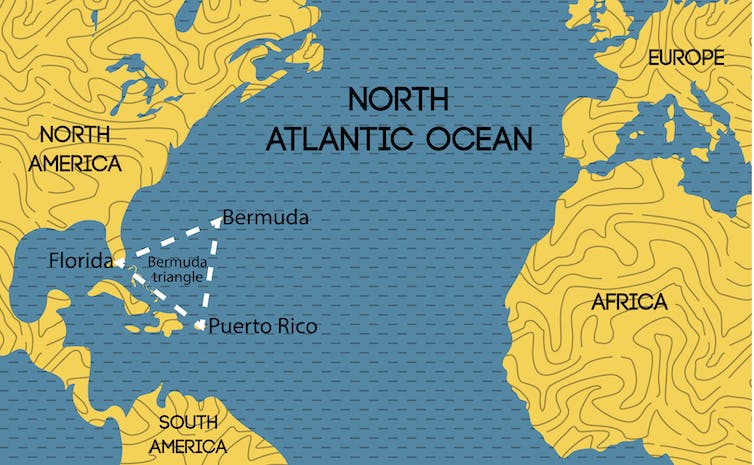 This area has also been referred to as the “Devil’s Triangle”. Throughout the decades it has been discussed in thousands of popular movies, books and documentaries. But why all the attention?

The hype around the Bermuda Triangle can be traced back to a series of unexplained disappearances of ships and aircraft.

In 1945, five US Navy planes and 14 men disappeared in the area while doing routine training exercises. The flight’s leader, Lieutenant Charles Taylor, was heard over the radio saying:

We are entering white water, nothing seems right. We don’t know where we are, the water is green, no white.

The US navy investigated and ultimately reported the incident as “cause unknown”. From the time of this incident until the mid-1980s, 25 small planes disappeared while passing through the Bermuda Triangle. They were never seen again. No wreckage was ever recovered.

These stories captivated the public. Some people gave extraordinary explanations, claiming there was something paranormal or supernatural going on. It was even suggested aliens or the mythical underwater lost city of Atlantis had something to do with the tragic events.

The fact that some official accounts of the incidents describe them as “cause unknown” had added to the intrigue.

In light of the above, we should ask ourselves: if we don’t know what caused something, or if something appears entirely mysterious, should we look for the answer in the paranormal (such as ghosts or spirits) or the supernatural (such as magic or miracles)?

Some people do. They find such explanations exciting. This is what has happened for decades with the incidents in the Bermuda Triangle.

However, when we take the time to learn more about these events and not jump to conclusions, they start to look much more ordinary.

Take the disappearance of Charles Taylor and the five planes which the US Navy investigated. The investigation found that as it got dark outside and the weather changed, Taylor had navigated the planes to the wrong location.

Taylor also had a history of getting lost while flying. He had twice needed to be rescued in the Pacific Ocean. The navy itself had a good idea of what had happened ahead of the disappearance.

But the incident was ultimately described as “cause unknown” because Taylor’s mother, not wanting to blame her son for the disappearance, maintained if the navy couldn’t find the aircraft they couldn’t say for sure what had happened. Not wanting to blame Taylor for the tragedy, the navy agreed.

Most of the pilots involved in the incident were trainees. This means they weren’t properly taught how to use all the aircraft instruments when flying at night, or in bad weather.

What’s more, the aircraft they had been flying were known to sink in as little as 45 seconds if they landed in water. And once aircraft sink in the vast ocean (although this is extremely rare these days), they are often never found again.

This is true even now, despite big improvements in aircraft technology and search-and-rescue methods. For instance, only a small amount of debris from the missing Malaysia Airlines MH370 flight, which disappeared in 2014, has been found. 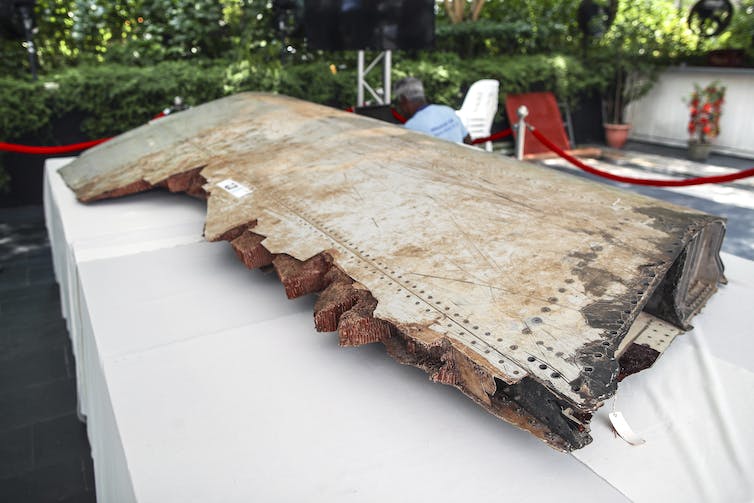 A piece of debris from Malaysia Airlines flight MH370 was displayed during a remembrance ceremony in Kuala Lampur in March last year, to mark the fifth anniversary of the plane’s disappearance. Fazry Ismail/EPA

Moving on from old tales

Today, large passenger planes often fly through the Bermuda Triangle and none disappear. You can even track flights in the area live online.

In fact, from the mid-1940s to the mid-1980s, more small planes have crashed over the US mainland than in the Bermuda Triangle. But because they crashed on land where the wreckage was found, they were not considered mysterious.

It has also been shown the number of ships and aircraft reported missing in the Bermuda Triangle is not much larger, proportionally speaking, than in any other part of the ocean.

Sometimes, when an event is hard to explain, it’s tempting to say it was caused by the paranormal or supernatural.

But if 1,000 aircraft fly through the Bermuda Triangle and we can explain what happened to 990 of them, should we say the other 10 were supernatural cases? No.

All we can say is we don’t know what happened for sure – and we should try to learn more. Usually when we learn more, the mystery disappears.

Read more: Why people believe in conspiracy theories – and how to change their minds