When you think of lyrebirds, what comes to mind may be the sound of camera clicks, chainsaws and the songs of other birds. While the mimicry of lyrebirds is remarkable, it is not the only striking feature of this species.

In research just published, we document the extraordinary changes that lyrebirds make to the ground layer in forests in their role as an ecosystem engineer.

Ecosystem engineers change the environment in ways that impact on other species. Without lyrebirds, eastern Australia’s forests would be vastly different places.

What is an ecosystem engineer?

Ecosystem engineers exist in many environments. By disturbing the soil, they create new habitats or alter existing habitats, in ways that affect other organisms, such as plants and fungi.

A well-known example is the beaver, in North America, which uses logs and mud to dam a stream and create a deep pond. In doing so, it changes the aquatic habitat for many species, including frogs, herons, fish and aquatic plants. Other examples include bandicoots and bettongs.

The Superb Lyrebird acts as an ecosystem engineer by its displacement of leaf litter and soil when foraging for food. Lyrebirds use their powerful claws to rake the forest floor, exposing bare earth and mixing and burying litter, while seeking invertebrate prey such as worms, centipedes and spiders.

Read more: Our helicopter rescue may seem a lot of effort for a plain little bird, but it was worth it

To study the role of the lyrebird as an engineer, we carried out a two-year experiment in Victoria’s Central Highlands, with three experimental treatments.

Second, an identical fenced plot but in which we simulated lyrebird foraging with a three-pronged hand rake (about the width of a lyrebird’s foot). This mimicked soil disturbance by lyrebirds but without the birds eating the invertebrates that lived there.

The third treatment was an unfenced, open plot (of the same size) in which wild lyrebirds were free to forage as they pleased.

Over a two-year period, we tracked changes in the litter and soil, and measured the amount of soil displaced inside and outside of these plots. 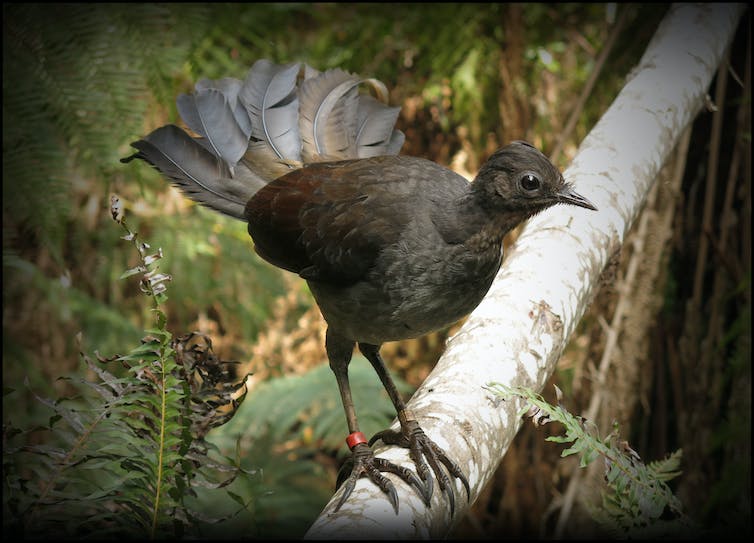 A colour-banded female lyrebird in Sherbrooke Forest, Victoria. Her powerful claws are used for foraging in litter and soil. Meghan Lindsay

Lyrebirds dig up a lot of dirt

On average, foraging by wild lyrebirds resulted in a staggering 155 tonnes per hectare of litter and soil displaced each year throughout these forests.

To the best of our knowledge, this is more than any other digging vertebrate, worldwide.

To put this in context, most digging vertebrates around the world, such as pocket gophers, moles, bandicoots and bettongs, displace between 10-20 tonnes of material per hectare, per year.

To picture what 155 tonnes of soil looks like, imagine the load carried by five medium-sized 30 tonne dump trucks – and this is just for one hectare!

But how much does an individual lyrebird displace? At one study location we estimated the density of the lyrebird population to be approximately one lyrebird for every 2.3 hectares of forest, thanks to the work of citizen scientists led by the Sherbrooke Lyrebird Study Group.

Based on this estimate, and to use our dump truck analogy, a single lyrebird will displace approximately 11 dump trucks of litter and soil in a single year.

Lyrebirds dig up a lot of dirt in forests.

Changes to the ground layer

Where lyrebirds foraged, the soil easily crumbled and the litter layer never fully recovered to a lyrebird-free state before foraging re-occurred.

This dynamic process of disturbance by lyrebirds has been going on for millennia, profoundly shaping these forests. For organisms such as centipedes, spiders and worms living in the litter and soil, the forest floor under the influence of lyrebirds may provide new opportunities that would not exist in their absence. 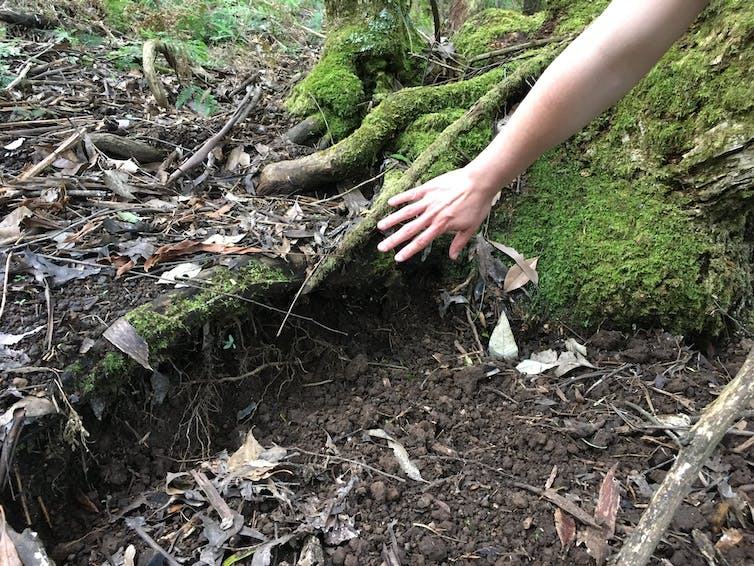 Terraced soil where litter has been removed and roots exposed by foraging lyrebirds. Alex Maisey

An ecosystem ravaged by fire

The Australian megafires of 2019/20 resulted in approximately 40% of the Superb Lyrebird’s entire distribution being incinerated, according to a preliminary analysis by BirdLife Australia.

Loss of lyrebird populations on this scale will have potentially far-reaching effects on forest ecology.

In the face of climate change and a heightened risk of severe wildfire, understanding the role that species such as the Superb Lyrebird play in ecosystems is more important than ever.

Without lyrebirds, eastern Australia’s forests would be vastly different places, with impacts extending well beyond the absence of their glorious song to other animals who rely on these “ecosystem engineers”.