The necklace worn by Michelle Obama while addressing the Democratic National Convention — a fine gold chain spelling out the word VOTE in spaced, sans serif letters — has gone viral.

Made by a small company owned by Chari Cuthbert, the necklace was designed “for powerhouse women who let their voices be heard, especially at the polls”.

Using jewellery to communicate a message is neither new or unusual. Archaeologists have described finding body adornments as “the closest thing to finding prehistoric thought.” Most jewellery, whether a ring or a medal or a badge, is visible to others and thus an expression of the wearer and their status.

But Obama’s is the latest in a long line of celebrated examples of jewellery as a political device: from suffragettes’ medals to Madeleine Albright’s pins. Even brooches worn by Queen Elizabeth have been read by some as political statements.

Examples from the British suffragette campaign for the vote (a political movement spanning from 1903 to 1918) included brooches and necklaces made from precious stones, enamel and ribbons. They used the colours of purple, white and green, associated with the Women’s Social and Political Union.

Medals awarded by the union leaders to women who contributed to the campaign drew on military aesthetics. Other jewellery worn by suffragettes reflected the fashions of the time, in particular art nouveau.

One Hunger Strike medal was awarded to women’s rights activist Myra Eleanor Sadd Brown after she was imprisoned in London in 1912, went on a hunger strike and was force fed. It includes an inscription on the reverse side “FED BY FORCE 4/3/12”.

More recently, Lady Hale, the president of the UK Supreme Court, wore a large, glittering spider brooch when announcing that Boris Johnson’s 2019 prorogation of parliament was “void and of no effect. There was discussion about what this brooch symbolised. Was it sending a message to the British prime minister?

In Australia, meanwhile, Greens Senator Larissa Waters caused a minor stir when she wore Stop Adani earrings in Parliament in 2018.

In some instances, the context in which it is worn - or by whom - makes jewellery political. The first female U.S. Secretary of State, Madeline K. Albright, wore brooches and pins to express political and diplomatic intent. "I found that jewelry had become part of my personal diplomatic arsenal,” she has said.

In 2009, the Museum of Art and Design New York exhibited over 200 brooches and pins from Albright’s personal collection. The exhibition coincided with the publication of Albright’s memoir Read My Pins: Stories from a Diplomat’s Jewel Box. Notably Albright’s brooches don’t usually include text: others must read the symbolism.

For instance, after media controlled by then Iraqi president Saddam Hussein referred to her as an “unparalled serpent”, Albright wore a golden snake brooch pinned to her suit for her next meeting on Iraq.

She also had an “arrow pin that looked like a missile” (worn when negotiating the Anti-Ballistic Missile Treaty with the Russians). And after learning the Russians had planted a listening device — a “bug” — in a conference room near her office in the State Department, she wore a bug brooch the next time she saw the Russians. 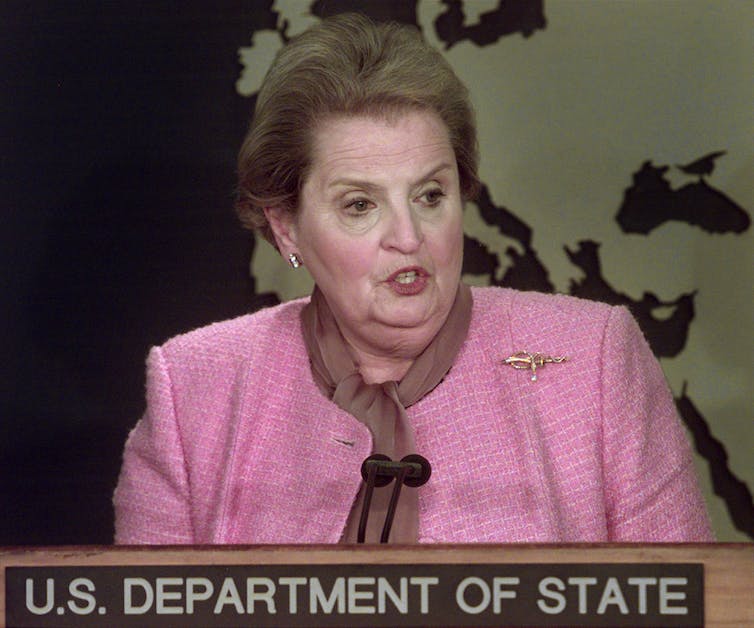 Madeleine Albright wearing one of her brooches in 2006. Pablo Martinez Monsivais/AP

In the late 1990s, Albright’s use of brooches for political purpose inspired Helen Drutt English to curate the exhibition Brooching It Diplomatically. Sixty-one art jewellers from 16 countries created brooches in tribute to Albright.

The origin of a piece of jewellery is also a consideration in understanding its meaning. In 2018, a simple green agate brooch Queen Elizabeth wore when meeting President Donald Trump and the First Lady, Melania, was identified as having been a gift from former President Barack Obama and Michelle, his wife.

At the next meeting, the Queen wore a snowflake brooch, a gift from Canada. Some read this as a reference to Trump’s use of the word “snowflake” as a derogatory term. 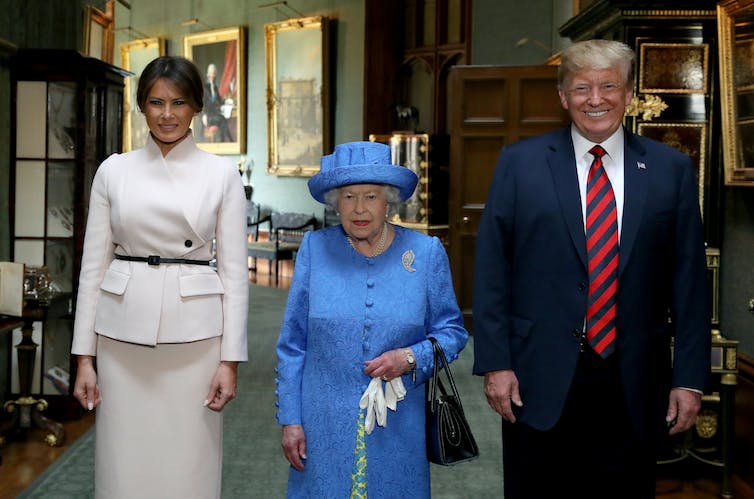 Queen Elizabeth with Donald and Melania Trump in July 2018. Her choice of brooches during this time prompted much analysis. STR/EPA

The Duchess of Sussex Meghan Markle’s interest in wearing ethically sourced or sustainable clothes and jewellery has been widely reported and signals her priorities. She has worn jewellery such as gold studs and bangles from Pippa Small a UK firm committed to fair trade.

Increasingly, jewellery firms small and large are making statements about their approach to ethics and sustainability. So in choosing what jewellery you buy, you can make a political statement, perhaps by supporting local workers or ethical workplaces.

Read more: Fashion production is modern slavery: 5 things you can do to help now

While some might seek to trivialise jewellery, a traditional form of feminine adornment, brooches, rings and necklaces can make powerful statements. Since Michelle Obama wore her VOTE necklace last week, sales of the necklace have reportedly skyrocketed.