China didn’t feature prominently in Prime Minister Scott Morrison’s speech last month to announce Australia’s $270 billion defence update, but it was clear this was the country on everyone’s minds.

We have become very China-centric in our strategic thinking in Australia — and this could be to our detriment. Beijing’s deepening defence ties with Russia remain a blind spot in our public debate that we need to start paying attention to.

China and Russia, once unlikely partners, have grown much closer in recent years, especially when it comes to security and defence. The two countries are closer now than at any point since late 1940s-early ‘50s.

Still, instead of taking a serious look at this publicly described “comprehensive strategic partnership” between Russia and China, we largely play down what unites these two major nuclear powers and the world’s most potent militaries outside the Unites States.

Troubled relations in the past

China and the Soviet Union (now Russia) didn’t used to be so close. In 1969, ideological and political tensions between the countries led to limited but violent border clashes.

Though both run by communist governments, China and the Soviet Union continued to view one another with mistrust and hostility until the mid-1980s, when they engaged in a gradual deescalation of tensions.

Following the downfall of the USSR in the 1990s, the two former rivals began to look for ways to partner in a common strategic agenda — namely to challenge US dominance in international affairs.

Read more: Russia not so much a (re)rising superpower as a skilled strategic spoiler

Not a renewed love affair but a closeness of convenience

Relations today are remarkably different from the 1960s-70s, largely because of the converging agendas of presidents Vladimir Putin and Xi Jinping.

Last June, Putin and Xi declared a “new starting point” in bilateral relations during a state visit by the Chinese leader to Moscow.

According to the Chinese state media, the leaders agreed to upgrade relations to a “comprehensive strategic partnership” — diplomatic speak for much closer friends, but not yet allies. And Xi remarked that the China-Russia relationship is “at its best in history”. 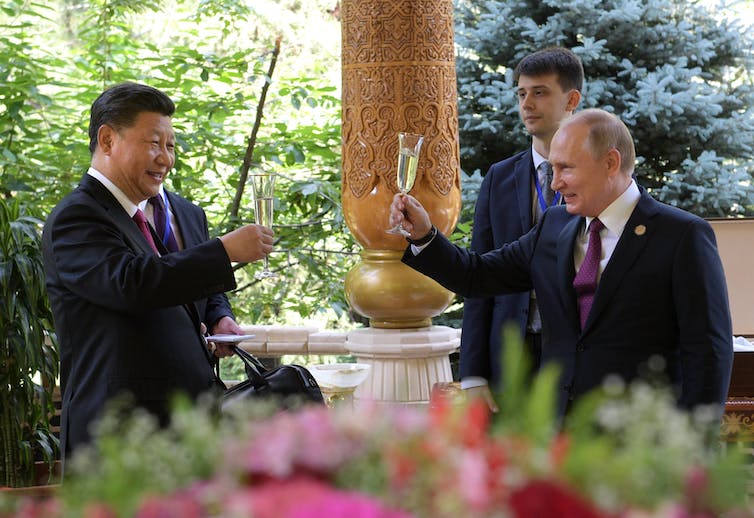 Then, in September, Russian and Chinese defence ministers announced a new defence agreement between the two powers.

Russia and China now appear poised to transform their partnership into something that looks more like an almost fully developed strategic alliance.

This closeness is based on some key mutual interests:

As part of this final point, Xi referenced the second world war in a phone conversation with Putin in May, emphasising that

China and Russia, as the main theatres in Asia and Europe during the war, made tremendous sacrifices for and indelible contributions to its final victory, thus saving humankind from demise.

It came as no surprise that a month later, the honour guards of the People’s Liberation Army marched in Red Square as part of grand celebrations to mark the 75th anniversary of Soviet victory over Germany.

The event was heavy on symbolism — yet another way for the two rivals to signal their growing closeness.

But according to China’s state-run Global Times, there was another objective: it was a way for Russia to show off its latest military hardware to a potential “client”. 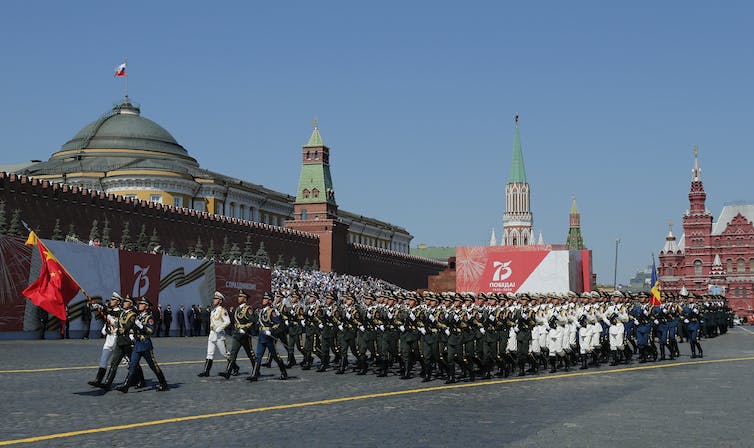 Russian arming and training of the PLA

Indeed, Russia remains a pivotal supplier of core advanced military technologies to the PLA and a major reason for its rapid growth as a modern fighting force — despite the fact China’s share of Russian arms exports declined from 60% in 2005 to around 14% by 2018.

In another sign of their growing closeness, the two militaries have also engaged in two to three war games per year, on average, over the past decade. Some 3,500 Chinese troops took part in Russia’s Vostok-2018 war games in 2018 — the largest exercise Russia has staged in 40 years. 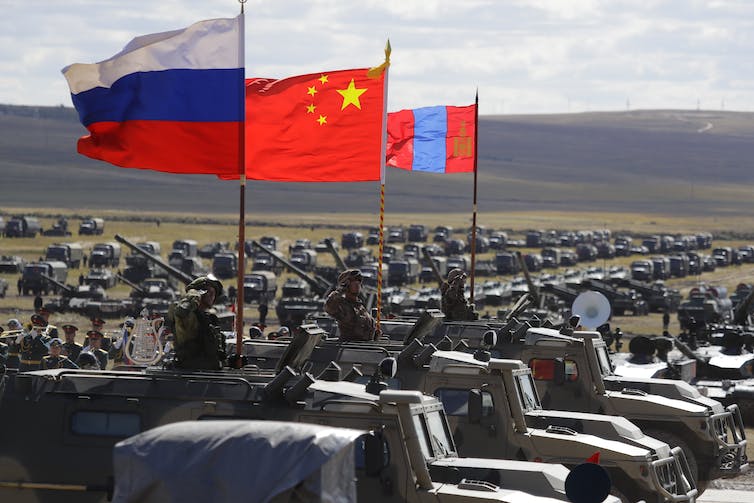 The Vostok war games spanned vast expanses of Siberia, the far East and the Arctic and Pacific oceans. Sergei Grits/AP

Li Zhanshu, a member of China’s Politburo Standing Committee, said at the time,

The US is double deterring China and Russia and attempting to separate us, but we understand their game and will not succumb. We will support each other’s national interests and security.

How the PLA is learning from Russia

Despite popular assumptions that Moscow will always be Beijing’s junior partner, the PLA is actually the one that benefits most from these regular joint interactions with the Russian military.

The PLA is currently in the midst of the most ambitious and potentially far-reaching reform in its history. Despite being a massive army, it lacks operational and combat experience, as well as an understanding of how to plan and execute large-scale joint force operations against a technologically advanced adversary.

In this context, the PLA can gain invaluable experience taking part in war games and other joint missions with the Russian military, a battle-hardened force that achieved its own remarkable transformation in recent years.

Time to stop being dismissive

The current state of strategic intimacy between these two military powers and nuclear-armed neighbours can no longer be ignored. Japan, for one, is clearly paying attention, with its 2020 Defence White Paper warning,

The authorities of both countries clearly denied that they would form a military alliance, but attention should be paid to future developments in light of the recent advancement in their military cooperation.

India, a longtime partner of Russia’s and rival of China’s, is also closely watching the situation. As one commentator put it,

When Russia and China seem to be in a close embrace, New Delhi has no option but to seek closer ties with Washington.

Some political experts and members of parliament in Australia are now starting to see the benefit of bringing Russia back into the fold to counter China’s rise.

Other experts, however, remain highly critical of any prospects of Russia and China forging an alliance.

This is a mistake. For now, Russia and China find the current status quo practical and convenient, and something they can use to support each other in strategic hedging against the West.

At the same time, the state of “comprehensive strategic partnership” does not preclude Moscow and Beijing from joining forces to respond militarily to mutual threats across the Indo-Pacific and beyond.

Our current debate about future strategic risks needs to consider this evolving reality.