Scientists have been interested in the flora of New Guinea since the 17th century, but formal knowledge of the tropical island’s diversity has remained limited.

To solve this mystery, our global team of 99 scientists from 56 institutions built the first ever expert-verified checklist to the region’s vascular plants (those with conductive tissue).

We found there are 13,634 formally described species of plants in New Guinea, of which a remarkable 68% are known to occur there and nowhere else. This richness trumps both Madagascar (11,488 species) and Borneo (11,165 species), making New Guinea the most floristically diverse island in the world.

From tarantula-like orchids to giant bananas, here we reveal some of the more mysterious plants on our checklist. Sadly, unsustainable logging and climate change threaten the conservation of many New Guinean species, and we highlight urgent solutions.

Read more: People are 'blind' to plants, and that's bad news for conservation

The majestic flora of New Guinea

New Guinea is a land of evocative contrasts. As the world’s largest tropical island – made up of Papua New Guinea to the east and two Indonesian provinces to the west - its biological diversity spans habitats from fringing mangroves to alpine grasslands.

The flora is diverse, filled with the majestic, stunning, intriguing and bizarre. However, very little is known about the conservation status of many species in New Guinea, which remains relatively unexplored by scientists. 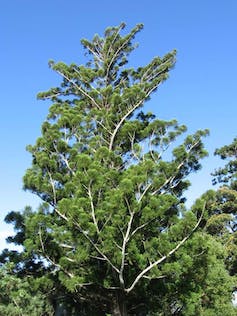 There are the few remaining forests of 60 metres high hoop pine (Araucaria cunninghamii) and klinkii pine (A. hunsteinii), that tower majestically up to 30 metres above the already tall rainforest canopy.

Figs, with their copious sap, are present in diverse forms, from small shrubs to vines, or large canopy trees.

And the strongly irritant black sap of the Semecarpus tree, a distant relative of the American poison ivy, causing severe dermatitis, is something naive botanists must learn to avoid!

Then there’s the Ryparosa amplifolia, a rainforest tree that provides swollen hollow stems for ant colonies to live inside. The tree also produces energy rich “food bodies” – granule-like structures on the leaves that mimic animal tissue and provide the ants with sustenance. In return, the ants act as bodyguards, chasing away insect herbivores, and leaf cleaners. 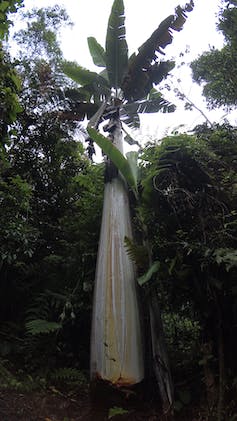 The giant banana tree holds the record of being the largest and tallest non-woody plant in the world. Rodrigo Camara, Author provided

Some of our most popular foods were domesticated from New Guinea, including sugarcane and bananas. But the giant banana, Musa ingens is a a highlight in montane forests. Its leaves can stretch to a length of 5 metres, the tree can grow more than 20 metres tall, and its fruits are massive.

With more than 2,400 species of native orchid species, New Guinea is one of the most spectacular floral gardens in the world. It includes fascinating species such as Bulbophyllum nocturnum, which is the first and only known example of a night-flowering orchid, and Bulbophyllum tarantula, with appendages that resemble the iconic spider. 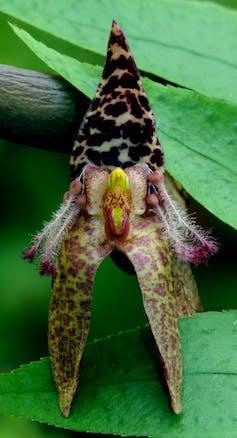 Bulbophyllum tarantula gets its name from its tarantula-like appearance. Jan Meijvogel, Author provided

Despite New Guinea’s seemingly high number of plant species, at least 3,000 species remain to be discovered and formally described. This estimate is based on the rate of description of new species in the past decades.

Much of New Guinea, particularly the Indonesian part, has been extremely poorly studied, with very few plant species collected. Even within Papua New Guinea, the distribution of many species is inadequately known. This means our findings should be viewed as a baseline upon which to prioritise further work.

The biggest impact on forest conservation is from logging, both clear-felling and degradation. As land is predominantly under customary ownership, addressing subsistence-related forest loss is a long-term challenge. Climate change adds yet further threats, including increased burning of degraded forest due to drier weather.

This means there’s a high risk of the world losing entire species before they are even known. 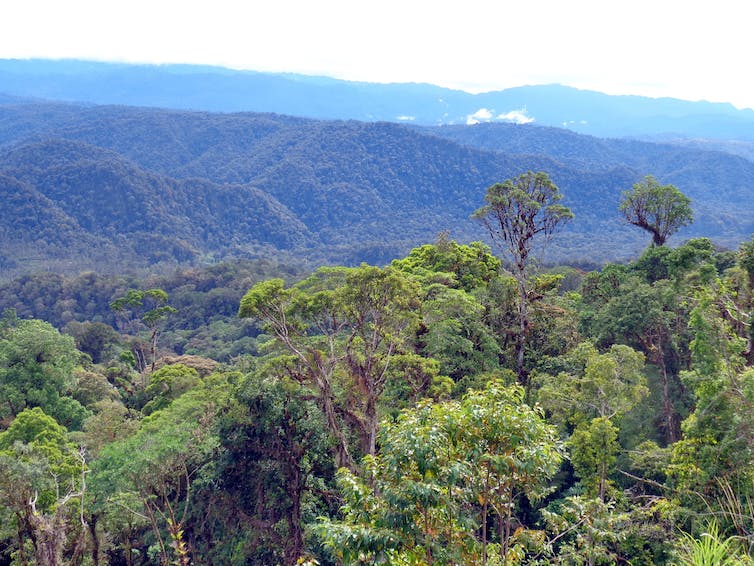 Unsustainable logging and climate change are the biggest threats to the flora of New Guinea. Shutterstock

To this end, in 2018 the governors of Indonesia’s two New Guinea provinces announced the Manokwari Declaration, a pledge to conserve 70% of forest cover for the western half of the island.

Our work builds on many decades of effort by plant collectors whose countless nights under leaking canvas, grass huts and bark shelters have led to thousands of plant discoveries.

Their stories are astounding. These fearless adventurers have sampled water plants by jumping from helicopters hovering low over Lake Tebera, swam in the Purari River rapids to haul a disabled dugout canoe full of botanists and cargo to safety, and have fallen into beds of stinging plants in the mountains of Wagau without subsequent access to pain relief.

Taxonomy – the discipline of identifying, classifying, and understanding relationships between plants – is the key to unlocking the value of this collecting effort. 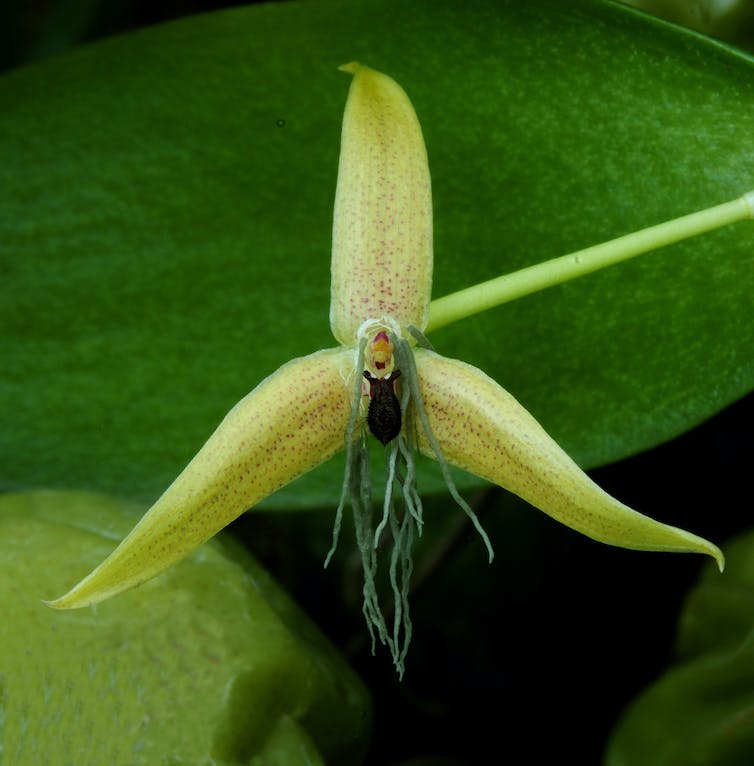 Bulbophyllum nocturnum: the first known example of an orchid species in which flowers open after dark and close in the morning. Jan Meijvogel, Author provided

But the discipline is suffering from global funding shortfalls and declining engagement. For instance, 40% of our co-authors on this work are 55 years or older.

Future opportunities for botanical research with local New Guineans at the helm is also vital – only 15% of the scientific publications on the New Guinean flora over the past 10 years involved local co-authors.

Undoubtedly, the conservation of New Guinea’s unique flora will be challenging and require work on many fronts that transcend single disciplines or institutions. From what we know already, a world of botanical surprises awaits in the last unknown.

After all, as 19th century naturalist J.B. Jukes wrote:

I know of no part of the world, the exploration of which is so flattering to the imagination, so likely to be fruitful in interesting results […] and altogether so well calculated to gratify the enlightened curiosity of an adventurous explorer, as the interior of New Guinea.

Read more: From superheroes to the clitoris: 5 scientists tell the stories behind these species names