Media coverage of disasters follows a broadly similar trajectory, even though the disasters themselves might take very different forms.

The COVID-19 crisis in Victoria is no exception.

Although it is unfolding over a long time instead of in a single dramatic episode, it is possible to see familiar patterns emerging, and events over the past three weeks indicate that a notable shift has taken place.

From impact and response – which constitute the first two phases of disaster coverage – the focus has broadened to include the blame phase. From a media perspective, this can be called the accountability phase.

This shift can be explained to some extent by a change in political rhetoric. The theme of unity across levels of government and party lines has begun to fracture, particularly with remarks by the federal treasurer, Josh Frydenberg, directed at the Victorian government.

On August 7 he said Victorians deserved answers about “serious failures with deadly consequences” in the state’s coronavirus hotel quarantine system.

However, Frydenberg was only echoing what the media had already started to investigate, and journalists with trusted sources had begun getting leaks.

In mid-July, The Age drew on leaked emails to reveal that a senior bureaucrat in the Department of Jobs, Precincts and Regions raised the alarm on March 28. Senior people in the Department of Health and Human Services and Emergency Management Victoria were urged to ask Victoria Police to deploy officers to the quarantine hotels.

Two months later, the first case was logged of a security guard at Rydges on Swanston testing positive for coronavirus. This cluster grew rapidly to six cases. 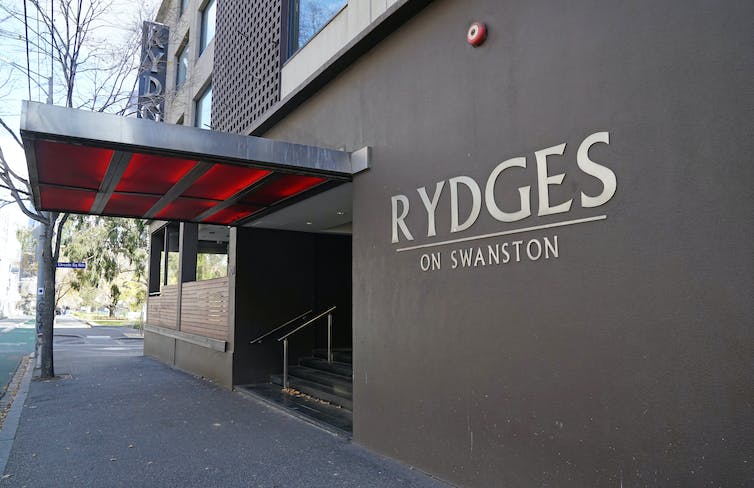 Rydges on Swanston, used for hotel quarantine, where a coronavirus cluster soon took off. Scott Barbour/AAP

Even though this startling information was now in the public domain, Victorian Premier Daniel Andrews remained focused on impact and response.

When asked what went wrong with hotel quarantine, he would say only that he was ultimately responsible and that retired judge Jennifer Coate’s inquiry would provide the answers. Meantime, he would not be running a commentary on it.

Victorian Health Minister Jenny Mikakos took the same line in state parliament on August 4. She later tweeted, though, that she was “deeply sorry” if her efforts had not been enough.

“Let the cards fall where they may”, she said, referring to the inquiry.

Principled though this is, it shows the government has not sufficiently appreciated that the trajectory of the coverage has undergone that important shift, from impact and response to accountability.

Coate has herself licensed public debate about these matters.

In failing to respond to repeated questions both in parliament and at the premier’s daily media briefings, the government has lost control of the accountability narrative.

A report in The Age and Sydney Morning Herald on August 8 rammed home this point.

It stated that the executive director of employment in the Department of Jobs, Precincts and Regions had been removed from their role over the quarantine bungle.

It went on to describe a well-intentioned, if misguided, decision to engage a company called Unified Security in the hotel quarantine operation. Unified was reported to have satisfied the criteria for receiving contracts under the government’s social inclusion procurement policy.

Moreover, the government’s international trade agency, Global Victoria, with no obvious experience in security or public health, reportedly also had a role in establishing the quarantine arrangements.

Even before these revelations, frustration was building among reporters at the government’s refusal to engage on the issue of accountability.

At Andrews’ daily briefing on August 6, a reporter from The Australian, Rachel Baxendale, pressed the premier for answers.

The upshot was that Baxendale, who was only doing her job, became the completely undeserving target of a stream of online hatred, including death threats.

First, some people have a sociopathic problem with strong women in the media who try to hold powerful men to account. We saw it recently with a similar attack on the ABC’s Leigh Sales after she had interviewed the prime minister on the 7.30 program.

Read more: Leigh Sales showed us the abuse women cop online. When are we going to stop tolerating misogyny?

Second, Daniel Andrews may retain considerable support in the wider community for fronting up every day to tell unwelcome truths.

It stands in sharp contrast to the crass name-calling indulged in by Liberal MP Tim Smith, which has undermined the efforts of his leader, Michael O'Brien, to offer constructive proposals for economic recovery.

Third, the public may still be very much absorbed in the impact and response phases of the disaster and not ready to move on to the accountability phase.

This is sometimes difficult for the media to judge.

In the aftermath of the 2009 Black Saturday bushfires, the Victorian media were noticeably slower to get into the accountability phase than were the national and interstate media.

Victoria-based journalists and editors said that, in covering a disaster close to home, it was important not to get into the blame game while the community to whom they were publishing was still acutely anxious and grieving.

With an ongoing disaster, this judgment becomes even more delicate.

However, a second line of inquiry in pursuit of accountability that might be more in tune with community sentiment is open to the media: what went wrong in privately run nursing homes, for which the federal government is responsible?

Minister for Aged Care Richard Colbeck has not been giving daily briefings. Some close questioning of him might be in order, with less risk of public blow-back.