Far beneath the city of Dongshen in northern China, we have discovered what may be the 2 billion-year-old birthmarks of Earth’s first supercontinent.

An ancient dipping structure in the planet’s crust appears to be a trace of an early collision between two continental masses like the one that created the Himalaya – and may record the origin of the global system of plate tectonics that persists today.

Read more: How Earth's continents became twisted and contorted over millions of years

When did plate tectonics begin?

The theory of plate tectonics is one of the key scientific advances of the past century. It explains how Earth’s crust is made of enormous rocky “plates” floating on the planet’s molten interior, which slowly move around. These movements are responsible for earthquakes and mountain ranges.

Earth is the only planet we know of with plate tectonics. The motion of the plates gradually cycles elements between the interior of the planet, the surface and the atmosphere, generating the resources and environment that make human life possible.

At some point in the deep past, plate tectonics began as Earth cooled. When this happened, however, has remained controversial. Dates spanning three-quarters of Earth’s history have been proposed, from the Hadean eon (between 4.5 billion and 4 billion years ago) to the late Proterozoic eon (less than a billion years ago).

Many of these dates come from isolated samples showing the existence of single plates. However, plate tectonics is a global phenomenon in which plates interact with each other. We studied one of these early interactions: a collision in what is now northern China, in which the edge of one plate was thrust upwards while the other was pushed down.

Our new study suggests plate tectonics began globally somewhere between 2 billion and 1.8 billion years ago. The research, published in Science Advances, was carried out by an international team from China, Germany and Australia, led by Wan, Bo from the Institute of Geology and Geophysics of the Chinese Academy of Sciences (IGGCAS).

We studied an area geologists call the Ordos block, which is part of the North China craton, a very stable chunk of the Asian continent that takes in parts of northeastern China, Mongolia and North Korea.

In April 2019, we deployed 609 seismic recording stations spaced every 500 metres along a 300-kilometre line. By combining the earthquake data from these stations, we were able to form a detailed picture of Earth’s crust in this area.

Beneath the city of Dongsheng, we found a feature called a dipping Moho in which the bottom of Earth’s crust dips from around 35km deep to more than 50km deep over a horizontal distance of only 40km.

This dipping structure looks nearly identical to what is found beneath the Himalayan mountains, except it is around 2 billion years old. 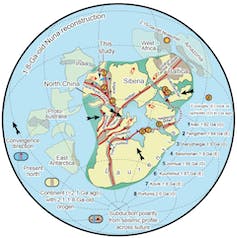 Next, we collected seismic evidence from other studies around the world for similar dipping Moho structures that are about the same age. Putting observations from six continents together, we can form a picture of the creation of the ancient supercontinent Nuna.

Nuna (sometimes also called Columbia) is believed to have been made up of parts of most of the continents that exist today. If Nuna was the first supercontinent, we can interpret these tectonic collisions that occurred around 2 billion years ago as the oldest evidence of plate tectonics in the global sense. Even though such collisions may have occurred here and there early on, it is likely that plate tectonics did not become a global network until this time.