Australian universities are suffering revenue and job losses due to the current and projected loss of international students. A Mitchell Institute report has estimated the sector may lose up to A$19 billion in the next three years, while modelling from Universities Australia shows more than 20,000 jobs are at risk over six months, and more after that.

Months of tension with China (the biggest source of Australian university international students, at a third of the total) threatened to further jeopardise our international standing.

On Monday, the Australian government announced it will restart granting international student visas and allow current students to count online study while overseas in a push to restart international education.

But how do we compare with some of Australia’s largest competitors?

Australia imposed a ban on travel from China on February 1, stranding an estimated 87,000 students abroad who were due to start their academic year in Australia in March.

By that time it was the middle of the second, or winter, semester for Australia’s big English language competitors in the northern hemisphere: the USA, UK and Canada. Most of these countries’ international students stayed to complete their semester, so universities did not suffer an immediate fall in revenue.

But universities in these countries did incur substantial additional costs as many completed the semester by transferring teaching online at short notice.

While online education meets similar standards to campus-based education, students prefer face-to-face learning. This is particularly true for international students, who see immersion in a different culture as one of the main benefits of studying overseas.

In May, many US and UK universities announced bullish plans to teach their first semester in autumn, starting in September, face-to-face (or mask-to-mask). There were various provisions for plexiglass, physical distancing, masks and regular testing.

But even partial campus reopening plans were never credible in the US when they were announced. Still, many universities in the competitor countries sought to maximise international enrolments by maintaining at least a substantial part of their campuses would be open by September.

US universities no longer seem to be nearly as strong competitors for international students. While the number of new COVID-19 cases has bumpily fallen in Australia, Canada and the UK, they have been increasing in the US.

When it became clear US universities could not responsibly open their campuses, they started reversing their announcements of opening fully in September. 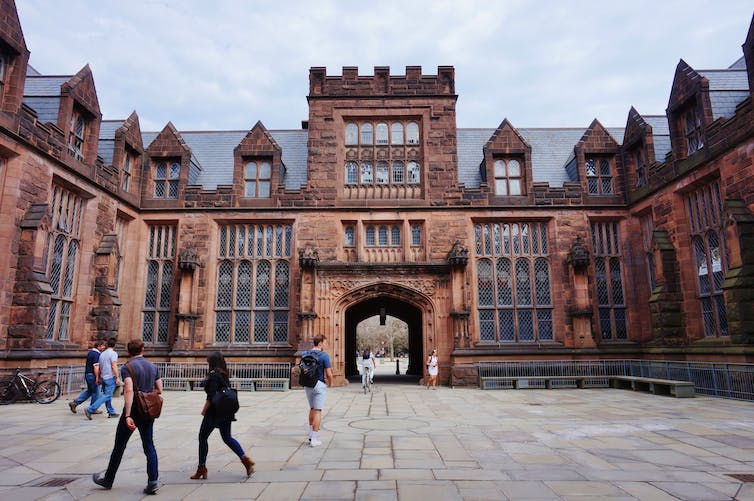 Princeton University. It’s unlikely many US universities will be able to offer full on-campus education in their first autumn semester. Shutterstock

By July 20 some 53% of 1,215 US universities surveyed still planned to teach in person in September, 11% planned online education, 32% planned a mix of online and in person education, and 4% were considering a range of scenarios or had not yet decided their education mode.

US President Donald Trump sought to pressure universities to open fully by making studying at least partly on campus a condition of international students’ visas. He soon reversed that order, but may issue an alternative seeking the same effect.

US attractiveness as an international study destination is likely to be further reduced by the instability in universities’ plans, the uncertainty of federal immigration conditions, and continuing restrictions on entry from China and elsewhere.

Australian universities are in a much more similar position to UK universities, which are long time and powerful rivals for international students. They are expecting to lose substantially from COVID-19’s suppression of international enrolments.

Unlike Australia, the UK government has granted universities access to government-backed support such as a job retention scheme which includes short-term contracts, and business loan support.

Unlike Australia, the UK does not impose international travel restrictions but requires entrants from most countries including China and India to self-isolate for a fortnight after entry. It will therefore remain a more attractive destination for new students until Australia lifts or at least relaxes its travel restrictions.

Canadian universities and colleges have some distinct advantages over their competitors for international students. They enjoy considerable financial and other support from their national and provincial governments.

While Canada’s average proportion of new COVID-19 cases is similar to Australia’s and the UK’s, these are concentrated in the biggest cities of Toronto, Montreal and their environs. The Atlantic provinces have Tasmanian levels of COVID-19 cases, and some of their universities attract very high proportions of international students. 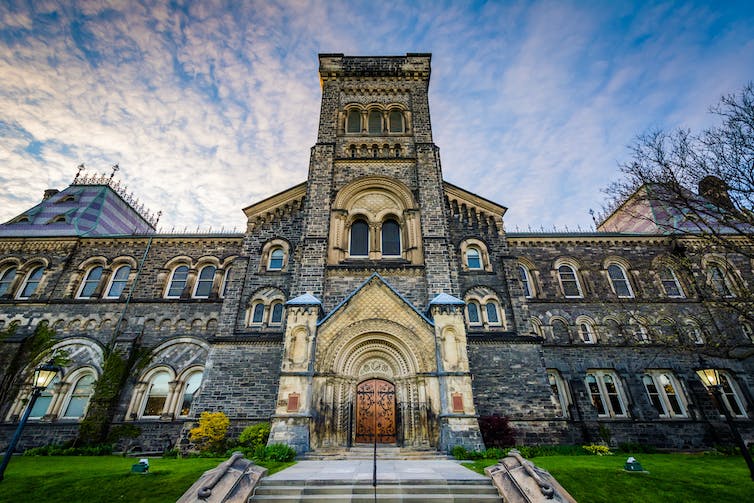 The University of Toronto. Canada’s universities have received more support from their government than Australia’s. Shutterstock

Canada’s biggest competitive disadvantage is that while it will admit returning international students, it currently is not admitting new students for the foreseeable future.

The Canadian government will grant permits to international students who study online from abroad, and like Australia this will count towards their eligibility for a post-graduation work permit. The government has also introduced a temporary two-stage approval process for international students to expedite their approval to enter to study on campus when this is permitted.

Read more: Interactive: international students make up more than 30% of population in some Australian suburbs

But Canada is not likely to be a desirable destination for new international students until the government and then institutions can give a firm timetable and clear plans for studying on campus.

So, what should Australia do?

To remain competitive compared to the UK, Australian universities should keep prospective students updated on the issues that affect their study decisions such as entry requirements, start dates, and study and accommodation conditions. This communication should be targeted towards education agents and their clients, and be specific to individual students.

Few students and their parents are convinced about the value and quality of online education. And they fear much of the benefit of immersion in an English speaking university environment would be lost if spatial distancing required social distancing.

Australian universities will have to be as clear as they can about the benefits of the study and living conditions students are likely to experience here.