The cancellation of events due to the COVID-19 pandemic has hit Australia’s music industry hard, with reports of losses up to A$200 million.

In response to the pandemic, the world’s first drive-in rave took place in Germany in May. Australia followed suit with Airwaves on the Sunshine Coast earlier this month. The Drive-in, a series of pop-up gigs in Melbourne, was also planned for this month but has now been cancelled.

People will be driving to and from venues where alcohol is available, and in some cases where illicit drugs are used.

Read more: Australia's drive-ins: where you can wear slippers, crack peanuts, and knit 'to your heart's content'

Risk of drink and drug driving

Normally, festival-goers can reduce risks of harms from alcohol or illicit drugs by not driving to and from the event. And some festivals are multi-day events where people stay overnight, so they can plan not to be intoxicated for the drive home.

But drive-in festivals require people to bring their own car. And they need to drive home immediately afterwards.

The Victorian code of practice for safer music festivals explicitly says alcohol- and drug-affected people should be strongly discouraged from driving.

Although legally you can have small amounts of alcohol in your blood while driving, the key message is not to drive if you have had any alcohol at all.

Read more: Getting back on the beers after lockdown? Here's what you should know

Alcohol and other drug testing

One option is to conduct roadside tests for alcohol and illicit drugs as people leave drive-in festivals. Police already do this routinely at festivals.

There is good evidence alcohol breath testing is effective in reducing road crashes and deaths. Breath testing could prevent road incidents after drive-in festivals in the same way it has reduced incidents among the general population.

Blood alcohol testing detects current levels of alcohol. The higher your blood alcohol concentration, the more impaired you are behind the wheel. 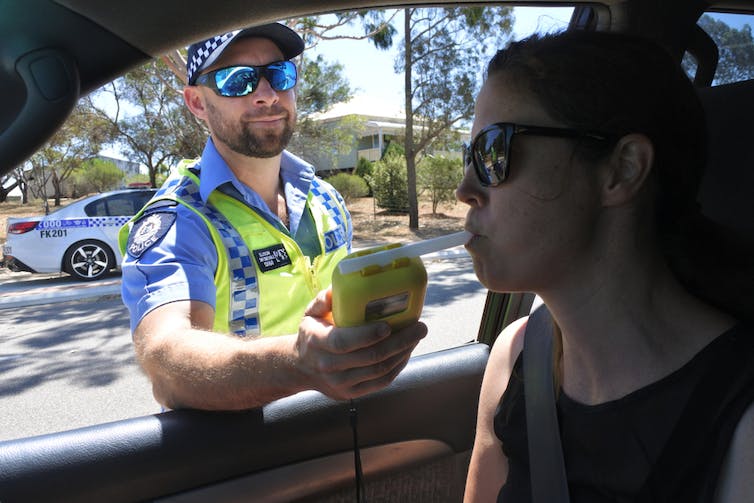 Police could breathalyse people as they leave drive-in music festivals. from www.shutterstock.com

But illicit drug testing is not a direct measure of impairment at the time of testing. It only indicates whether you have used a drug within the window of the test. Some drugs can be detected in the system for several days after use. Drivers could test positive but not be affected by drugs at the time.

There are also questions about the reliability of the tests and very little evidence roadside drug testing is associated with fewer crashes.

What else can we do to reduce harms?

Peer organisations, like DanceWize, provide harm reduction information and outreach at music festivals. They provide a safe space for people to chill out, chat with peers or ask questions about drugs and mental health concerns.

But during a drive-in festival, people need to sit in their cars. So there is less opportunity for them to access outreach services in the usual way. 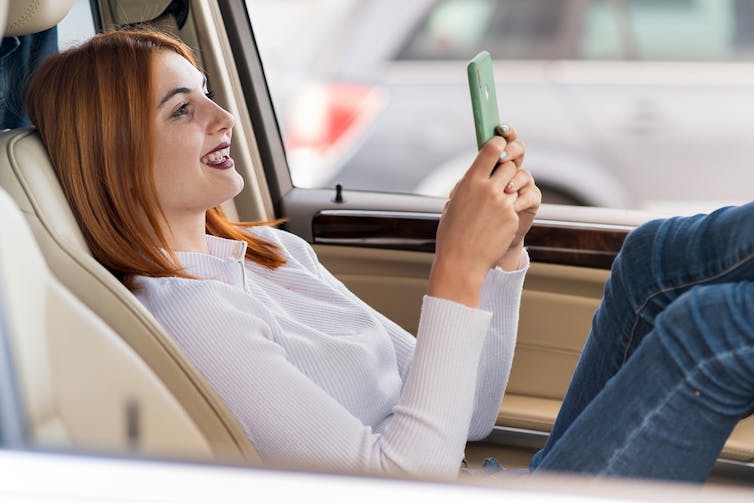 Festival goers could receive harm reduction messages and support on their phones. from www.shutterstock.com

Online harm reduction communities that have been operating for years, like Bluelight, and more recent digital communities, like Sesh Safety, could provide harm reduction information specifically aimed at drive-in festival goers, through their existing digital channels.

Usually at a music festival, attendees are standing, dancing or moving around the festival ground. So, security, outreach workers and other patrons can look out for people who may have been affected by alcohol or other drugs and take them for medical or first aid treatment.

But with drive-in festivals, there is less incidental opportunity to direct people to help.

So promoters could distribute information about where to access harm reduction information, and about available medical and first aid help, as people drive into the festival.

Drug checking allows people to anonymously submit drug samples for forensic analysis so they can make informed decisions about what they’re about to take. Counselling is also offered.

We know drug checking is effective in reducing harms at music festivals, but it is not available in Australia outside specific trials.

Read more: When the coroner looked at how to cut drug deaths at music festivals, the evidence won. But what happens next?

Running a drug checking service from a drive-in festival in COVID-19 times would be more challenging, but not impossible, by using technology to deliver feedback via text or app.

Festival-goers could chat by text with the drug checking team to discuss their specific drug-use history, circumstances, and the results of the analysis. But there would be less anonymity than a usual drug checking service.

Although smaller music venues are slowly reopening in some states, large music festivals are likely to remain closed for some time. So drive-in festivals might sound appealing.

But they throw up specific risks promoters need to address to ensure the safest possible environment for people eager to access COVID-safe live music venues.

So promoters need to work closely with police, health workers and young people themselves to effectively address some of these additional risks.

You can find harm reduction information at Bluelight, DanceWize Victoria and NSW and the Global Drug Survey. If you are worried about your drinking or drug use, or want support to make changes, you can call the National Alcohol and Other Drug Hotline on 1800 250 015; chat online with a counsellor at CounsellingOnline; talk to your GP about seeing a psychologist or counsellor; or try Hello Sunday Morning, an online community of people actively changing their alcohol consumption.