This article is a preview of Flora, Fauna, Fire, a multimedia project launching on Monday July 13. The project tracks the recovery of Australia’s native plants and animals after last summer’s bushfire tragedy. Sign up to The Conversation’s newsletter for updates.

The unprecedented intensity and scale of Australia’s recent bushfires left a trail of destruction across Australia. Millions of hectares burned and more than a billion animals were affected or died. When the rains finally arrived, the situation for many fish species went from dangerous to catastrophic.

Hundreds of thousands of fish suffocated. It was akin to filling your fish tank with mud and expecting your goldfish to survive.

Take, for example, the plight of the endangered Macquarie perch (Macquaria australasica), an Australian native freshwater fish of the Murray-Darling river system. 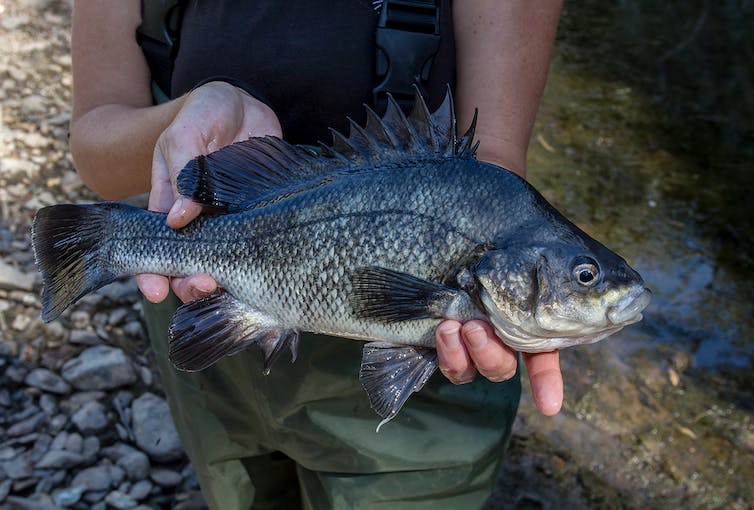 Read more: Fish kills and undrinkable water: here's what to expect for the Murray Darling this summer

Macquarie perch were once one of the most abundant fish in the Murray-Darling Basin. Revered by the community and once responsible for supporting extensive Indigenous, recreational, commercial and subsistence fisheries, they are an iconic species found nowhere else in the world. However, they have very specific needs.

Macquarie perch like rocky river sections with clear, fast-flowing water, shaded by trees and bushes on the banks.

Massive change wrought on our rivers over the past century means Macquarie perch are now only found at a handful of locations in the Murray-Darling Basin.

One habitat - Mannus Creek near the NSW Snowy Mountains - is particularly special because it was relatively pristine before the fires. In fact, this creek contained the last population of the threatened Macquarie perch in the NSW Murray catchment. A study in 2017 found a Macquarie perch population that was restricted to a 9km section of the creek but was doing quite well.

That was until bushfire rapidly swept through the catchment in January this year.

Some of us visited the creek three weeks after the fires. The intensity, ferocity and speed of the fires meant nothing was spared. The former forest floor was literally a trail of death and destruction – dead and charred kangaroos, wallabies, deer, possums and birds were everywhere.

All that remained of Mannus Creek was green pools in a blackened landscape, still smouldering days after the fire front passed. We immediately feared for the Macquarie perch we’d sampled, which were quite healthy less than a year before.

To our surprise, some Macquarie perch had survived. But with most of the catchment fully burnt, and no vegetation to stop runoff, we knew it was a ticking time bomb.

With little time, we had to remove as many fish as possible from Mannus Creek before the rains arrived. The plan was to create an “insurance population” in case rain caused the water conditions to deteriorate.

We rescued ten fish. Days later, rain washed ash and silt into the channel. Within hours, the once-pristine creek became flowing mud with the consistency of cake mix.

A government rescue team arrived a few days later to rescue more fish, and despaired at the “wall of ash and mud”.

An ark across Australia

The ark is housing not only the Macquarie perch but other threatened species too. The rescued individuals, and perhaps their entire species, would have almost certainly perished during runoff events without these interventions.

What next for the Macquarie perch?

Nobody knows for sure how many fish survived in Mannus Creek, nor how long it will take for the creek to recover. It could be years. 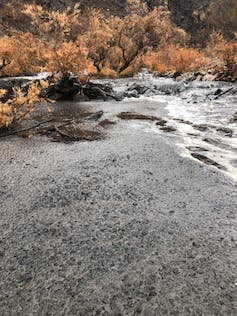 The challenge now is to support the rescued fish until it’s safe to either return them to the creek, or breed offspring and introduce them to their natural habitat.

Fish must be kept healthy and disease-free in captivity, and enough genetic diversity must be maintained for the population to remain viable.

If these rescued fish are held in captivity for too long, they might die. But equally worrying is that affected waterways may not recover in time to allow reintroduction.

While maintaining the rescued populations, we must redouble our efforts to improve their natural habitats.

Burnt areas can allow pest plant and animal species to take hold and change habitats, so these threats need to be controlled. Finding similar, unburnt refuge areas is also crucial to prepare for future events and protect ecosystem resilience.

Working through these considerations - and quickly - is essential to giving these species the best hope of survival.

Funding, equipment and human resources are desperately needed to help our rivers recover. But we know that without an effective on-ground intervention, recovery could take decades.

For the iconic Macquarie perch, that would be too late.