In 2019, Dujuan Hoosan travelled from Garrwa country in the Northern Territory, to Geneva where he addressed the United Nations Human Rights Council.

As he sat by his father’s side, he stated the purpose of his visit:

I come here to speak with you because the Australian government is not listening. Adults never listen to kids like me, but we have important things to say.

Dujuan, in identifying himself as a “kid like me”, signalled to the world his disempowerment as an Aboriginal child by the Australian state.

As one of the youngest people ever to address the UN, as a powerful child healer in his own community and as the subject of the documentary film In My Blood It Runs, Dujuan is exceptional.

But as an Aboriginal child much loved by his family, alienated by the education system, and under the purview of child welfare and Northern Territory youth justice, Dujuan’s story is all too common.

At one point in the film, Dujuan’s teacher reads Eve Pownall’s The Australia Book, published in 1952. The cover features illustrations of imperial soldiers and a naked Aboriginal man and child. The teacher reads:

Now this one isn’t a story. It’s information, or non-fiction. It’s fact. The Australia Book. It’s about the history of our country. At Botany Bay, Cook landed for the first time in the new country […] On an island in Cape York he raised the English flag and he claimed for the English country the whole of this new land.

Throughout the film we witness the disjuncture between Dujuan’s sense of self as a strong Aboriginal child against his mounting disillusion with school.

He is increasingly forced to disengage rather than comply with an education system he experiences as inherently problematic. Like many Aboriginal children and young people – and by extension their families – Dujuan is disciplined for his non-compliance. 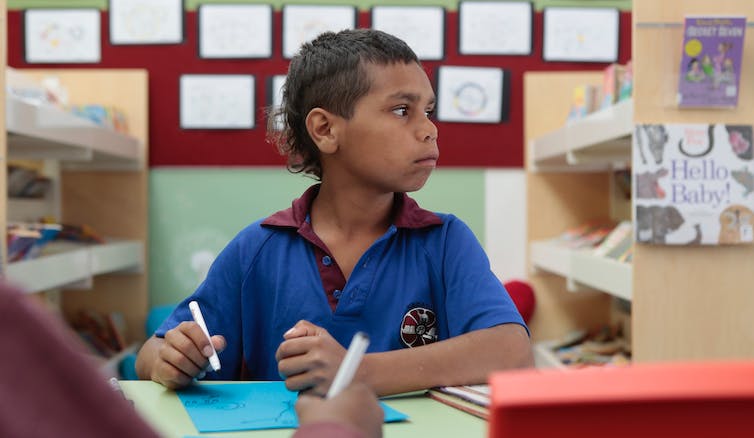 Dujuan becomes disengaged by a curriculum which he experiences as exclusionary of his worldview as an Aboriginal child. Maya Newell/In My Blood It Runs

Families are disciplined through the suspension of welfare payments and threatened with the removal of children.

Families are told if their kids don’t go to school, it is inevitable their children will end up in prison.

In this moment where Black Lives Matter gains global traction, it is vital we remember Aboriginal and Torres Strait Islander young people make up a significant proportion of people who are detained and die in prison and police custody.

The 1991 Royal Commission into Aboriginal Deaths in Custody signified a watershed moment in the national sensibility around the relationship between Indigenous peoples and the criminal justice system. The Commission investigated 99 deaths; 27 were under the age of 24.

Read more: Why are so many Indigenous kids in detention in the NT in the first place?

In 2018, on any given night in Australia, Aboriginal young people made up nearly 3 in 5 young people in detention, despite constituting only 5% of the population under the age of 25.

In May 2019, all children and young people in detention in the Northern Territory were First Peoples. 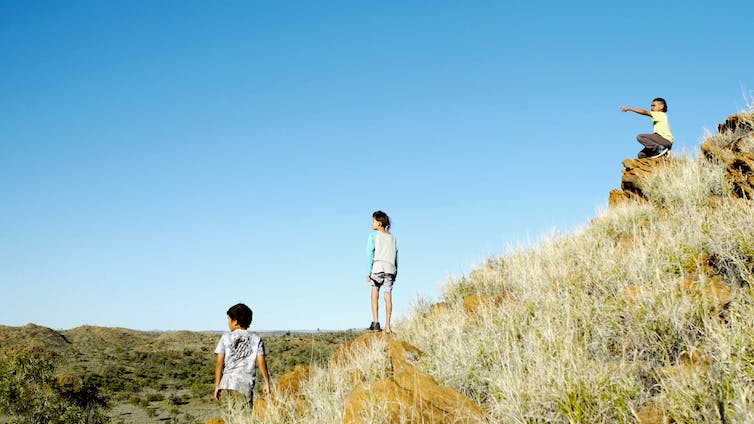 In My Blood It Runs captures Indigenous children’s awareness of a racialised divide between rich and poor in the town of Alice Springs. Maya Newell/In My Blood it Runs

In my research, I have found the incarceration and deaths in custody of Aboriginal young people is overwhelmingly framed in policy and the media as “inevitable”.

This “inevitability” is directly tied to whether a young person is compliant with the demands of the school system – a system often experienced as violent and exclusionary.

In 2018, two Noongar teens aged 16 and 17 drowned in the Swan River attempting to escape police. The two young men were labelled truants, their failure to attend school implied as an underlying reason for their death.

Directed by Maya Newell, in collaboration with the Arrernte and Garrwa families it represents, In My Blood It Runs challenges the way Aboriginal young people’s educational disadvantage and engagement with the criminal justice system is understood as inevitable.

The film represents Dujuan’s life as full, complex and dignified. It counters the dehumanising way Indigenous young people are often depicted as statistics; as criminal and almost (if not already) as at-risk; as educationally deficient.

The film reveals the violence of the education and criminal justice systems. But it also shows how families navigate through, negotiate with, and refuse to comply with these systems. 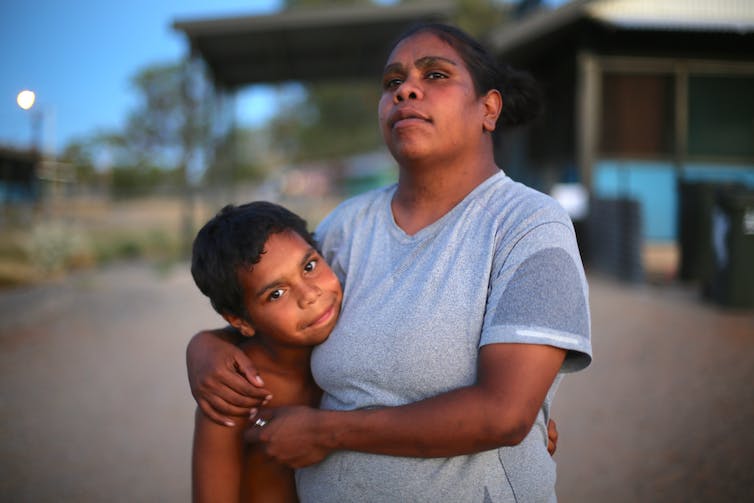 Family is central to this story. Maya Newell/In My Blood It Runs

In knowing the importance of a future where Aboriginal children and young people are free of state violence, Dujuan closed his address to the UN:

My film is for all Aboriginal kids. It is about our dreams, our hopes and our rights.

In My Blood It Runs is currently in select cinemas, and airs on Sunday, July 5 at 9.30pm on ABC and iView.