Qantas’ announcement this week of severe job cuts comes as little surprise. The COVID-19 pandemic and closed borders have brought the global aviation industry to its knees.

According to global travel data provider OAG (formerly the Official Airline Guide), this week airlines worldwide scheduled about 63% fewer flights to the week a year ago. In Australia, there were about 78% fewer flights.

Qantas’ decision to shed about 6,000 of its 29,000 workers (a further 15,000 have been stood down without pay) is part of its plan to reduce costs by A$15 billion over three years of anticipated “lower activity”.

It would be years before international flying returned to what it was, said Qantas chief executive Alan Joyce:

We have to position ourselves for several years where revenue will be much lower, and that means becoming a smaller airline in the short term. 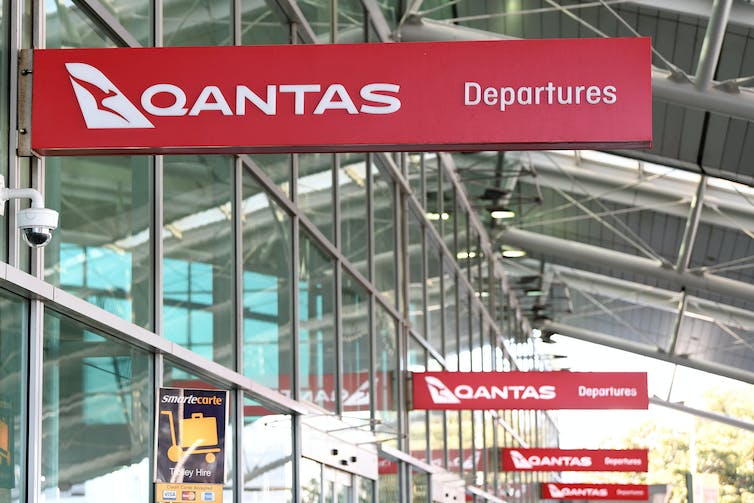 Bianca De Marchi/AAP About 100 of the airline’s 130 jets will be grounded for at least a year – some probably longer. Qantas is far from alone. Airlines all around the world are furloughing or laying off workers, along with retiring aircraft ahead of schedule, grounding large planes such as A-380s and postponing new aircraft orders. The latest US Department of Transportation data, for example, shows the number of US airline jobs fell 5% in April (representing more than 36,000 lost jobs) compared to March. May figures (yet to be published) will definitely be worse. There’s talk of a “tsunami” of airline job losses in Europe. Read more: Once the pandemic is over, we will return to a very different airline industry Past crises The aviation industry has not faced a crisis like this since the world’s first scheduled passenger airline service took off in 1914. Since 2000, however, it has suffered lesser blows. The first was the grounding of fleets following the September 11, 2001 terrorist attacks on New York’s World Trade Center and the Pentagon, coupled with recession in the US and Europe. Then came the SARS outbreak in China from 2002 to 2004. Then the recession caused by the Global Financial Crisis of 2008. Read more: Grounded aircraft could make weather forecasts less reliable Airlines shed jobs in all these crises. In the US, the number of airline jobs only returned to pre-2008 levels in 2016; and to pre-2001 levels in 2019. But the slowness of that jobs recovery is mostly attributable to airlines deploying new technology, such as automated check-in and baggage handling. This may be less of an issue in the next decade, with there being evidence most airlines have exhausted most of their capacity to replace people with machines. For example, employment in the US airline industry the five years to 2020 increased at a faster rate than the demand for air travel. Recovery within five years Nonetheless the general consensus among industry experts is that recovery this time around will not be quick. Qantas, for example, only expects to operating 75% of its pre-pandemic international flights by 2023. Read more: Plane cabins are havens for germs. Here's how they can clean up their act My own view is a bit more optimistic. I expect recovery to 2019 levels by the end of 2022, assuming the virus “behaves itself”. However, most experts believe the industry will return to its pre-pandemic growth path within about five years. In 2019 global passenger numbers grew by 4.1% (to more than 4.5 billion). At that rate, passenger numbers would double in 18 years. The impact of COVID-19 means it may now take to 25 years to get to 9 billion passengers. But the aviation sector’s long-term prospects remain robust. So if your dream is to work in the aviation sector, don’t give up. I expect the jobs recovery in the aviation business to more closely match the recovery in demand for air travel than the experience of the previous crises mentioned, when jobs growth lagged well behind passenger demand.