Joel Schumacher, who has died aged 80 in New York, never won an Oscar.

He began drinking aged nine and spent the last years of his life apologising for having made Batman and Robin (1997). He was once described in The Village Voice as a “well-oiled toxic-waste machine”.

And yet Schumacher’s body of work is profound, and his influence on contemporary Hollywood cinema indelible.

A glance at his back catalogue is testament to his talent, range, and his innate ability to spot a hit movie.

In Flawless (1999), he coaxed mighty performances from Robert de Niro and Philip Seymour Hoffman. He introduced the world to Matthew McConaughey in A Time to Kill (1996), Colin Farrell in Tigerland (2000) and Joaquin Phoenix (previously credited as Leaf Phoenix) in 8mm (1999).

To understand Schumacher’s vast contribution, we need to go back to the start of his extraordinarily eclectic career, and his costume designs for Woody Allen’s Sleeper (1973).

A sci-fi caper, in which Allen’s character awakens 200 years in the future and gets involved in bringing down a police state, is now largely overlooked, but Schumacher’s costumes remain unforgettable: inflatable onesies, the tuxedos topped with metal hats.

Here was someone with a sense of humour, sensitive to the camp excesses of genre cinema, and to how films might subvert and entertain in equal measure. This touch would serve Schumacher well – he went on to tap into longstanding entertainment trends like 70s disco, 80s Brat Pack and 90s “event” films. 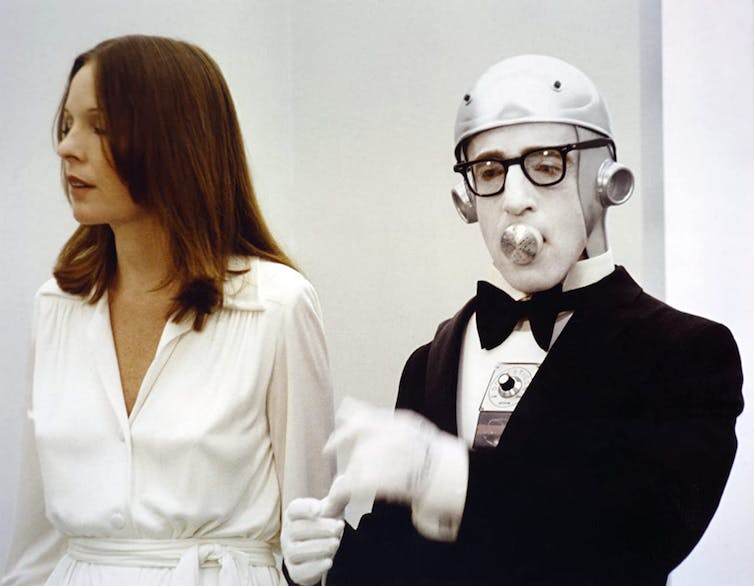 Schumacher started out as a costume designer, working on Woody Allen’s Sleeper. IMDB

He shifted to screenwriting, penning the blue-collar musical Car Wash (1976) and The Wiz (1978), Sidney Lumet’s raucous Motown update of The Wizard of Oz, with Michael Jackson as the Scarecrow and Diana Ross as Dorothy.

It wasn’t long before he moved behind the camera, debuting The Incredible Shrinking Woman (1981) with Lily Tomlin. It received a rave review from critic Roger Ebert, and kickstarted a two-decade string of commercial success.

‘A woman who gave so much, and got so little.’

1985’s St Elmo’s Fire set down the template for American coming-of-age dramas, full of characters struggling to adapt to post-college lives of responsibility and conformity.

Schumacher tweaked that formula two years’ later in The Lost Boys, another coming-of-age tale, only this time with vampires in sunny California. It is easy to forget the film’s immense cultural impact: it brought vampires into the Hollywood mainstream years before Buffy and the Twilight series.

The cast for the two hit films included Demi Moore, Emilio Estevez, Corey Feldman and Corey Haim. One of Schumacher’s most important contributions will remain his extraordinary ability to spot talent.

In the crowded early-80s film scene, stars were discovered via TV roles or moved westward from New York theatre and Schumacher’s casting nous was exemplary. Names like Keifer Sutherland, Ally Sheedy and Rob Lowe form the Rosetta Stone of 1980s American movie culture, and Schumacher fought hard to cast them all.

And then there was Batman

Film history is full of directors who shuttled across assignments, content not to leave any discernable authorial “mark”, but simply just to work, to pay bills, to collaborate with fresh-faced actors, to explore new forms. Schumacher is part of that exalted company.

Tigerland was shot in less than four weeks, and is now regarded as one of the most searing depictions of the Vietnam War. Schumacher’s adaptations of John Grisham’s The Client (1994) and A Time to Kill (1996) are benchmarks of novel-to-film transitions and foregrounded his ability to weave complex, multi-character stories in a brisk, non-ostentatious manner.

Even later films, such as The Phantom of the Opera (2004) and the Jim Carrey vehicle The Number 23 (2007) blend showmanship, schlock and glitz-and-glamour. Schumacher thus fits neatly alongside contemporaries such as Ivan Reitman and Rob Reiner. He flitted nimble from genre to genre, but he was no hack.

He was really sorry. Really he was.

And then there is Batman. To look at Batman Forever (1995) and Batman and Robin (1997) now is like peering through a cracked kaleidoscope. What were they thinking?

Nowadays, Batman is Christian Bale, broodingly directed by Christopher Nolan, weighed down with existential angst. But Schumacher’s versions – both enormous box-office hits at the time, despite the critical brickbats – arguably do something with the Batman extended universe that neither Tim Burton before, nor Nolan and Zack Snyder afterwards, were prepared to countenance: make them fun.

Realising he had been hired by Warner Brothers to shift the franchise in a more child-friendly direction, Schumacher duly obliged, and spent the rest of his career issuing mea culpas.

There was the inevitable tailing off, as there always is with directors who become unwell, or who find themselves out of step with the financial demands of billionaire studio conglomerates. But still he kept working.

Phone Booth (2002) was as high-concept as anything Hollywood commissioned at the time – what would you do if you were trapped in a street-corner telephone booth, with an assassin’s gun trained on you?

Perhaps it’s most fitting to remember him by reflecting on Falling Down (1993), with Michael Douglas as a recently fired defence worker who becomes a one-man vigilante after escaping a Los Angeles traffic jam. The film feels both of its time (Schumacher began filming the day the LA Riots broke out) and overwhelmingly modern.

It’s very hard to realise you have a calling and realise you’re not gifted. I wanted to be a director all my life, and when I finally got the chance, I was so miserably untalented.

When we reflect on his contribution to modern cinema, we see how wrong he was.