In a Conversation article a year ago we applied negotiation theory to changes to the Victorian Planning and Environment Act. The changes were designed to support local councils in negotiations with developers to secure affordable housing. A council may now negotiate with a developer to deliver or fund affordable housing as part of a development approval or planning amendment process.

We wrote that these arrangements were likely to be ineffectual. Our survey of almost 150 affordable housing stakeholders now suggests we were right about this system of voluntary negotiations.

Tellingly, a majority of each class of stakeholders – developers and financers, local government and non-profit providers – would prefer to have consistent mandatory affordable housing requirements applied to all developments.

Read more: If it's voluntary for developers to make affordable housing deals with councils, what can you expect?

What’s the incentive to negotiate?

We argued in our 2019 article that negotiations are shaped by stakeholders’ interests, the potential for mutual gains, and access to information. Our survey has since found one of the key barriers to successful affordable housing negotiations is a lack of incentives to be involved.

Respondents also identified the lack of capacity to enforce affordable housing contributions as a key issue, as the table below shows. 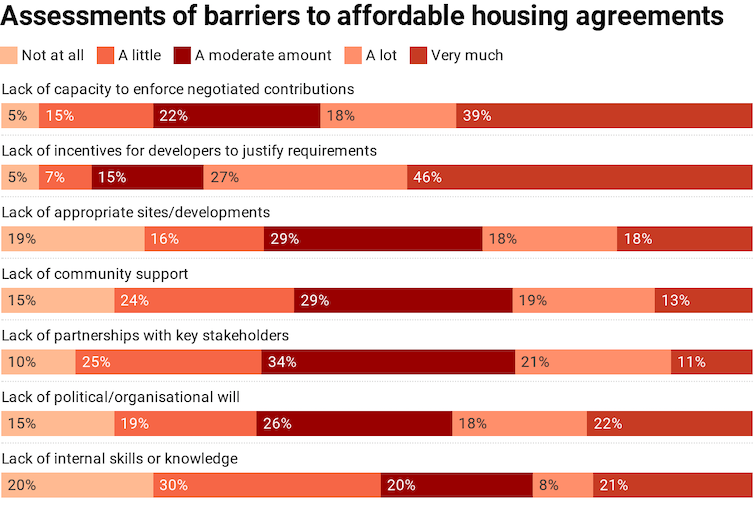 Cross-sector assessments of barriers to negotiating and implementing affordable housing agreements. The Conversation. Data: Author provided. (Percentages might not add up to 100 because of rounding)

Even when affordable housing is agreed upon, the development might not be completed for many years. Over that time, council staff may change many times. And things can slip through the cracks if no one is championing affordable housing delivery.

Researchers have identified a similar trend of non-compliance and under-compliance with sustainability requirements in building codes.

The other key barrier is a lack of effective mechanisms to give developers and councils incentives to engage in time-consuming and potentially costly negotiations.

Floor area uplift or density bonuses (allowing a developer to build more dwellings than would otherwise be permitted) are commonly offered as an incentive to build affordable housing. However, it is only effective in areas where being able to increase density is a valuable asset to a developer and doesn’t greatly add to construction costs.

Read more: Ten lessons from cities that have risen to the affordable housing challenge

How is information (ab)used?

We also found a lot of distrust in the industry. Developers referred to a “complete lack of understanding of […] commercial reality” in councils. Other respondents accused developers of looking for ways to “wriggle out of their obligations”.

Across sectors, respondents felt it was almost inevitable developers would manipulate information and operate unfairly in negotiations. Developers felt this way about local councils. 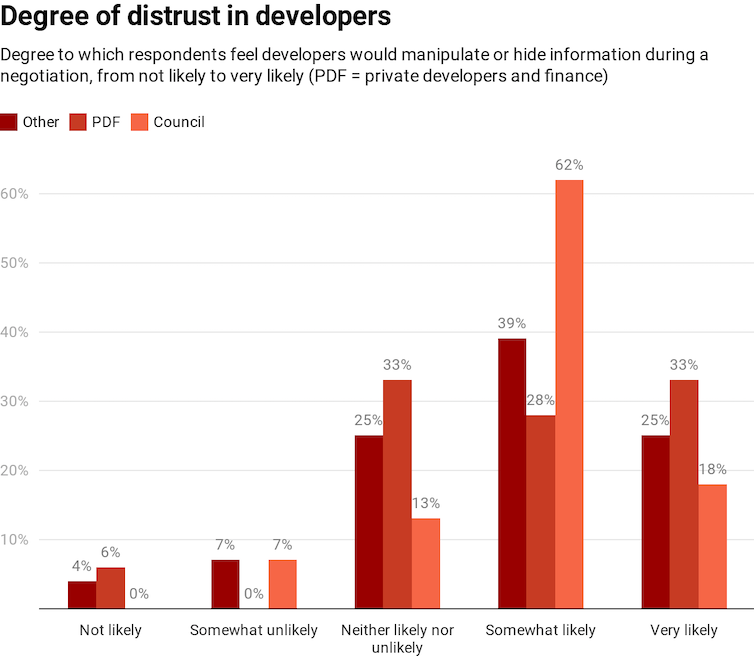 A majority of respondents felt developers were likely or very likely to manipulate or hide information during negotiations. The Conversation. Data: Author provided 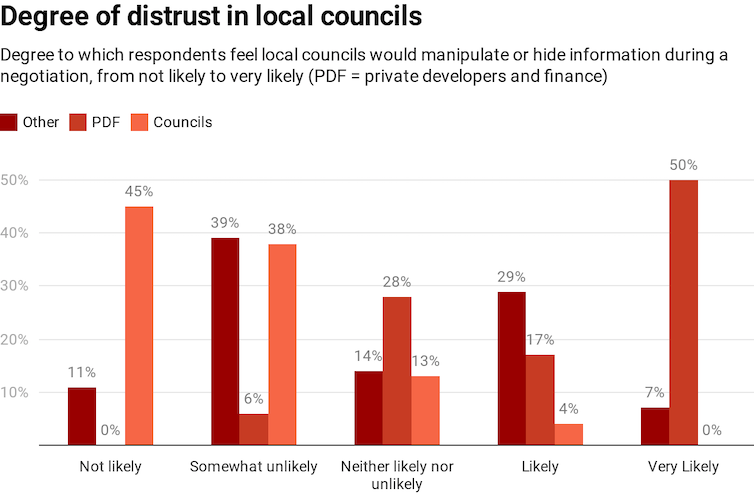 Two-thirds of developers thought councils were likely or very likely to manipulate or hide information during negotiations. The Conversation. Data: Author provided

Large variations in the skills and knowledge held by individuals across sectors add to this lack of trust. These information and skill discrepancies affect power relations in negotiations. 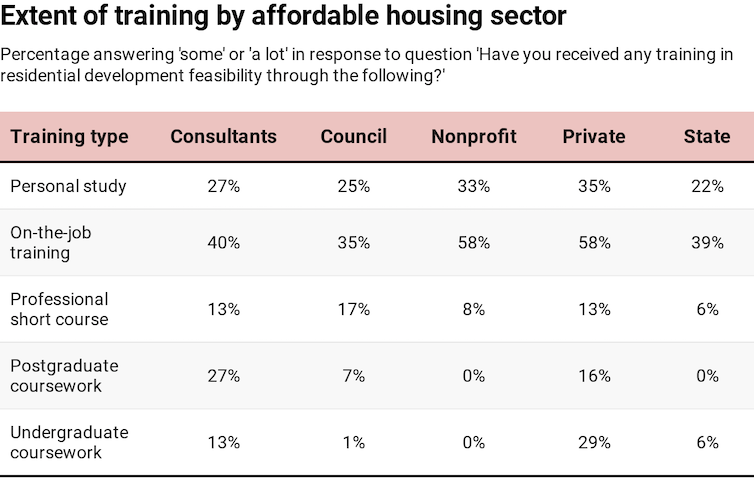 The Conversation. Data: Author provided Mandatory systems are preferred One of the key problems with voluntary negotiations is a lack of consistency in affordable housing expectations. Each agreement is negotiated on a case-by-case basis. In other parts of the world affordable housing contributions are mandatory. Developers buy land and make development decisions on the assumption that 10%, 20%, 40% or even 50% of the dwellings will be sold or rented at below-market rates. This mechanism is often called inclusionary zoning. Read more: England expects 40% of new housing developments will be affordable, why can't Australia? It works because affordable housing expectations are established in the developer’s initial feasibility analysis. These expectations are applied consistently across all sites in the area from the outset. In other countries, these requirements are often tied to financial support from multiple levels of government. The survey revealed an almost unanimous preference for an inclusionary zoning approach in Victoria. The current system of voluntary negotiations was ranked third of four policy approaches. 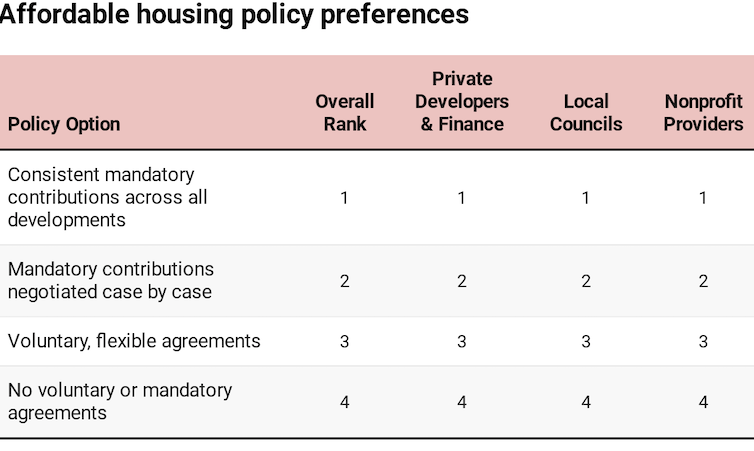 The Conversation. Data: Author provided Progress falls well short of meeting needs Despite these limitations, negotiations are happening to a modest degree in Victoria. These arrangements are producing some new affordable housing. For example, Women’s Housing Limited bought seven units for low-income women at a discounted rate in Box Hill. And in Glen Eira the provision of land for affordable housing was a key factor in a planning scheme amendment for East Village. These outcomes should be celebrated as an example of changing expectations in the development industry. They are a step forward in generating affordable housing using the planning system. However, Victoria still has a huge gap between the need for and supply of affordable housing. The state falls well short of international best practice. Read more: Public land is being sold exactly where thousands on the waiting list need housing We continue to argue that the right mechanisms are not yet in place in Victoria to ensure affordable housing negotiations are efficient, equitable and transparent. The research team are seeking people involved in the affordable housing and development sectors with experience in affordable housing negotiations to participate in interviews for ongoing research. To be involved or to find out more, please email affordable-housing@unimelb.edu.au