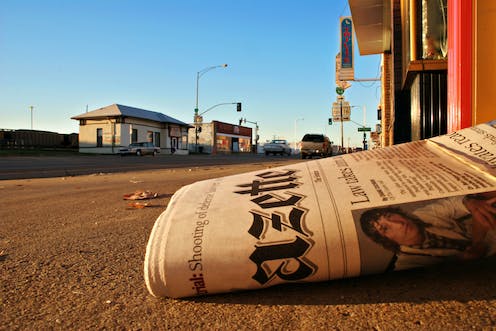 The Yarram Standard and Great Southern Star, both of which have covered South Gippsland for well over a century, won’t be returning from their coronavirus-enforced suspensions.

The two papers are the latest in a growing number of news outlets to close their doors. The economic fallout associated with the virus has been described...

The Yarram Standard and Great Southern Star, both of which have covered South Gippsland for well over a century, won’t be returning from their coronavirus-enforced suspensions.

The two papers are the latest in a growing number of news outlets to close their doors. The economic fallout associated with the virus has been described as an “extinction event” for the media – and news outlets in suburban, regional and rural areas are being particularly hard hit.

Read more: Another savage blow to regional media spells disaster for the communities they serve

These challenges have renewed interest in the phenomenon of “news deserts”: towns, communities and local government areas where the supply of news appears to have been reduced to nothing.

In June 2019, the ACCC estimated there were 21 news deserts around Australia, 16 of them in rural and regional areas. This number has almost certainly grown in the period since.

The loss of local news is a concern. Local papers fill a special role in building community spirit and social cohesion in a way that metropolitan papers do not. Research shows that civic leaders believe local media does a better job of reflecting the needs of communities than state or national media.

The closure of local newspapers has also been linked to higher borrowing costs and financial waste in local government, as well as decreasing voter turnout and higher incumbency rates for elected officials.

As a researcher at the Public Interest Journalism Initiative, I have been tracking changes in news production and availability for the Australian Newsroom Mapping Project.

Our approach is simple: we are displaying what has changed in news production and availability in Australia since January 2019.

The changes we are capturing include

We have logged over 200 contractions since the end of March alone, clear evidence of the “swift and savage force” with which COVID-19 has affected news.

Two types of change stand out: a greatly accelerated shift to digital-only publishing and the closures of newsrooms, particularly in regional New South Wales. Between them, these two types of change represent about two-thirds of all entries in our data.

Read more: Local newspapers are an 'essential service'. They deserve a government rescue package, too

Australian Community Media, publisher of about 160 newspapers in regional and rural areas, has closed most of its non-daily papers until the end of June. How many of them reopen next month is a big question: many of the changes in our data that were first described as temporary have become permanent.

News Corp’s recent announcement that dozens of community newspaper titles will be digital-only is the highest-profile example, but far from the only one.

It’s not all gloomy news

Though the map overwhelmingly indicates declining news availability, we are also gathering information about growth.

In Murray Bridge, South Australia, for example, a journalist furloughed from the Standard continued local coverage through his own initiative. In Horsham and Ararat, Victoria, rival publishers from nearby areas stepped in to fill the coverage gap with new papers.

And in the year prior to COVID-19, News Corp opened a dozen new digital community sites, including in regional centres like Wollongong and Newcastle.

Some of the contractions logged on our map have also improved as communities rally around their local papers.

The Cape and Torres News in northern Queensland, the Barrier Daily Truth in Broken Hill, New South Wales, and The Bunyip in Gawler, South Australia, are just a few examples of papers that have been able to return due to public support.

The challenge of news data maps

Any research is only as good as its data, and it is an enormous challenge to build a complete database of all news production across Australia. Missing a single publication can be the difference between listing a region as a news desert and not.

To be manageable, similar projects focus on commercial newspapers at the expense of other media, recognising the role print still has as the primary source of original news. This approach can provide a misleading picture in places where radio, TV or digital news are dominant.

There is also the question of where entries go on a map. We place geographic markers according to either the location of the newsroom or somewhere in the community that it primarily serves. That approach makes sense, but can misrepresent the scale of the problem.

Read more: The closure of AAP is yet another blow to public interest journalism in Australia

For instance, the closure of the WIN TV newsroom in Wagga Wagga, NSW, last June affected the entire Riverina, but is represented on our map as only a small red dot in the city.

It is possible to overcome these problems, but to do so is enormously resource intensive.

A new project at Montclair University in the US, for example, is mapping local news in New Jersey, including variables such as coverage areas, population density and income. The researchers are analysing the content of each media outlet to determine if the towns it says it is covering are actually showing up in its stories.

The scale of the work required to establish a reliable map just for New Jersey seems overwhelming, and it is hard to imagine how much money and time a research team would need to replicate it nationally.

Feeling ‘in the dark’ when local newsrooms close

Building other variables into our data, such as population density or journalism jobs statistics from the ABS, is an appealing idea that could bring more nuance to our project.

The underlying data for our work is open to public scrutiny and we have benefited enormously from submissions, which help us gain better insight into local media across the country.

Readers sometimes reach out to tell me about the importance of their local paper for community life. One reader of the Dungog Chronicle in Dungog, NSW, which closed in April, wrote

its closure diminishes our strength as a community, our identity as a Shire, and our willingness to take part in local decision-making.

The newspaper was first published in 1888 and covered the city for more than 130 years. The reader told me,

There is less spring in our step without the Chronicle. It has been a faithful conduit for all local news for the 30+ years that I have been here, and I feel in the dark without it.