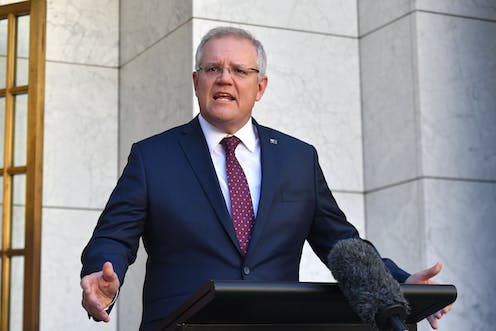 Scott Morrison maintained his high coronavirus crisis ratings. 66% were satisfied with his performance (steady) and 29% dissatisfied (down one), for a net approval of +37. Anthony Albanese’s net approval dropped four points to +3; his ratings peaked at +11 in late April. Morrison led as better PM by 56-26 (56-29 three weeks ago).

This Newspoll maintains the situation where Morrison is very popular, but the Coalition is not benefiting from his popularity to the extent that would normally be expected. Six weeks ago, when Morrison’s net approval was +40, analyst Kevin Bonham said the Coalition’s expected two party vote was between 54% and 60%.

Respondents were asked whether various organisations had a positive, negative or neutral impact on the coronavirus pandemic around the world. The World Health Organisation was at 34% positive, 32% negative and the United Nations was at 23% positive, 21% negative. Coalition voters were most likely to give the WHO and UN poor marks.

Seventy-nine percent thought the Morrison government was doing the right thing by pushing for an independent inquiry into the origins and handling of coronavirus against Chinese objections. By 59-29, voters thought Australia should prioritise the US relationship over China. There was more support for China from Labor and Greens voters.

The Queensland election will be held on October 31. A YouGov poll for The Sunday Mail, conducted last week from a sample of over 1,000, gave the LNP a 52-48 lead, a two-point gain for the LNP since the January YouGov. Primary votes were 38% LNP (up three), 32% Labor (down two), 12% One Nation (down three) and 12% Greens (up two). Figures from The Poll Bludger.

Opposition Leader Deb Frecklington’s ratings were 26% approve (up three) and 29% disapprove (down four), for a net approval of -3, up seven points. Palaszczuk led as better premier by 44-23 (34-22 in January).

This section is an updated version of an article I wrote for The Poll Bludger, published on Friday. The Poll Bludger article includes a section on the UK polls following the Dominic Cummings breach of quarantine scandal.

Since my article three weeks ago, Trump has lost about four points on net approval. His disapproval rating is at its highest since the early stages of the Ukraine scandal last November.

In the RealClearPolitics average of national polls, Joe Biden’s lead over Trump has widened to 7.2%, up from 4.5% three weeks ago. That is Biden’s biggest lead since December 2019. Biden has 49.6% now, close to a majority. If he holds that level of support, it will be very difficult for Trump to win.

Read more: When Trump attacks the press, he attacks the American people and their Constitution

Trump has over 90% of the vote among Republicans, but just 3% among Democrats. CNN analyst Harry Enten says Trump’s strategy of appealing only to his base is poor, as he has already maximised support from that section. Enten implies Trump would do better if he appealed more to moderate voters.

In the key states that will decide the Electoral College and hence the presidency, it is less clear. National and state polls by Change Research gave Biden a seven-point lead nationally, but just a three-point lead in Florida, a two-point lead in Michigan and a one-point lead in North Carolina. In Wisconsin, Trump and Biden were tied, while Trump led by one in Arizona and four in Pennsylvania.

This relatively rosy state polling picture for Trump is contradicted by three Fox News polls. In these polls, Biden leads by nine points in Wisconsin, four points in Arizona and two points in Ohio. Trump won Ohio by eight points in 2016, and it was not thought to be in play.

Ironically, Change Research is a Democrat-associated pollster, while Fox News is very pro-Trump. Fieldwork for all these state polls was collected since May 29, when the George Floyd protests began.

Other state polls have also been worse for Trump than the Change Research polls. A Texas poll from Quinnipiac University had Trump leading by just one point. Trump won Texas by nine points in 2016. In Michigan, an EPIC-MRA poll has Biden leading by 12. In North Carolina, a PPP poll has Biden ahead by four.

Concerning the protests over the murder of George Floyd, in an Ipsos poll for Reuters conducted June 1-2, 64% said they sympathised with the protesters, while 27% did not. In another Ipsos poll, this time for the US ABC News, 66% disapproved of Trump’s reaction to the protests and just 32% approved.

US May jobs report much better than expected

The employment population ratio – the percentage of eligible Americans currently employed - rose 1.5% to 52.8%, but it is still far below the 58.2% lowest point during the global financial crisis.

US daily coronavirus cases and deaths are down from their peak, and stockmarkets anticipate a strong economic recovery. But it is likely that a greater amount of economic activity will allow the virus to resurge. A strong recovery from coronavirus would assist Trump, but unemployment is a lagging indicator that is likely to recover more slowly than the overall economy.

I wrote for The Poll Bludger on May 22 that two New Zealand polls had the governing Labour party taking a massive lead over the opposition National, ahead of the September 19 election. New Zealand now has zero active (currently infected) coronavirus cases, and has had no new cases since May 22. It appears they have eliminated the virus.