Australia’s response to the coronavirus outbreak so far has been among the most successful in the world. From a peak of more than 400 cases a day, the rate has fallen to fewer than 20 new cases a day.

Australia has avoided the worst of the pandemic, at least for now. Comparable (albeit larger and more densely populated) countries, such as the United Kingdom and United States, are mourning many thousands of lives lost and are still struggling to bring the pandemic under control.

The reasons for Australia’s success story are complex, and success may yet be temporary, but four factors have been important.

The formation of a National Cabinet, comprising the prime minister and the leaders of each state and territory government, was a key part of Australia’s successful policy response to COVID-19.

The National Cabinet was created quite late – in mid-March 2020 when cases were beginning to increase exponentially – but has proved an effective mechanism to resolve most differences as Australia’s dramatic and far-reaching measures were put in place.

Read more: Explainer: what is the national cabinet and is it democratic?

Within a week of the National Cabinet being formed, Australia began to place restrictions on social gatherings. On March 22, ahead of a National Cabinet meeting that evening, Victoria, New South Wales and the Australian Capital Territory announced they were proceeding in the next 48 hours to shut down non-essential services. This helped push all other governments into widespread business shutdowns announced by Prime Minister Scott Morrison that night, to take effect the following day. 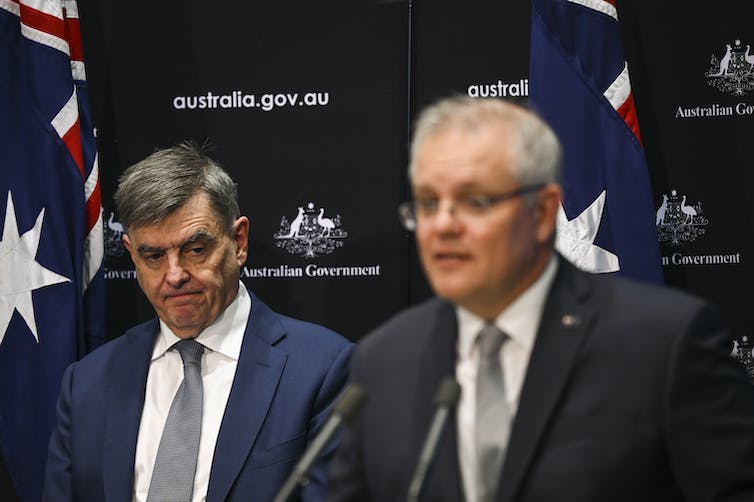 Australia’s decision to close its borders to all foreigners on March 20, to “align international travel restrictions to the risks” was a turning point. The overwhelming number of new cases during the peak of the crisis were directly linked to overseas travel, and overseas sources account for nearly two-thirds of Australia’s total infections.

A week after closing the borders, Australia instituted mandatory two-week quarantine for all international arrivals. Together, these measures gave Australia much more control over the spread of the virus.

Read more: Is it time to reopen our borders? For states still recording new cases, it's too soon

Perhaps galvanised by images of Italy’s health system on the brink of collapse, Australians quickly complied with shutdown laws. In fact, many people had already begun reducing their activity before the restrictions were imposed.

Australians’ compliance is demonstrated by the low number of community transmissions, despite having less strict lockdown laws than some other countries such as France and New Zealand. 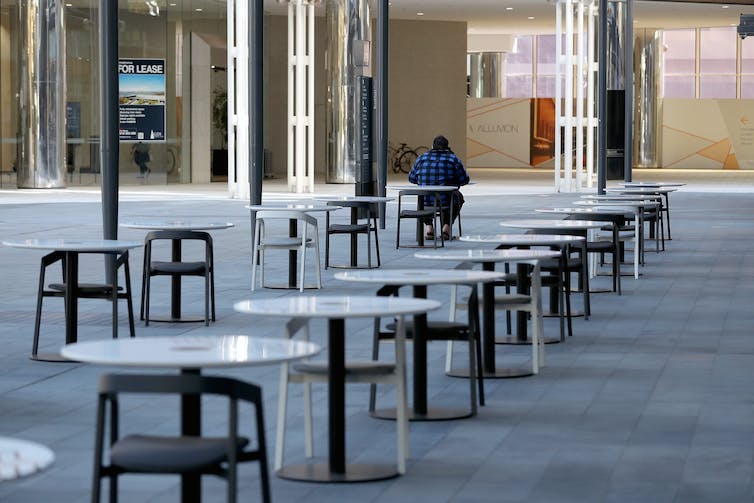 One of the federal government’s early moves was to radically expand Australians’ access to telehealth. This allows patients to consult health professionals via videoconference or telephone, rather than in person.

Read more: Coronavirus has boosted telehealth care in mental health, so let's keep it up

Unfortunately, Australia has also had failings, and it might have been in an even better position today if it had acted more decisively. Although it eventually “went hard”, the federal government spent the early weeks of the crisis mired in uncertainty.

About 2,700 passengers from the Ruby Princess cruise ship were allowed to disembark freely in Sydney on March 19, despite some showing COVID-19 symptoms. The ship has become Australia’s largest single source of infection. About 700 cases (10% of Australia’s total) and 22 deaths (about 20% of Australia’s deaths) are linked to the ship. 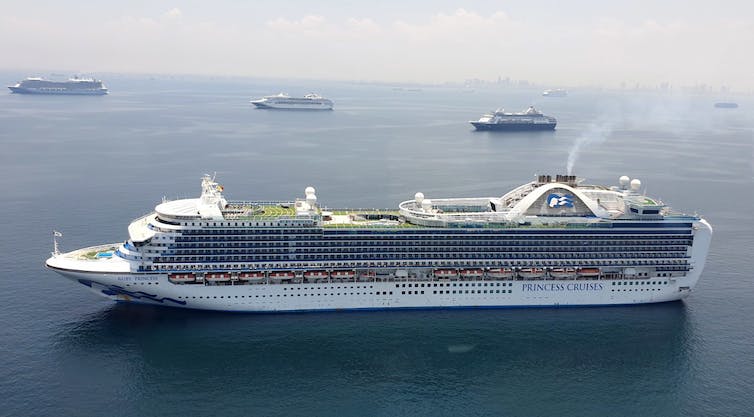 Failure 2: too slow to close borders

While Australia was comparatively quick to ban foreign nationals coming from China, it was slow to introduce further travel restrictions as the virus began to spread throughout the rest of the world.

It took more than six weeks after Australia’s first confirmed case for the federal government to introduce universal travel restrictions. Before this, restrictions were targeted at specific countries, such as Iran, South Korea and, belatedly, Italy – despite other countries such as the US posing similar or even greater risks.

Read more: Coronavirus has seriously tested our border security. Have we learned from our mistakes?

Failure 3: too slow to prepare the health system

Australia was too slow to ready its health system for the prospect of the virus spreading rapidly. When cases began to rise exponentially, Australia was ill-prepared for a pandemic-scale response.

This was particularly evident in the testing regime. At first, some people with symptoms went to community GP clinics and hospitals, without calling ahead, putting others at risk. On March 11 the federal government announced 100 testing clinics would be established, but this was only completed two months later, once the peak of the crisis had passed.

The result was that as cases began to increase in mid-March 2020, Australia suffered supply shortages for testing.

Australia also struggled to meet the rising demand for personal protective equipment (PPE). Australia’s stockpile of 12 million P2/N85 masks and 9 million surgical masks was not sufficient, and neither had it stockpiled enough gowns, visors and goggles to cope with the crisis. GPs complained of inadequate supplies hampering their work.

Eventually, on March 26, elective surgeries were curtailed so PPE could be diverted to the pandemic frontline. 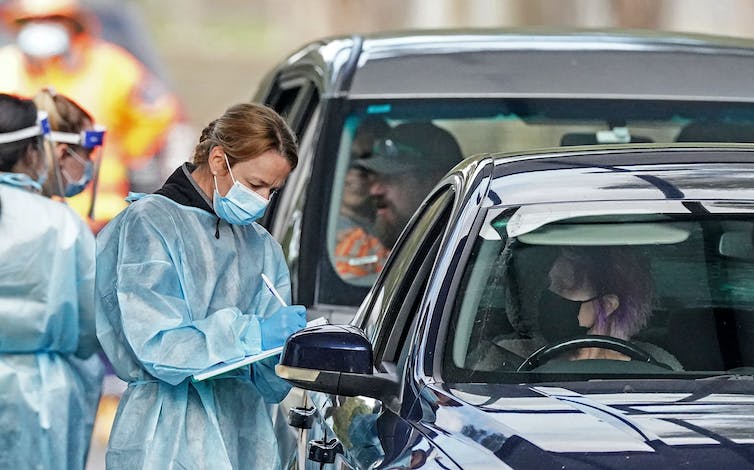 Personal protective equipment, like masks and gowns, has been slow to reach the frontline. Scott Barbour/AAP Image

The lack of a clear, overarching crisis strategy has resulted in a reactive policy approach, featuring confusing messages.

At first there was confusion about exactly which businesses or events (such as the on-again then off-again Melbourne Grand Prix) should be shut down. There were also inconsistencies between the Commonwealth’s position and the states’. For example, most states closed or partially closed their public schools around Easter and began reopening them when cases went down more than a month later. Despite concerns raised by some state governments, Prime Minister Morrison repeatedly insisted there was no risk in sending children to school. Childcare centres remained officially open throughout.

Read more: We've known about pandemic health messaging since 1918. So when it comes to coronavirus, what has Australia learnt?

The mixed messages have been particularly pronounced on Australia’s approach to the virus itself. The federal government initially talked about “slowing the spread”, but some states argued for a “stop the spread” strategy. This tension increased confusion about how far Australia’s lockdown restrictions should go. Debate raged between people who argued that “herd immunity” was Australia’s only realistic option, and those who pushed for “elimination” of COVID-19 in Australia.

Confusion reigned for too long. Even an April 16 statement from Morrison, designed to clarify the long-term strategy, conflated two different strategies by declaring Australia was continuing to “progress a successful suppression/elimination strategy for the virus”.

In the end, the case count provided its own answer. Several states began to record multiple days and weeks with no new cases, showing that elimination may indeed be possible.

Read more: We may well be able to eliminate coronavirus, but we'll probably never eradicate it. Here's the difference

As restrictions unwind, a new norm will set in. The risk of COVID-19 emerging again means Australians’ way of life will have to fundamentally change. Significant risks remain, particularly for states that ease restrictions too fast. Continual monitoring will be required to prevent further outbreaks or a second wave.