In the not-so-distant past I commuted fairly hefty distances in a fairly garbage car. But you didn’t hear me complaining – I had an extensive library of podcasts (or “my stories” as I liked to call them) on my phone.

My ride was so basic it didn’t have a stereo that could connect to my phone, so my workaround was to place the phone in the little scooped-out area on the dash where the clock lived. I called it the “acoustic enhancement chamber” and it really did amplify the sound. Most people thought this was hilarious (and a little pathetic, I guess) but I didn’t mind. Podcasts are powerful narrative devices – they still work as transfixing storytellers in the lowest of tech situations.

We all like to fill our commutes with some sort of distraction – reading a book, making obnoxiously loud phone calls on the train, cramming in some work or study on our laptops, and of course consuming a bottomless ocean of media via our mobile devices – TV shows, movies, games, and “our stories”. During the COVID-19 lockdown, many will have missed the commute – a time just for getting there, a time when we’re between spaces and responsibilities.

Between Point A and Point B

So whatever it is we do on our commute, and however we do it – walking, running, driving, cycling, flying, training, bussing, or whichever other way you get from Point A to Point B – it’s useful to consider the commute as a space of its own.

The “interstitial time” commuting creates is actually a Point C: what sociologists like Cecile Sandten have called a “third place between home and work”.

While we may not think much about this interstitial time, what we choose to do in it affects us. It has been suggested by Shira Chess, who studied games and leisure styles, that “all of our lives are characterised by interstitial time, time that is not used for other purposes”. Geographer and academic David Bissell has underscored this:

… the journey to and from work is a strange, liminal sphere of everyday life, fizzing with all manner of events and encounters that, for good or ill, make a difference to who we are.

The commute has been pondered by creative types, either as the main focus, or as a plot device. Philosopher Alain de Botton’s 2009 book A Week At The Airport saw him become Heathrow airport’s writer in residence, where he focused on the interstitial time we grudgingly endure at airports, exploring “the stories that inhabit this strange ‘non-place’ that we are usually eager to leave”. He was so into it that he was delighted when his plane was delayed, as it meant he could spend even more time in the departure lounge. 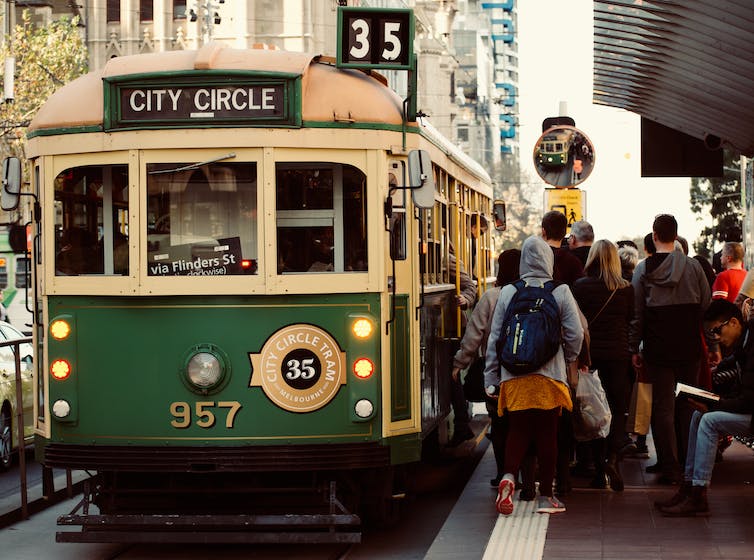 Conversely, Jonathon Swan penned The Frustrated Commuter’s Companion: A survival guide for the bored and desperate in 2017, introducing readers to “seat etiquette” and “seat remorse” and underscoring the (often) solitary nature of commuting: “Whenever you see a fellow traveller with a copy [of his book], give them the secret sign of the commuter: ignore them completely”.

Plenty of films romanticise the usually peaceful interstitial nature of commuting, which can provide a handy contrast to the flip when things go wrong. Speed (1994) is about a normal commute gone mad, while Liam Neeson stars in 2018’s The Commuter, which is about another commute that goes even more mad.

The Eternal Sunshine Of The Spotless Mind (2004) is a film that sees the leads meet for the first time (a couple of first times, actually) in a dreamy kind of limbo train commute. Finally, there’s 2016’s The Girl On The Train, in which the main character fills her days with the commute because she’s lost her job but wants to keep up the pretence of going to work.

In Simon Webb’s 2016 book, Commuters: The History of a British Way Of Life, he describes commuting as a “reassuring routine which spelled security and safety from the spectre of poverty” -– meaning in most cases, if we are commuting, we’re doing so because we have a job to commute to. 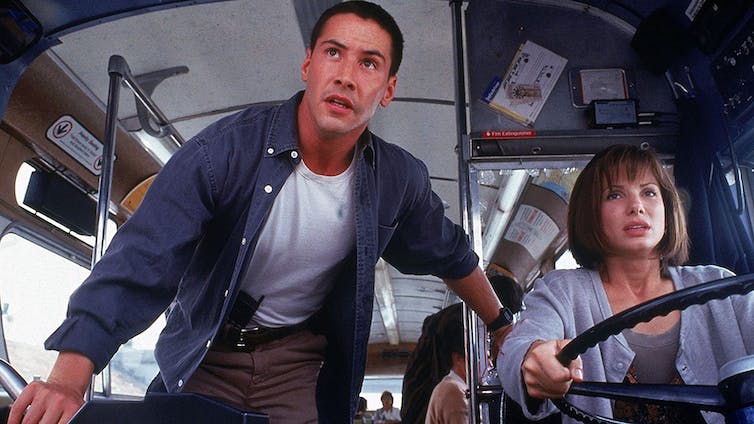 So when we’re not being blown up for going under 50 miles an hour, the commute can be a time for us to zone out, to reflect on the day ahead, or the one just finished – and to simply “be” in a personal zone that is neither work nor home.

Though a train or a plane might not seem like a private space, we make it one by staring into the middle distance, losing our present selves in thought or remembrance, or diving into our digital storytelling devices. In so doing, we can recapture a shred of our own personal space, even if we are shoulder-to-shoulder with others.

What I, and many others, choose to do during the commute is listen to podcasts.

Read more: How the everyday commute is changing who we are

Podcasts (a portmanteau that combines “iPod” with “broadcast”) are essentially episodic media delivered via a subscription feed to our devices and consumed anytime we like. These travelling companions have introduced me to a diverse cast of players: from great thinkers, to creepy killers, to kindly givers of wildly inappropriate advice.

Podcasts can be extremely short like (Quote Of The Day) or the literally titled The Shortest Podcast Ever with the curiously opaque description: “It’s brief. It’s not much. It’s a small amount”. They can be stupendously long like Hardcore History with episodes regularly running over five hours in duration – and even those are mostly single episodes in multi-part narratives.

They can be studiously factual (the New York Times podcast The Daily is the news, updated daily – but with an oft-maddening Trump focus), or deliciously speculative (Conspiracy Theories is exactly what it sounds like, but is sharply researched, with sceptical hosts).

Strangers on a train meet for the first (and not first) time.

Podcast can be about grisly crimes (Australia’s Casefile is one of the best in the inexhaustible true crime genre) or delightfully batty like Dear Joan and Jericha, in which hilariously filthy agony aunts deliver the worst advice possible.

They can track complicated long-game scams in Who the Hell is Hamish? and The Shrink Next Door, and lead you down rabbit holes, like the bizarre chapters of American history featured on The Dollop.

Some, like Dirty John, and Lore have gone on to become television series to watch at home – but never forget you heard it first on the commute.

For me, podcasts are appealing because they offer delicious and varied escapes to suit your mood, and all in the palm of your hand. You don’t even need to give them your complete attention and still they wash over you. They take you to different places, introduce you to different lives, worlds and ideas. It’s learning without reading, exploration without effort. 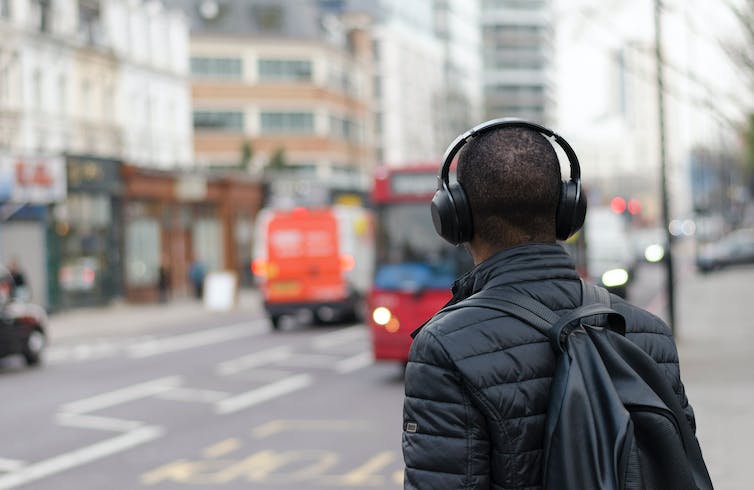 Like learning without reading, podcasts can transport us. Henry Be/Unsplash, CC BY

No commute, no podcasts?

Lately, we have almost universally been doing little or no commuting. What happens to that in between space? And what about our listening habits?

Some research shows a drop in podcast consumption. At the beginning of the pandemic, podcast downloads fell 15-20% (COVID-19 content naturally saw a boom). Now that things are slowly easing and we are returning to our regular workspaces, podcast consumption is gradually rising again.

It’s possible we have been consuming other forms of media at home as a replacement. Certainly, our Netflix binges have been a staple of Zoom discussions (Tiger King, anyone?).

Perhaps we are so preoccupied with the practicalities of being stuck at home that we have not engaged with podcasts. Or maybe they’re simply better suited to the space in between work and home, where we’ve left domesticity behind but we aren’t quite ready to clock on. These are the times when we want to turn to the little stories in our pockets for one more private escape before the business of the day takes over, and our time and thoughts belong to someone else.