This week, the federal government released a review of a relief package it put in place in April to ensure the early childhood education and care sector remained financially viable and children of essential workers, as well as vulnerable children, could continue to attend.

The review said in the week the relief package was announced

30% of providers faced closure due to a massive, shock withdrawal of families and another 25% of providers were not sure they could ever recover, even once the virus crisis has passed.

Under the emergency arrangements, the government is paying 50% of a childcare provider’s fee revenue up to the existing hourly rate cap, based on the enrolment numbers before parents started withdrawing their children because of the COVID-19 pandemic.

Childcare centres are prohibited from charging families an out-of-pocket fee, with the rest of their costs expected to be recouped through JobKeeper. Or they can limit costs by restricting the number of children in care, while prioritising children of essential workers.

On the release of the review of the scheme – due to end on June 28 – education minister Dan Tehan said the plan had “done its job” with 99% of services remaining open, and most providers saying the emergency response has helped with financial viability.

Read more: Morrison has rescued childcare from COVID-19 collapse – but the details are still murky

The package is far from perfect, and has helped most early childhood services but not all. The review reports a survey of around 54% of providers found the new payment had “at least to some extent” helped 86% of them stay open and retain staff and 76% to “remain financially viable”.

In early May, one provider of aged, disability and early childhood services, Uniting NSW and ACT, reported it was losing A$1 million a month under the scheme.

Other centres reporting heavy losses include those with high numbers of children attending already, and those where a high number of staff aren’t eligible for JobKeeper, such as if they are casuals or on temporary visas. 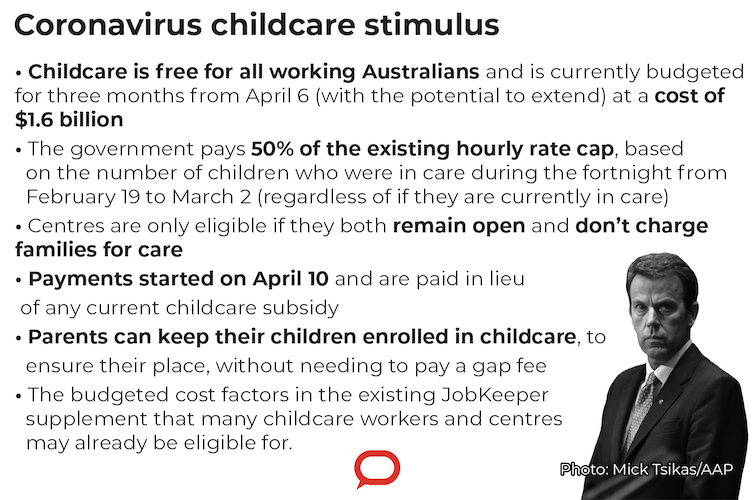 The Conversation/AAP, CC BY-ND Some who are unhappy with the current arrangements want to revert to the previous system now. Others say a preemptive snap-back would be a big mistake, risking a second existential threat to the sector. Dan Tehan has said the government is working on a transition back to the old system which “was working effectively”. As we navigate uncharted territories over the coming months, the needs and vulnerabilities of children, families and the early childhood education and care workforce must also be at the forefront of our thinking. Why we can’t just ‘snap back’ One of the main arguments for snapping back to the old system is based on increasing demand for services over the past month. But what if this demand is driven by childcare being free, and withers away once fees are reintroduced, when families are forced to cut costs? COVID-19 restrictions have resulted in skyrocketing unemployment and underemployment. For many families, the transition back to work may be irregular and unpredictable. A sharp ending of the emergency measures may leave many families unable to access care when they need to get back to work. On top of this, children’s routines have been disrupted, increasing levels of isolation and anxiety. Many children not previously considered vulnerable will now fall into this category, or become potentially vulnerable. High quality early childhood education can help reduce the risk of vulnerability. Read more: 1 in 5 kids start school with health or emotional difficulties that challenge their learning Meanwhile, early childhood providers are navigating rapid changes to attendance, staffing, funding and revenue. Under current arrangements, they are managing a steady growth in demand and a known stream of income. Reverting to the previous system will introduce a high degree of uncertainty. It will also take time and careful planning to define a way forward for the complex diversity of early childhood services. The report on the rescue package highlights how different types of services have experienced COVID-19 in different ways: while 80% of centre-based child care services reported steep declines in attendance, only around half of home-based family day care services did so. Early childhood educators are also in a tenuous position. They are among the lowest-paid Australians, with high levels of casual employment. Staff turnover is high, which undermines delivery of quality education, given the critical importance of secure relationships to children’s early learning and development. Funding certainty in the coming months will support job security, which benefits children as well as workers. A slow transition is the best Governments’ short-term focus must be on balancing the needs of children and families with economic recovery. This may begin with a gradual return to something like the previous system, adjusted to meet our changed needs. The current arrangements could be continued until September, followed by a gradual reduction, rather than a rapid rollback. After that we need some simple changes at a minimum: suspend the activity test, to remove the link between parents’ work or study situation and children’s access, so all families and children can access early childhood services allow increased absences, so families have the flexibility to keep their children home when they are unwell improve affordability, with increases to childcare subsidy rates at all income levels to a cap prioritise the needs of children most at risk, to ensure access for the most vulnerable children. We must also plan for longer-term reform to build a more stable and sustainable early childhood sector for all Australian children, which is less likely to need rescuing in the event of future shocks. With the rescue package generating calls to permanently remove fees for early childhood services, governments need to remain open to more ambitious reforms in future. Read more: Quality childcare has become a necessity for Australian families, and for society. It's time the government paid up